Even Downtown Hasn't Been Spared From Chicago's Shooting Epidemic

DOWNTOWN — The city's rise in crime hasn't escaped Downtown, where shootings are on pace for the most in a year since at least 2010.

"I don't remember anything like this ever happening," said Deborah Gershbein, president of the Streeterville Organization of Active Residents, a neighborhood group. "But there weren't as many guns randomly floating around Chicago."

Reporter David Matthews on the record pace of Downtown shootings in 2016.

The Downtown shootings so far this year have stretched from the Gold Coast to the South Loop, most of them at night but one during the day, their sum resulting in two dead victims and many others hospitalized. The tally does not include incidents in which no one was hurt, such as the shooting last weekend in and near Grant Park.

The trend mirrors one throughout Chicago, where murders are on pace for their highest total in nearly 20 years. The majority of those crimes stem from the city's South and West sides, but police say they're taking new steps to quell the violence in traditionally safer areas such as Downtown.

"Violence anywhere in Chicago will not be tolerated, and moving forward, the police department will increase its presence in Downtown neighborhoods by having plain-clothed officers wear uniforms to ensure the safety of every resident across the city," Frank Giancamilli, a spokesman for the Chicago Police Department, said via email Monday. 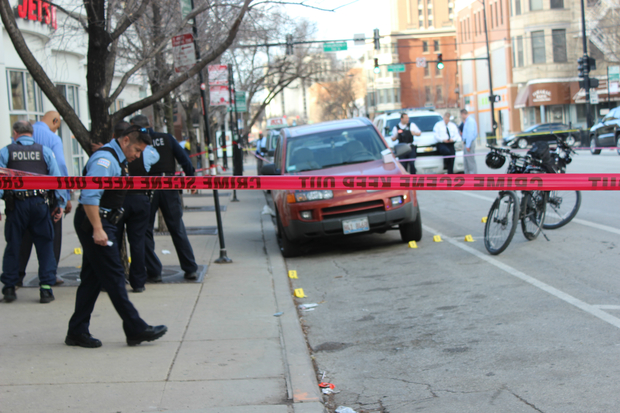 Police at the scene of a daytime shooting earlier this month near Erie and Wells streets in River North. [DNAinfo/Mina Bloom]

The record for Downtown shootings since 2010 is the 17 reported in 2013, but just five of those happened by March 31 that year. The police department does not track shootings on its website, but instead crimes that may involve a gun including murders, attempted murders and aggravated batteries. DNAinfo's crime records go back to 2010.

RELATED: Where Shootings Have Occurred in Chicago Since 2010 (MAP)

Though Downtown shootings are more prevalent, they appear isolated enough not to worry many people who live in the heart of the city. Sam London, a doorman in a Gold Coast building across the street from where a man was shot in a car last week, said violent crime is "kind of expected living in Chicago" when asked about the shooting later that day.

Gershbein, who first moved to Streeterville 28 years ago, said she's fielded only "one or two" recent phone calls from neighbors concerned about violence. Though no city official has given her an explanation for the area's uptick in shootings, she's confident police "will get a handle on it."

"These are random acts of violence, and no matter where you live, this is going to happen occasionally," she said.

Streeterville, an affluent lakefront neighborhood where nobody was shot in the first three months of last year, has been the site of three shootings since three men were shot Jan. 3 outside the W Chicago Lakeshore hotel on Lake Shore Drive. A woman was shot Jan. 24 while riding in a car near Navy Pier, and a man was shot last week while driving near Lake Point Tower.

Gershbein said her group met with Ald. Brendan Reilly (42nd), police, and other groups to discuss the crimes a few weeks ago. Though no strategies were shared then, Gershbein is optimistic now that more police presence will prevent future Downtown shootings.

"I hope it's the end of it," she said. Reilly declined to comment through a staffer.

Chicago Could See 700 Murders in 2016 As ‘Horrific’ Violence Continues

Victim in River North Shooting Near Hooters Was Targeted: Alderman