By Alex Nitkin |&nbspOctober 19, 2017 5:42am
@alexnitkin
Twitter Facebook Email More
A cardboard sign appeared Tuesday at the spot where Fost used to sleep, stamped with an old photo of the man above a handwritten inscription reading "Lewis is now in a better place."
View Full Caption
DNAinfo/Alex Nitkin

MAYFAIR — Lewis Fost, a longtime fixture of the the Metra viaduct in the 4600 block of Montrose Avenue, died last week on the sidewalk where he made his home for at least the past three years, according to officials.

Fost greeted thousands of commuters each day from his permanent post above the Montrose Blue Line station. Many would regularly stop by with food and clothes, neighbors said.

Around 8:30 a.m. Oct. 9, officers found Fost unconscious in the block he called home, police said. He was later pronounced dead.

Fost was 51 years old, according to the Cook County Medical Examiner's Office. The cause of his death has not yet been determined.

On Tuesday, a cardboard sign appeared at the spot where Fost used to sleep, stamped with an old photo of the man above a handwritten inscription reading "Lewis is now in a better place."

The makeshift shrine — later adorned with flowers, beer cans and a suitcase — was a sign of the neighborhood's learned adoration for Fost, according to Mary Kay Jenkinson McKay, who lives about a block away from the viaduct.

"He was always just sort of a fact of the neighborhood, and now he's not there when we walk by every day," McKay said. "We're pretty sad about it."

McKay was part of a rotating team of volunteers who tried to accommodate Fost's "very specific" instructions for "the kind of help he wanted and didn't want," McKay said. For her, that meant occasional deliveries of T-shirts and large Dunkin Donuts coffees.

Charities and homeless agencies made multiple attempts to find Fost permanent housing, but he always resisted, according to Harrison Morris, a case manager with the Mayfair-based Hands to Help Ministries.

"We tried to get him away from there, but he just never wanted to deal with that mess," Morris said. "He was just a nice quiet person who was down on his luck, and he gave up. And he decided he didn't want to be bothered anymore."

Fost had long been battling drug addiction, a disease that made him frail in the last years of his life, according to Morris.

He almost always sat in silence, but other homeless people who spent nights in the viaduct described Fost as a "kind-hearted, care-giving guy," Morris said.

Ald. John Arena (45th) and Ald. Margaret Laurino (39th), whose wards converge on Fost's home block, had both repeatedly tried to get him off the street during the winters, they said.

Arena regularly stopped by the viaduct to drop off Fost's preferred meal: Burger King whoppers and Diet Coke with no ice, he said.

"To the credit of our community, people always looked at him and saw a person they wanted to help," Arena said. "People tried to make the environment he was in a little better, however they could, but unfortunately, there just wasn't a path for him."

Fost is survived by a brother, according to Morris and McKay. 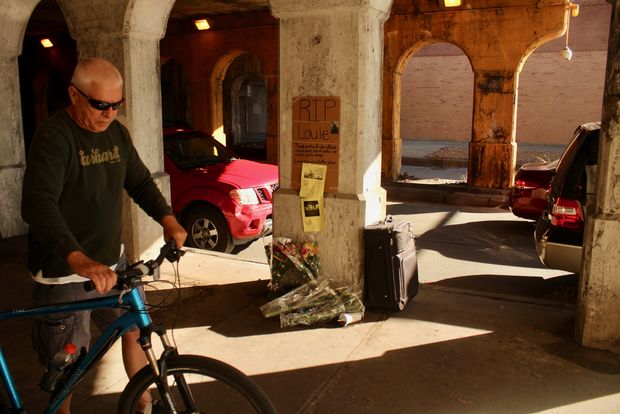 Jeff Danhoff, who often saw Fost under the viaduct, stops to look at the memorial. "He was out here so long, somebody must have really cared for him," Danhoff said. [DNAinfo/Alex Nitkin]