Lakeview Crime Sees Steep Increase, But Is It Worse Than 10 Years Ago?

LAKEVIEW — It's become a common refrain in Lakeview that the neighborhood isn't as safe as it used to be.

While some residents long for decades past, police data shows Lakeview is safer than it was 10 years ago. But the downward trend could be at an end, as a spike in crime this year could be the worst since 2003.

Crime in the neighborhood had hit its lowest point in over a decade, according to a DNAinfo analysis of city crime data. Last year, there were roughly seven fewer robberies each month compared to 2005 — a decline of 30 percent — and burglaries dropped 60 percent.

But this year has seen a marked rise in crime in Lakeview, reflecting a uptick citywide, where the number of shootings has skyrocketed in 2016. If the increase continues as the same rate, this year could see the steepest rise in crime in 13 years.

While major crimes in Lakeview have been on the decline over the past decade, a significant uptick so far in 2016 could signal the steepest increase since 2003. The 2016 figures are projections that combine the actual incidents that occurred between January and July with an estimate for the final five months of the year, calculated based on the proportion of those types of crimes that occurred during those months between 2003 to 2015. [DNAinfo/Tanveer Ali]

Even with the rise, Lakeview is in better shape than a decade ago, if the numbers can believed: Two years ago, reports surfaced suggesting the Chicago Police Department underreported crime, particularly the type of property crimes that more commonly affect Lakeview residents than homicides and shootings.

Police sources told Chicago magazine in 2014 that it was common to downgrade offenses, clump together multiple crimes as a single incident and discourage people from filing reports.

Like in the '80s, it's possible correcting such practices led to the rise in reported crimes. While the FBI's tracking of index crimes presents a more uniform view for Chicago as a whole, only the city's data breaks down incidents by neighborhood.

In 2015, there were 32 percent fewer major crimes reported in Lakeview — homicides, robberies, assaults, sexual assaults, batteries, burglaries and thefts from vehicles — than in 2005.

Burglaries dropped the most, from 748 reported in 2005 to 286 reported in 2015. Of those, the burglaries involving forced entry — as opposed to access through unlocked doors or windows — fell 65 percent.

Thefts are not included in the analysis, as CPD switched to reporting only felony thefts — those involving $500 or more in stolen property — in 2011.

Homicides are rare in Lakeview, making that data less significant when considering trends in crime. The shooting death of Kevin O'Malley last year came after there were no homicides in 2013 or 2014. There also was a shooting in February that killed 55-year-old Lazane Clark.

The rate of crime aligns with the number of incidents over time, as Lakeview's population has remained steady. Between 2000 and 2010, the neighborhood lost just 449 of its 94,817 residents, census data showed.

The news isn't all good: While 2014 had the fewest incidents in 13 years, 2016 could mark the steepest year-to-year rise in Lakeview crime since 2003.

This year, those major crimes could increase by almost 12 percent* compared to 2015, signaling a potential reversal of the downward trend over the past decade. Through July, the 275 burglaries this year represent a 114 percent increase when compared to the same period last year, while robberies are up 60 percent.

The most recent data comparing Lakeview crime in 2016 to recent years shows a significant uptick in burglaries compared to the first seven months of 2014 and 2015. [DNAinfo/Tanveer Ali]

However, 2016 could also prove to be merely a bump in the road, much like 2012. And even with the rise, projections remain lower than crime totals in 2006 by about 30 percent.

Both in 2011 and 2012, crime rose by 11 percent year-over-year. But the two years that followed had drastic declines in reported crimes that coincided with the merger of the Chicago Police Department's 19th and 23rd districts.

The merger was widely criticized, both at the time and in the years following. Despite promises to the contrary, the number of officers in the district dropped 30 percent — almost 140 officers — in the three years following the merger.

Because of the merger, DNAinfo tallied crime in the Lakeview community area for consistent figures. The city defines Lakeview boundaries as west of the lakefront to Ravenswood Avenue and generally from Diversey Parkway to Irving Park Road, with a tail extending up to Montrose Avenue between Ravenswood and Clark Street.

Neighbors and local media have fastidiously tracked the decline in manpower in the consolidated Town Hall District. Also known as the 19th District, it encompasses Lakeview and parts of Uptown, Lincoln Park, Lincoln Square and North Center. 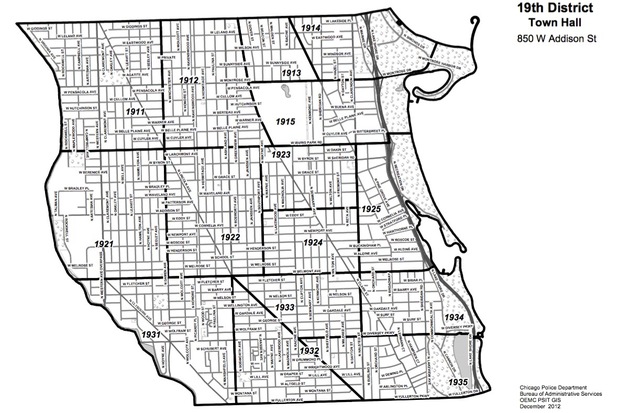 A map of the Town Hall District, which consolidated the 19th and 23rd districts in December 2012. [Provided/Chicago Police Department]

While the plan got off to a shaky start, the district has 41 more officers than it did a year ago, putting it two short of its goal for 2016 with four months to go. With 374 officers, manpower is at its highest point in three years.

In response to recent shootings on the lakefront, Cappleman said he is working with the Chicago Park District to guard the entries to Lincoln Park at Belmont and Irving Park Road — extending from entries that already have guards at Montrose, Wilson and Lawrence.

Tunney said his staff inspects crime data "on a micro level" to see how and when police respond to different areas of the neighborhood as a way to best utilize the resources Lakeview is given.

"My commitment is to make sure people know I care about safety, and I take it very seriously — any crime in our neighborhood," Tunney told DNAinfo.

Over the past 30 years, Lakeview has largely done away with the gang activity of the 1980s and created a safe haven in what used to be an area heavily afflicted by violent crime, Tunney said.

"People come in with the perception that it is really a safe neighborhood," he said. And with that, some newer residents might get too relaxed when it comes to the necessities of city living, like locking all doors and avoiding solo walks late at night, Tunney said.

The district is also trying to step up its presence in entertainment districts like Boystown, Wrigleyville and the busy area around the Belmont "L" station, officials said. All fall within the 1923, 1924 and 1925 police district beats, where violent crime doubles compared to other parts of the neighborhood.

But the successes beg the question: Why is crime on the rise now?

It's possible people are simply reporting crimes more frequently or following through with dispatchers to ensure the crime is documented. Without the victim filing a police report, crimes go uncounted. 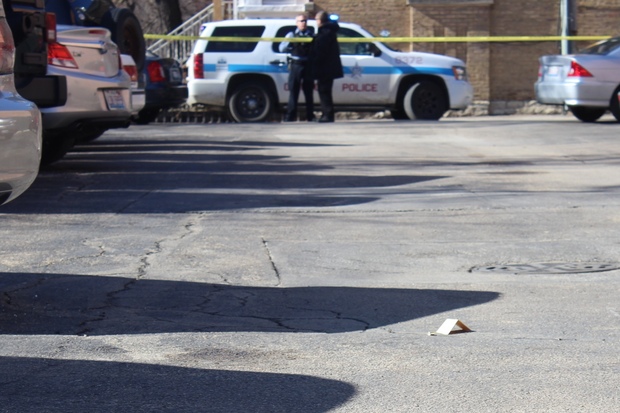 An evidence marker rests in a blocked-off parking lot in the northwest corner of Halsted and Oakdale in February following a fight that left a 55-year-old man in critical condition from a gunshot wound. The man, Lazane Clark, later died. [DNAinfo/Ariel Cheung]

"We need you to pick up the phone and call," an officer said during an Aug. 3 CAPS meeting. "You know your neighborhood — you know who belongs on the block and who doesn't."

But angry neighbors noted a disconnect between the advice and their own experiences, criticizing long waits for officers to arrive as a deterrent for victims and their ability to file a police report. Some residents say they have given up waiting — meaning no report gets filed.

There's also a deep-seeded doubt in police-reported crime statistics. The #crimeisdown hashtag has been a constant presence on Chicago timelines since it was first used as an apparent jab at the Chicago Police Department in 2013.

"People can bend and stretch numbers any way they want," resident Michael Smith said at the time. "No one wants to sit in those meetings to have them crunch the numbers the way they want."

* The 2016 figures are projections combining actual incidents that occurred between January and July with calculations for the final five months of the year. The calculations were based on the proportion of those types of crimes that occurred during those months between 2003 to 2015.