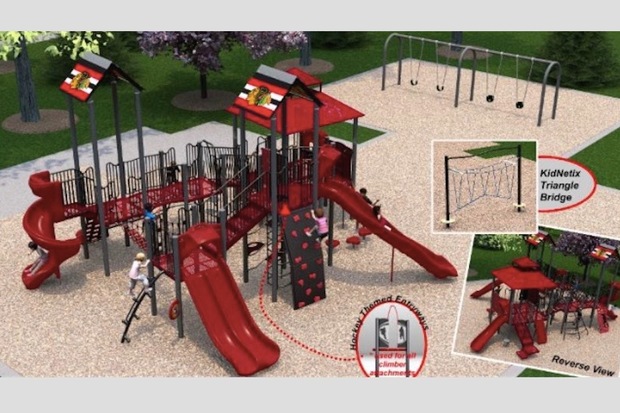 Plans call for the main play structure at Edison Park to be adorned with the Chicago Blackhawks' famous Indian head logo, and each entrance would be hockey-themed. [Edison Park Chamber of Commerce]

EDISON PARK — A plan to turn the playlot at Edison Park's namesake park into a shrine to the Chicago Blackhawks and honor native son and CEO John McDonough "needs help" after a five-month effort to raise $150,000 has brought in less than $30,000, Edison Park chamber officials said.

Chamber officials have been working for years to turn the rotted, rusted, drab and dangerous playlot into a one-of-a-kind playground and honor McDonough, an Edison Park native. In April, officials announced the Chicago Plays program would contribute $125,000 in new equipment to the playlot and launched a $100,000 fundraising effort to turn it into a shrine to the Stanley Cup champions.

"We are far from our goal and need your help," Edison Park Chamber of Commerce director Melissa McIntrye wrote in an email to chamber members and residents.

McIntrye did not return email messages and phone calls last week from DNAinfo Chicago about the fundraising effort.

It is not clear why the original announcement from chamber officials and former Ald. Mary O'Connor (41st) set a $100,000 goal for the playground fundraising effort, but recent messages from the chamber set the goal at $150,000.

A spokeswoman from the Chicago Park District did not return an email message about whether the fundraising effort faced an imminent deadline.

Plans call for the main play structure to be adorned with the team's famous Indian head logo, and each entrance would be hockey-themed.

The playground at 6755 N. Northwest Highway would also feature a swing set and a triangle-climbing bridge, according to the plans.

The playlot was last renovated in 1984, and is typically empty despite its location in the heart of the Edison Park business district. 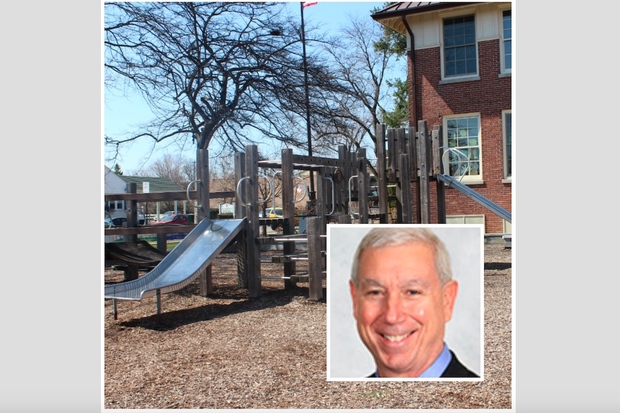 An effort to turn the playlot at Edison Park's namesake park into a shrine to the Chicago Blackhawks and honor native son and CEO John McDonough has brought in less than $30,000, officials said. [DNAinfo/Heather Cherone; Chicago Blackhawks]

McDonough brought the Stanley Cup to a rally on Northwest Highway in Edison Park on Aug. 29, dedicating the trophy to the neighborhood's residents.

McDonough joined the Blackhawks in 2007, and has been president and CEO since 2011. He also spent two decades with the Chicago Cubs.

The playlot fundraising effort tried to capitalize on the Blackhawks' playoff run and Stanley Cup victory, raffling off tickets to win what organizers called the "ultimate fan package" featuring tickets to a game and a trip to the team's locker room.

Local restaurants also hosted events to benefit the playground, donating a portion of their receipts and holding raffles during the playoffs.

After winning their third Stanley Cup since 2010, the Blackhawks are in the midst of a tumultuous off season, including the ongoing investigation into whether star player Patrick Kane raped a woman on Aug. 2 at his Hamburg, N.Y., home.

As a result of the investigation, EA Sports removed Kane from the cover of its "NHL 16" video game.

In an effort to jump start the fundraising effort, the chamber is selling $50 tickets for a chance to win a 50/50 raffle that could have a grand prize of $50,000, officials said.

Donations to the playground renovation effort can also be made online, organizers said.