Western Flyover Is Gone, Now What? Neighbors Have A Vision For Development

ROSCOE VILLAGE — For decades, development in North Center faced a significant barrier on Western Avenue — the hulking flyover where the street intersects with Belmont and Clybourn avenues.

With the dilapidated overpass now demolished, properties formerly overshadowed by the concrete mass, including some sizeable vacant parcels, are being viewed in a new light.

"When I drive down Western now, I just see a lot of potential," said Dave Kerber, president of the Roscoe Village Neighbors board.

The big question for the neighborhood association is what those changes will mean for Roscoe Village.

Rather than take a wait-and-see approach, the organization, which has an active zoning and land use committee, opted to proactively commission a market study and framework to guide "smart development," Kerber said.

"For us to do this, it was significant commitment. We really wanted to think this through," he said.

Though the association has no official say in approving or nixing development proposals, the framework indicates the types of projects most likely to find favor with Roscoe Village residents and business owners, who were canvassed throughout the process of creating the framework, Kerber said.

"The idea was to have a tool for people to point to," he said.

The final document, which was released in early October, includes a blueprint that represents the ideal development scenario.

Developers "can choose to discard it," Kerber conceded, but added, "hopefully they read through it."

Among the plan's recommended guidelines:

• Establish the area south of Belmont as a warehouse-style district that creates a hub for galleries, artisans, makers and live/work spaces.

• Explore opportunities to tie Roscoe Village to the North Branch of the Chicago River, both physically and from a marketing standpoint.

• Redevelop auto-related sites, such as car dealerships and auto repair shops, as they become available and discourage the construction of new auto-related uses.

• Any new strip mall centers should place parking in the rear or minimally to the side in order to create a more pedestrian-friendly environment.

• Prioritize ground-floor retail or commercial use at street corners. 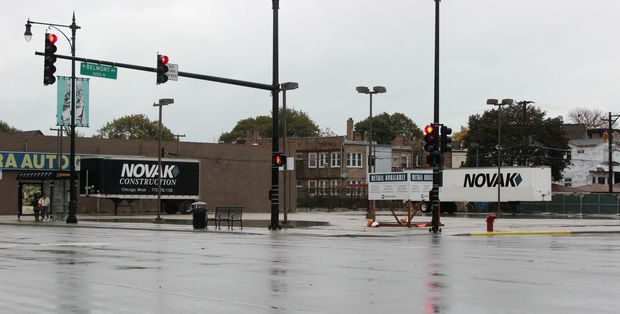 Properties formerly overshadowed by the overpass are now being seen in a new light. [DNAinfo/Patty Wetli]

Then and now: Roscoe and Western, before and after the viaduct's demolition. [DNAinfo/Patty Wetli] 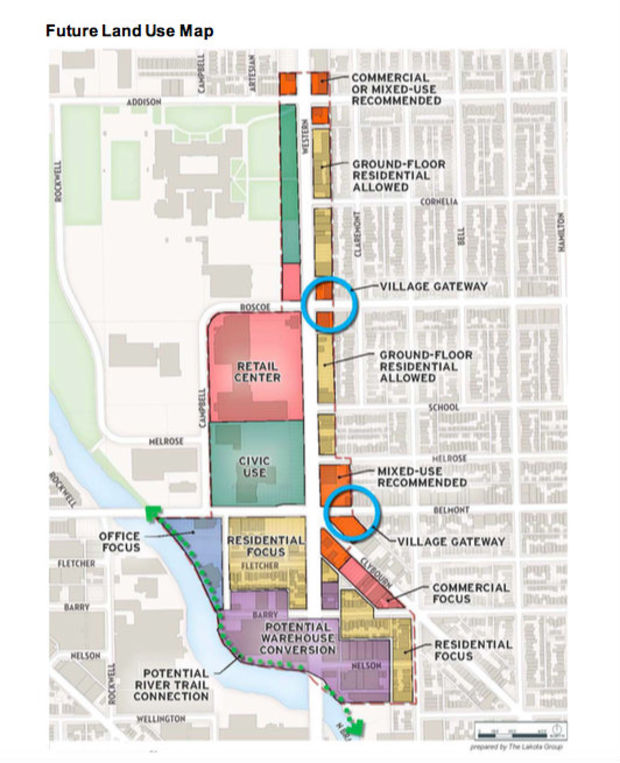 A blueprint for development. [The Lakota Group]