ROSCOE VILLAGE — It used to be Chicago's defining area code. Now 312 has a new meaning.

On Wednesday, Mayor Rahm Emanuel announced the 312 RiverRun: three parks, connected by a single path that stretches for nearly 2 miles on the Chicago River, from Belmont to Montrose.

"It combines the Riverwalk and the 606 into something new," said Emanuel.

Elements of the 312 RiverRun have been in the planning stages for years. On Wednesday, city officials broke ground on the first phase of the path, the highly anticipated Riverview Bridge, which will, in parts, soar 18 feet above the river.

The bridge will provide pedestrians, cyclists and runners with a link between Clark Park on the east side of the river and California Park on the west.

The second component of the 312 RiverRun includes repairs to the Irving Park Road bridge and the subsequent construction of an underbridge that will unite California and Horner Parks.

The vision is for the path to create a campuslike atmosphere among the three parks, which span Roscoe Village/North Center, Avondale, Irving Park and Albany Park.

The breadth of recreational opportunities offered by the parks is "second to none," said Chicago Park District CEO and Supt. Michael Kelly, who ticked off amenities including ice rinks, tennis courts, dirt bike jumps, baseball diamonds and the WMS Boathouse rowing facility.

But accessing all of those options has been challenging for residents, with the parks cut off from each other by major roadways and the river itself, Kelly said.

With the RiverRun, people will be able to easily bike, walk or jog up and down the river between parks, he said.

The linkages will be "transformative" and another "iconic addition" to the city's infrastructure, said Rebekah Scheinfeld, Chicago Department of Transportation commissioner.

Emanuel has long touted the Chicago River as the city's second waterfront — a backyard to Lake Michigan's front yard.

"These are neighborhood investments," he said of the RiverRun. "This is for all the families who don't want to drive to the lake. Now you can run along the water in your neighborhood."

The 312 RiverRun represents a major step toward the goal of a continuous path along the entire riverfront.

Construction of the Riverview Bridge, which will be the longest pedestrian river bridge in the city, demonstrates that it's possible to overcome gaps along the waterway where there's a lack of available land, said Jim Merrell, advocacy director for the Active Transportation Alliance.

Margaret Frisbie, executive director of Friends of the Chicago River, said the trail would attract new people to the river and introduce them to the waterway's magic, its potential and the need for ongoing activism.

"You're building advocates to join in the work we're doing," Frisbie said.

Work on the Riverview Bridge is expected to run through next year and possibly into 2019, Scheinfeld said.

Repairs to the Irving Park Bridge are expected to get underway in 2018, she said.

The projects are being funded with a combination of local, state and federal dollars. 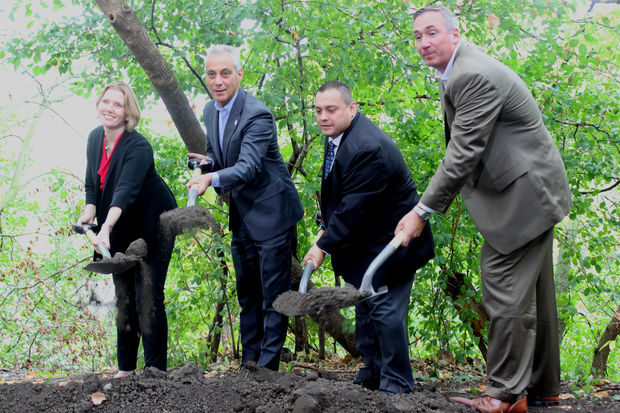 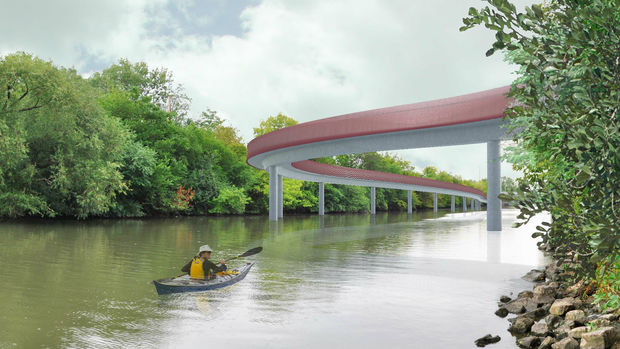 The height of the Riverview Bridge will allow recreational paddling to continue on the waterway below. [Chicago Department of Transportation]

RELATED: The Cool Bike Path That Will Soar Over the River Has a Name and Start Date