Last Chance To Ride No. 11 Bus, Route Is Gone As Of Friday

By Patty Wetli |&nbspAugust 31, 2017 9:30am
@Pattydnachicago
Twitter Facebook Email More
The long saga of the No. 11 Lincoln Bus route comes to an end on Friday.
View Full Caption
DNAinfo/Patty Wetli

LINCOLN SQUARE — Riders have one last day to get on board the No. 11 Lincoln bus — as of Friday, it will be gone. Again.

For supporters, it's a disappointing end to a saga that began in 2012, when the Chicago Transit Authority axed the Western-to-Fullerton leg of the route, having deemed the No. 11 duplicative of Brown Line rail service.

Constant lobbying — by residents, chambers of commerce, and Ald. Ameya Pawar (47th) and Ald. Michele Smith (43rd) — for the return of the route paid off in 2016 when CTA announced it would revive the canceled leg on a trial basis.

Victory was fleeting, as ridership along the route never approached the target set by CTA to retain service.

A year into the trial, which was extended from its original six-month period, the transit agency announced it was pulling the plug on the No. 11.

How to save the No. 11 bus route? Supporters plan to show up at a CTA board meeting ... by the busload.

Residents pleaded with CTA board to reconsider eliminating a key segment of the No. 11 Lincoln route.

Pawar is launching a survey and deploying street teams to build a case for the route's return.

The survey on the elimination of the No. 11 Lincoln bus is available online and in paper form.

The fight over the No. 11 bus continues as supporters aim to turn out in force for CTA's budget hearing.

Fans of the No. 11 Lincoln bus packed the CTA's annual budget hearing to rally for the route's return.

Two years after the bus route was chopped, residents and businesses continue to push for its return.

Pawar said they're out to bring back the No. 11 Lincoln bus and the 31st Street line.

• November 2015 The No. 11 Bus On Lincoln Avenue Is Coming Back, CTA Announces

CTA President Dorval Carter restored the No. 11 Lincoln bus on a pilot basis.

The No. 11 Lincoln Bus is set to start rolling again June 20, according to Pawar.

Lack of rush hour service has supporters saying routes are doomed to fail.

A six-month pilot return of the No. 11 Lincoln Avenue bus kicks off.

"For the Love of the #11" will hit three bars along the route, from Lincoln Square to Lincoln Park.

• December 2016 No. 11 Bus Gets 6-Month Extension, But CTA Says More Marketing Is Needed

It will cost about $385,000 to operate the extended route another six months, the CTA said.

A Valentine's campaign is asking riders to #lovethebus.

The year-long pilot for the No. 11 Lincoln bus has nearly reached its end.

Robynne Wallace has boarded the bus at all times, in all directions, gathering comments from riders.

The CTA extended the route's pilot through Sept. 1 while the transit agency debates the No. 11's future.

• August 2017 CTA To Pull Plug On Western-To-Fullerton Leg Of No. 11 Lincoln Bus

A pilot restoring service on the route did not attract enough riders and will end Sept. 1. 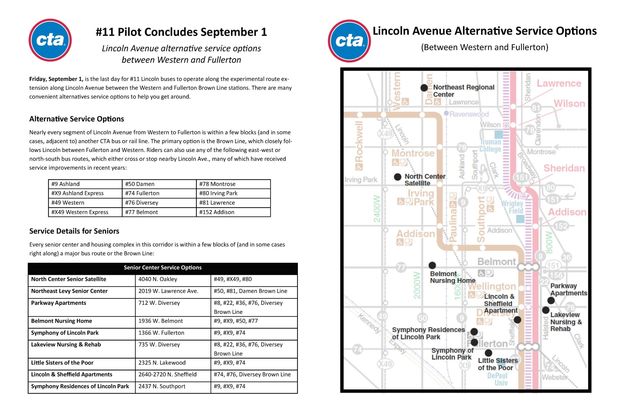