LABAGH WOODS — It's official: the North Branch Trail now reaches three miles deeper into the city's Northwest Side than it did last year. The 22-mile asphalt path now leads cyclists and hikers directly from the Chicago Botanic Gardens in suburban Glencoe to the doorstep of the North Mayfair neighborhood.

City and county officials mounted up and broke in the new path themselves at its official ribbon-cutting Saturday at the Irene C. Hernandez Picnic Grove, 4498 W. Foster Ave., the trail's new southern end.

Nearly a decade in the making, the new stretch of trail makes good on its promise to "extend access to tens of thousands of people in the city of Chicago," according to Cook County Forest Preserves Supt. Arnold Randall.

"Within 30 seconds on this trail you will be immersed in nature, and that's really an unusual circumstance in an urban environment," Randall said. "There's an opportunity to ride for miles and miles, and get free from some of the urban stresses that we all have here in the city."

It was completed in two phases.

The Forest Preserves last year opened a 1.8-mile addition extending the path from Devon and Caldwell avenues in downtown Edgebrook to the southern tip of the Forest Glen Woods, 5420 N. Forest Glen Ave. The newest piece ducks under Cicero Ave. and the Edens Expy., snaking through the Labagh Woods and emptying onto Foster Avenue.

Together, the forest preserves and the city's transportation department are knitting together an intricate network of bike and pedestrian paths "just like the interstate," one piece at a time, Ald. Margaret Laurino (39th) told a crowd of cyclists at Saturday's ribbon-cutting.

"This is what people in our community want to see, a more walkable neighborhood," Laurino said after the ceremony. "They want to be able to utilize the Forest Preserves in a way that isn't just coming to the edges for a picnic."

For cyclists, it's just a skip from Forest Glen Avenue to a buffered bike lane on Elston Avenue. They can take it southeast to Lawrence Avenue and pedal all the way east to the Lakefront Trail.

Cyclists taking the reverse route from the lakefront can traverse the entire North Branch Trail and either turn for home at the Botanic Garden or continue on from the garden to the Green Bay Trail and connect with more paths north to Wisconsin.

The next planned addition to the bike network, the Weber Spur trail, would run about 1.3 miles from Elston Avenue in Mayfair to Devon Avenue at the border of suburban Lincolnwood, crisscrossing the North Branch Trail along the way. 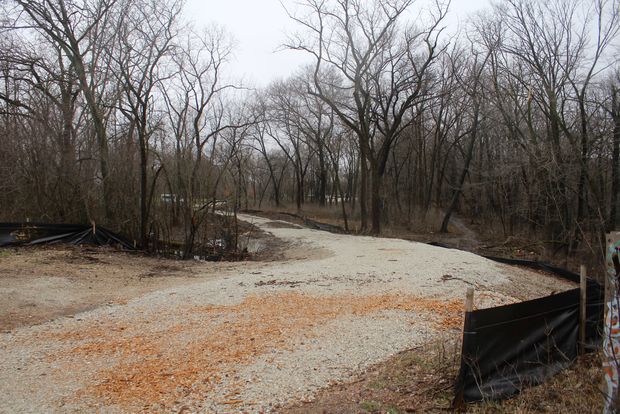 Gravel still covers much of the Weber Spur trail, runs from Devon Avenue to Elston Avenue in Sauganash to Elston Avenue in Mayfair. City transportation officials hope to pave and open the trail, but first they must acquire the land from Union Pacific. [DNAinfo/Alex Nitkin]

But that project is held up until the city inks a deal with the Union Pacific railroad company, which still owns the long-defunct train line.

Last week, city and county officials unveiled a plan to paint bike paths along Devon Avenue in downtown Edgebrook, leading off from the North Branch Trail.

As a hook to get more people using the extended trail, the Forest Preserves launched a social media campaign called Postcards from the North Branch Trail, offering up prizes to those who document their trips.

The campaign encourages trail-goers to pose inside any of six life-sized postcards planted all along the trail, then post the photo to Facebook, Twitter or Instagram with the hashtag #NBTpostcard. They'll be entered into a drawing for a raft of prizes, including zipline course tickets and vouchers for bike or kayak rentals.

Six life-sized postcards are scattered along the North Branch Trail, including one at Irene C. Hernandez Woods. Trail-goers can post photos with the props to social media with the hashtag #NBTpostcards for a chance to win prizes. [DNAinfo/Alex Nitkin]

Users can navigate the more than 300 miles of Forest Preserves trails on an interactive online map.

The North Branch Trail Alliance of Greater Chicago will take advantage of the new pathway with its August Brew Ride on Aug. 26., starting at the Alarmist Brewing taproom, 4055 W. Peterson Ave.