LITTLE ITALY — It's a question developer Jacques Sandberg has been asked since the CHA released its earliest plans to build a library at the base of a CHA apartment building on Taylor Street: Can't we just have a library?

In short? No way.

Sandberg and city officials laid out the financial reasoning behind plans for the new Roosevelt Library, which will anchor a seven-story mixed-income building for Chicago Housing Authority low-income renters, affordable housing and market-rate apartments, during a community meeting last week.

They also shared updated renderings of the project, which are still subject to change as developers consider the needs of the neighborhood, they said.

The library would be twice as large and both a draw for the community and a boon for the people who live above it, officials said.

But during a meeting packed with grumbling neighbors, some appeared convinced the project would spell trouble for Little Italy, as low-income tenants return to the area. Some neighbors worry that the project could cause crime to increase in the area and property values to plummet.

One person at the meeting asked how many people were opposed to the "monstrous" building, while others cheered at the proposition of selling off the land to private developers or asked about a name change for the library.

The planned building at 1350 W. Taylor St. is part of a massive redevelopment of the former ABLA public housing site, now dubbed Roosevelt Square. The entire project will erect mixed-income apartments, town houses and other residential units, along with the proposed library and the Addams Park Sports Complex, where the razed homes once stood. 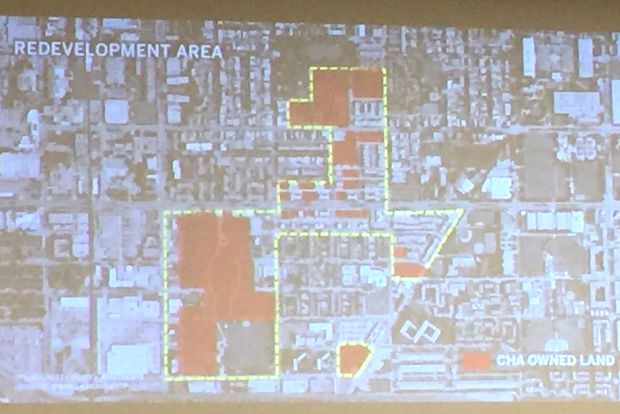 The city doesn't have enough money to build a standalone Roosevelt Library, said Sandberg, a developer with Related Midwest, the company that will also manage the property once it is complete.

"It would be impossible to build this library without it being a component of a mixed-use project," Sandberg said. "Chicago Public Library is not flush with cash, and the city is strapped, so really, we're looking at an empty bucket."

The 2015 Chinatown branch was built exclusively with $20 million in tax-increment financing, which siphons money from a district's property tax growth over a 23-year period to pay for infrastructure and other development in Chicago.

While Ald. Jason Ervin (28th) signed off on the use of two other pools of TIF money for the Roosevelt library, both accounted for about one-third of the financing needed to build it, officials said.

By adding the housing component, the project qualifies for money from federal tax credits, the U.S. Department of Housing and Urban Development and other government housing funds, Sandberg said. The money from HUD would provide half the needed funds for the project alone. 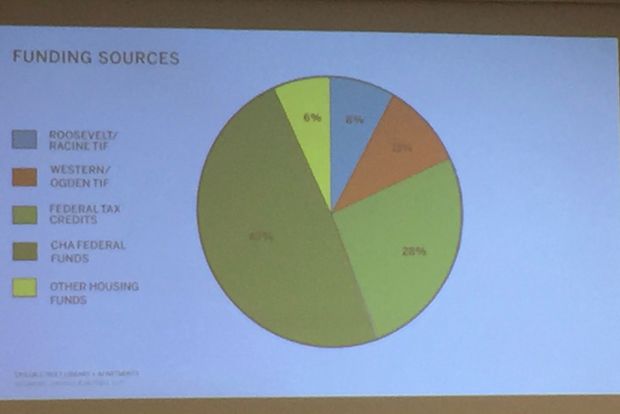 Officials did not say how much the Taylor Street site as a whole would cost, and CHA did not immediately have that number available upon request.

It also means the library pays nothing for the land, which is tangled up in 80 years of agreements between the city and federal housing department that make it very difficult to sell to private buyers, officials said.

There's also the issue of the city's court-ordered obligation to revive the public housing stock which once occupied many blocks of land both north and south of Roosevelt Road and which in part led to the creation of the CHA's 2000 Plan for Transformation.

"That [court] order cannot, in any appreciable way, be changed," O'Neill said. "Nothing can be done." He said if fewer low-income units are included in the library building, they will have to be replaced elsewhere in the project.

O'Neill, who also elaborated on the situation in a blog post, is in favor of the latest building design, and said he felt architects adequately responded to community concerns over preliminary renderings depicting a flat facade that would overshadow Taylor Street.

Architects have refined the initially "clunky" design of what began as a six-story building that project designer Brian Lee said "frankly, almost looks like a motel sitting on top of a nicely scaled library." 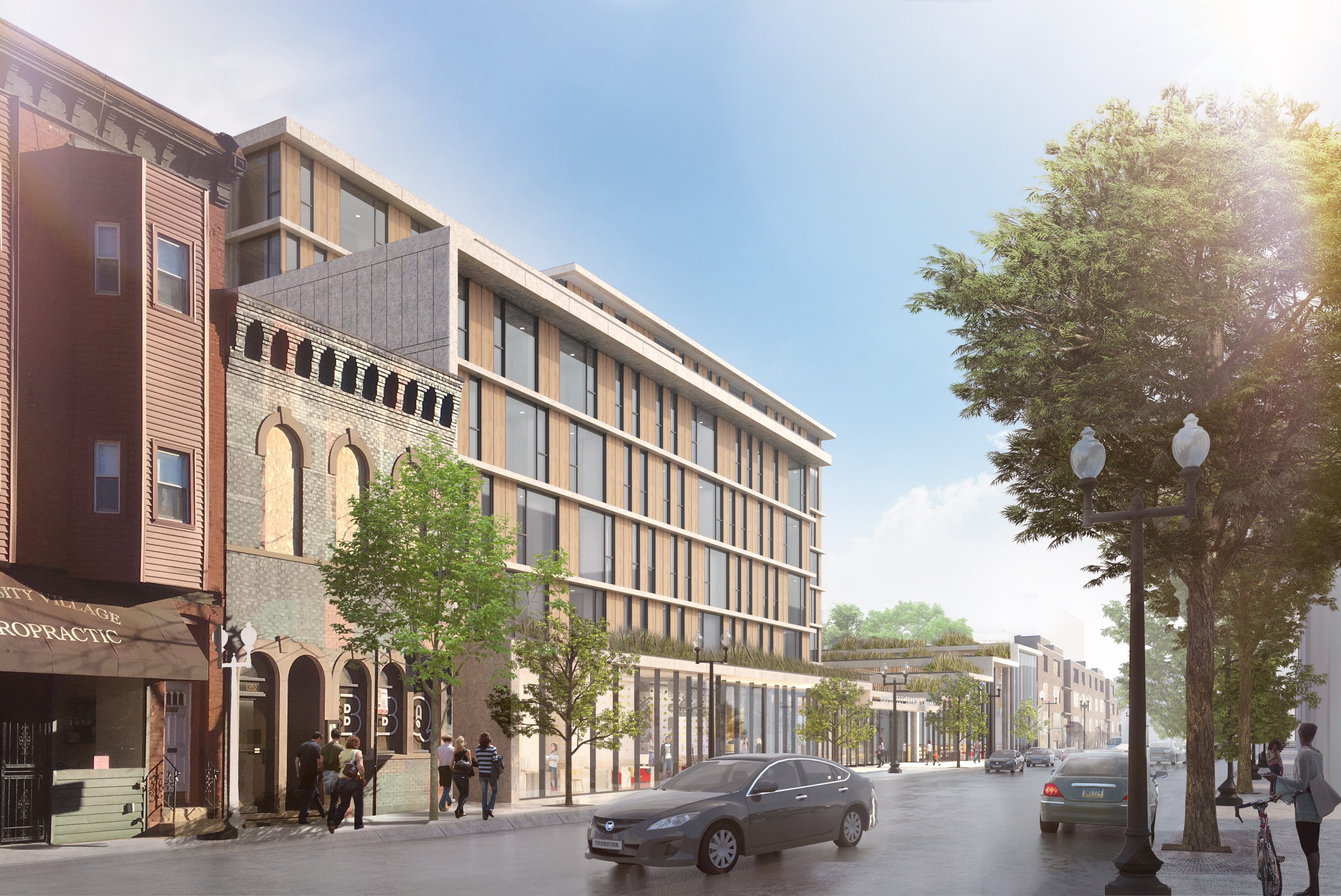 Architects wanted to avoid the flat, shadow-casting facade from earlier renderings and create a more eye-appealing mass, as seen in this updated rendering. [Provided/Connecting4Communities]

To keep from blocking sunlight and break up the flat facade, Lee and his firm set the upper levels back and raised the height to 73 feet with an additional story to compensate for the adjustment, although only five will be visible from the street, Lee said.

"It helps immeasurably to add more light, and it gives the library a strong presence," Lee said.

There will be 26 parking spaces for both the library and the housing. Nine are meant for library patron use, up from five at the existing library, said Andrea Telli, Chicago Public Library's assistant commissioner of neighborhood services.

The 73 apartments above the new Roosevelt Library will be half CHA low-income housing, 40 percent affordable housing and 10 percent market-rate apartments. 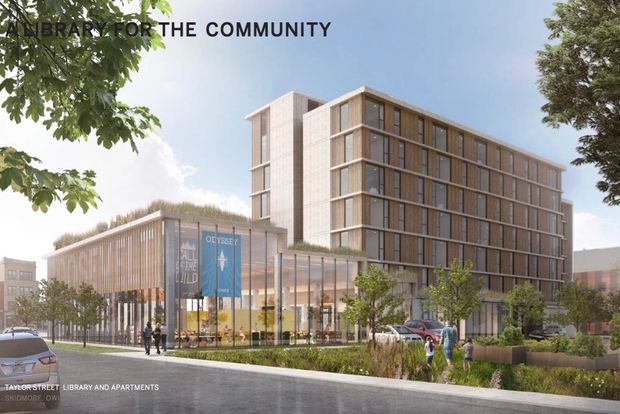 Architects wanted to avoid the flat, shadow-casting facade from earlier renderings and create a more eye-appealing mass, as seen in this updated rendering. [Provided/Connecting4Communities]

That figure is part of the overall Roosevelt Square plan to have the total 2,941 units be split one-third each into CHA housing, affordable homes and market-rate residential units, although each building on its own is not tied to that exact breakdown.

All adults living in CHA low-income housing must be working 30 hours per week or enrolled in school. Applicants undergo criminal background and credit checks, Sanchez said.

"We go through a pretty elaborate screening process to make sure we're getting good folks," Sanchez said.

To quality for an "affordable" housing unit, a person much make 60 percent or less of the area's median income if renting a home, or roughly $33,000 for a two-person household. For a working family with two incomes, that rises to around $40,000 per year.

During an at-times tense question-and-answer session, one person asked for a single example of a CHA project that coincided with a boost in the community. Tracy Sanchez of the Chicago Housing Authority managed to name two: new development where Cabrini-Green and Robert Taylor Homes once stood.

Both "had tremendous impact on the communities, with a number of success stories," Sanchez said. "Cabrini-Green used to be Skid Row, and today you have a thriving community and very tall, dense buildings."

Since the meeting, several residents have posted concerns on the Next Door website that the plans could result in an increase in crime in the neighborhood and hurt property values. Others started a petition asking for a delay in approving the plans for the building.

The Roosevelt Library will be one of three co-located libraries placed inside CHA mixed-income housing developments that Mayor Rahm Emanuel announced in October 2016.

Along with senior housing in West Ridge and a new Independence Library anchoring a mixed-income development in Irving Park, the three CHA buildings will be among the first in the nation to co-locate public housing with other municipal facilities.

"Libraries play a vital role in making knowledge and learning accessible, as well as offer a common space where the community comes together," said library Commissioner Brian Bannon. "Partnering with CHA is an innovative approach that better positions both of us to build a stronger foundation for our communities."

In the fall, Related Midwest will break ground on 50 market-rate, family-sized town houses on West Grenshaw Street between South Loomis and South Lytle as part of the Roosevelt Square redevelopment, which was first announced in 2000 and later updated in January 2016. 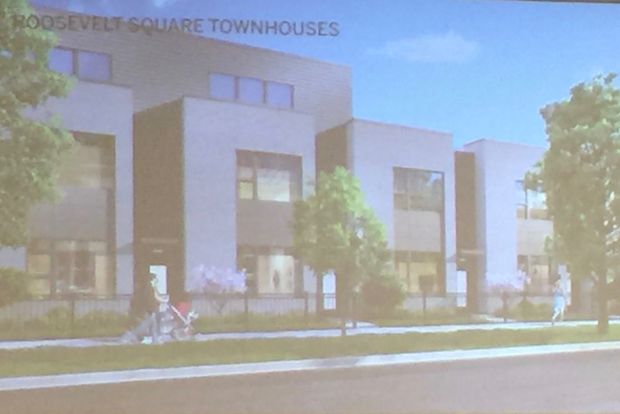 Work will begin this fall on Roosevelt Square town houses, which will all be leased at market rate. [Skidmore, Owings & Merrill]

The new town homes will be the first market-rate units developed in Roosevelt Square since 2005-2006, when the housing market crashed.

RELATED: 50 New Homes Will Restart Huge Project On Near West Side

As for the library, it will be twice as large as the current Roosevelt Library, which is 7,000 square feet and housed inside a former bank building, Telli said.

Telli's mother and grandmother grew up on Taylor Street, which she said added a sentimental element to her work on the new Roosevelt Library.

The proposed library would have community and study rooms, a children's area, a media center for teenagers and a brand-new $300,000 collection on its opening day, Telli said. 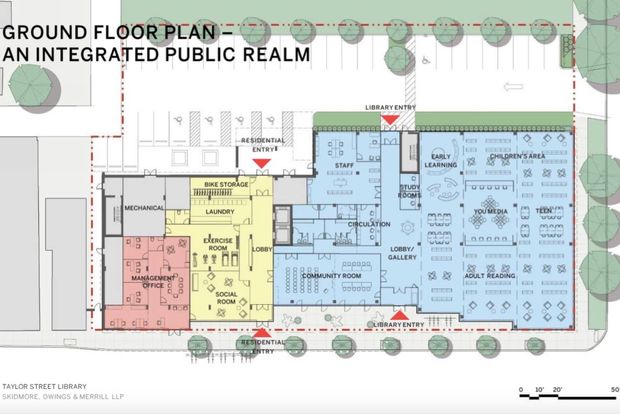 The proposed layout for the library. [Provided/Connecting4Communities]

Reading nooks are tucked away all around the new library, "where people can be surrounded and enveloped by books," she said.

The teen area in particular is meant to become somewhat of a second home for teenagers, who will be able to play video games or test out 3D printers and vinyl cutters before getting to homework or some light reading. 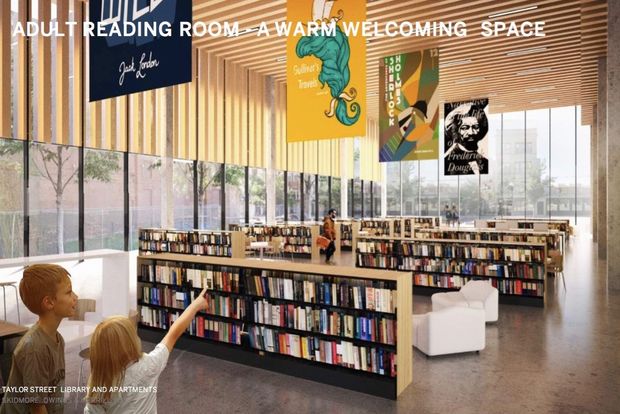 Preliminary concept designs for the new Roosevelt Library, which will continue to adapt with community input, officials said. [Provided/Connecting4Communities]

Telli drew comparisons to the Chinatown branch, which opened in 2015 and was named one of the most beautiful libraries in the world. Like in Chinatown, the Roosevelt Library will have art and design elements to reflect its location in Little Italy.

After the Community Development Commission approved the land use Tuesday, officials hope to see the proposal move through City Council by late fall, they said.