Twitter Facebook Email More
Ald. Roberto Maldonado (26th) made about $300,000 in profit off a real estate deal next to The 606. Now he wants to make it harder for others to follow his lead.
View Full Caption
File Photo; DNAinfo/Mina Bloom

Now Maldonado — along with other Northwest Side aldermen — want to make it tougher for other property owners to follow his lead.

A new measure that could be introduced to the City Council as soon as this month would make it more expensive to build new homes along the trail in an effort to put the brakes on a booming real estate market that some say is fueling gentrification in predominately Latino neighborhoods. 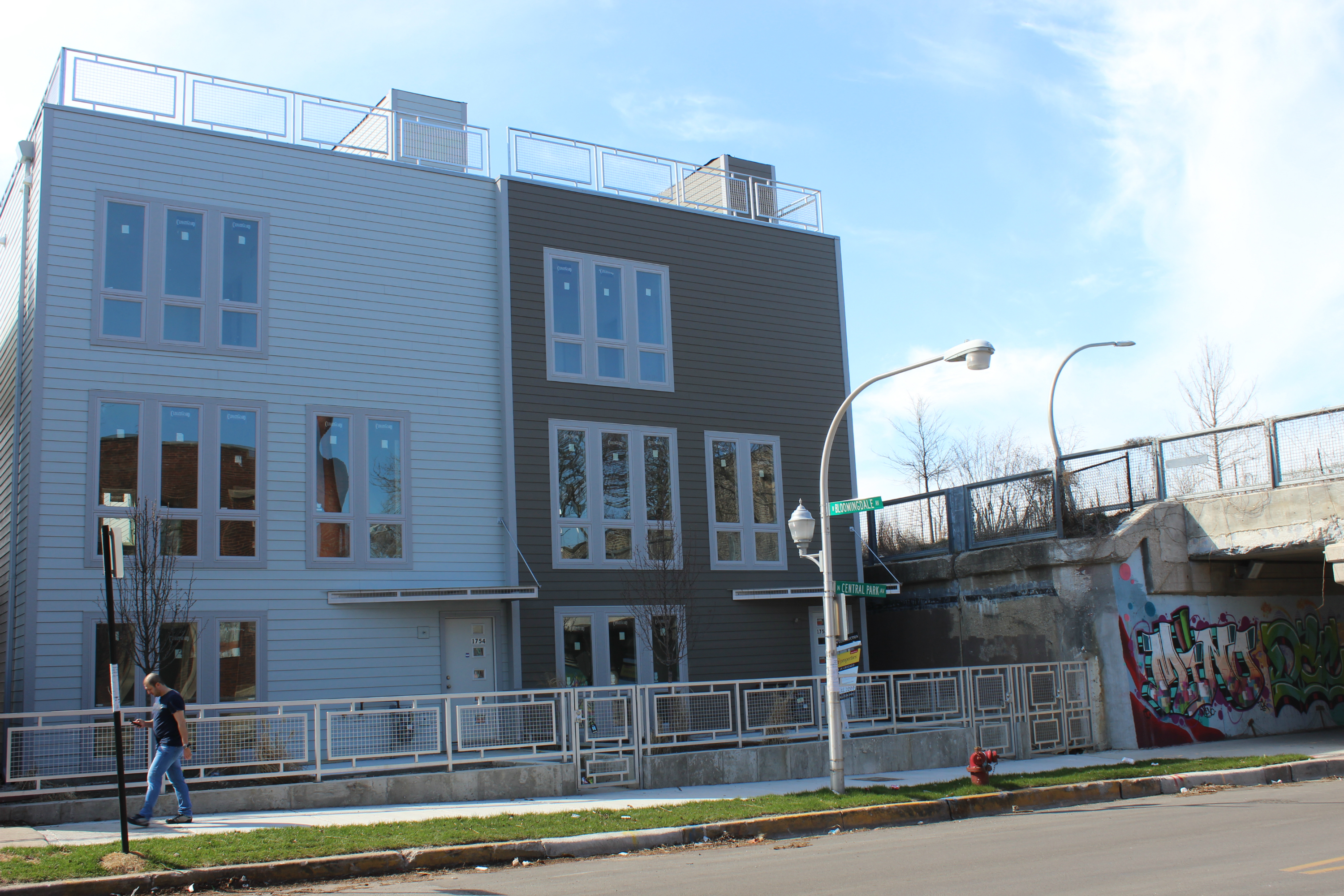 The townhomes at 1754 N. Central Park are situated right next to The 606. [DNAinfo/Mina Bloom]

If the measure is passed by City Council, demolition fees for residential properties along the western part of the 606 would increase and a "deconversion fee" would be charged in an effort to make tearing down multi-unit buildings to build single-family homes in their place more expensive.

An examination by DNAinfo of the ordinance as currently written shows that developers seeking a zoning change would also be required to increase the percentage of affordable housing, adding additional costs to those projects.

Maldonado has touted the law as a tool to "slow down the pace of gentrification" and preserve existing affordable housing stock.

While it is impossible to know for certain what impact the proposed law would've had on Maldonado's properties, the value of those properties was boosted by the popularity of the 606, a 2.7-mile trail that runs through Humboldt Park, Logan Square, Wicker Park and Bucktown that opened in June of 2015.

The measure would make it more difficult for current property owners to follow Maldonado's lead and cash in.

Maldonado declined to be interviewed for this story, but answered questions posed by DNAinfo via email.

"Like many growing families, my late wife and I sold some of our assets to raise our family. In this case vacant land along the 606, a transaction that occurred in the months prior to my last Aldermanic election with complete transparency."

Maldonado, who owned a Humboldt Park mortgage company for 25 years before joining the City Council, said when he bought the properties in question, "Chicagoans did not think Humboldt Park was a desirable place to live and it was hard to find anyone interested in investing in this community."

RELATED: Gentrification Along The 606 Could Be Curbed Under New Law, Aldermen Say

"Not only did I help Latino families from the neighborhood finance their first home to raise their family, I also invested in real estate in the community including the purchase of vacant lots," Maldonado wrote.

"No one ever dreamed that Humboldt Park would someday become one of the hottest real estate areas in the city and that the 606 trail would run through the heart of it. I am proud that I invested in this community and it has not only survived but also become a place that new, young families want to call home," he said.

But Maldonado said his objective was different as a member of the City Council.

"My goal as an elected official has been, and always will be, to keep homes affordable for the generations of families that have lived through the worst of times and the best of times in Humboldt Park," Maldonado wrote. "They are the lifeblood of this community and their presence continues to make it strong."

Former City Council Inspector General Faisal Khan, who now heads up the watchdog group Project Six, said Maldonado's profit from flipping real estate along the 606 means he should not vote on this proposed ordinance — much less help craft it.

"He is setting himself up for questions about whether he has an ulterior motive," Khan said. "It would be prudent for him to recuse himself from this vote."

Maldonado did not answer a question about whether he would follow Khan's recommendation.

Maldonado once owned four parcels at 1754-56 N. Central Park Ave. and 1755-57 N. Monticello Ave. adjacent to what is now the 606, which draws runners, bicyclists and walkers throughout the day.

Maldonado bought three of the four properties — then vacant lots — in the 1990s for a total of $50,000. [DNAinfo/Darryl Holliday]

The trail runs along a former railroad track first built in 1873 by the Chicago and Pacific Railroad Co. The trail was raised approximately twenty feet in the 1910s as part of an effort to stop fatal crashes.

The once-heavily trafficked tracks fell out of use, with the last freight train rumbling down in 2001.

City officials first investigated converting the Bloomingdale Line into a greenway in 1997, and included it in the Logan Square Open Space Plan that covered 2002-04.

However, the city did not purchase the former tracks until January of 2013, and the trail opened in June of 2015.

Maldonado's plan was to flip the properties for a profit.

"Originally I purchased them to sell them, but when I was ready to sell them the market plummeted and I couldn't sell them," he told the Reader in 2009, the year he was appointed to the City Council by former Mayor Richard M. Daley. "So I was going to partner with an experienced developer to develop them."

Originally, Maldonado wanted to build a pair of four-story, 10-unit buildings on the site. But after he became alderman and the Reader spotlighted the potential conflict of interest, Maldonado yanked his application saying he would instead sell the properties and recuse himself from any future proceedings.

In 2014, developer Denmax Corp. — which has donated to both Maldonado's and Moreno's political campaigns — filed an application with the city to change the zoning designation on the properties from manufacturing to residential.

"The settlor of the trust, Nancy Y. Franco-Maldonado, is my wife. I am a guarantor for the loan which encumbers the property,” Maldonado wrote to the executive director of the Chicago Ethics Board Oct. 7. The alderman also disclosed his relationship in the site's zoning application.

It wasn't until 2015 — when the 606's Bloomingdale Trail was under construction — that Maldonado officially sold the properties to the developer for $500,000, approximately $300,000 more than he paid for them, according to city records.

The developer then built eight modern townhomes, which are now up for sale for $499,000 each.

Dick Simpson, a former alderman and current political science professor at the University of Illinois at Chicago, said it's "ironic" Maldonado did the very thing he wants to make it harder for others to do.

"Maldonado has a long history of benefiting from gentrification, and now he's leading the charge against gentrification," Mixon said. "The way it looks is terrible."

A first in Chicago

Since construction started on the elevated trail, home prices along the western portion — in Logan Square and Humboldt Park — have skyrocketed, according to a study conducted by the Institute for Housing Studies at DePaul University.

According to the study, home prices went up 48.2 percent since the trail broke ground and residents are paying a 22.3 percent premium for properties within one-fifth of a mile of the trail, which the Institute for Housing Studies said translates into more than $100,000 of the area's average 2015 sales price. The data doesn't include rental housing stock or for-sale condos.

It remains to be seen how the law will impact home prices along the elevated trail.

That's especially true, given the fact that the law is likely the first of its kind in Chicago.

Khan said Maldonado's history might be a distraction from the important topic of gentrification — "These are critical questions for the city to answer."

However, he added, "We see examples over and over again of behavior by aldermen distracting from the real issues."