City's New LED Streetlights Get Thumbs Down From Student Advocates

NORTH PARK — The City of Chicago is soliciting feedback on its new LED streetlights, being tested in seven neighborhoods, and a group of Amundsen High School students aren't holding back on their opinions.

Terrible, they pronounced, after checking out the pilot lights in place on Jersey Avenue, between Bryn Mawr and Hollywood.

The teens have spent the last year studying light pollution, taking their "Starry Chicago" presentation to the Aspen Ideas Festival. They met last spring with members of the Chicago Infrastructure Trust, which is overseeing the Smart Lighting Project, to argue against the LEDs.

While LEDs are cheaper, longer-lasting and easier to swap out than the existing high-pressure sodium lamps, they emit bright white/blue-rich spectrum lighting that's painful to the eyes, the students said.

"Their 'Starry Chicago' work made a strong impression on the entire CIT board and staff. We were all incredibly impressed by the passion and thoughtfulness of their presentation," Leslie Darling, executive director of the Chicago Infrastructure Trust, told DNAinfo via email.

"I can assure you that we took their comments into account as we designed the Chicago Smart Lighting Project," she said.

"I agree they listened to us a little bit," said Amy Exposito. "It did look like they tried to angle the light down."

But the brightness and scattering of light is the same, if not worse, said Shannon Suty.

"They're excessively intense," she said of the LEDs.

Exposito agreed: "They need to turn it down. It's terrible for driving."

The students pushed for shields to be installed around the lamps to direct light where needed — streets and sidewalks — a practice New York has enacted into law.

Without the shields, "they've kept the area of light the same and increased the amount of glare," said Dylan Merino.

"It looks like an oncoming car shining their brights at you. It's pretty ridiculous," he said. "Even when I wasn't directly looking at the light, it was still bothersome."

The students said they will keep advocating for shields and other improvements, but time is running short.

The city is collecting comments through the end of 2016 before making its final procurement decision, which will affect more than 270,000 lights, according to the Chicago Department of Transportation.

Residents can submit feedback online at www.chicagodot.org or www.chicagoinfrastructure.org, or by mail to CDOT Streetlight Demo, 30 N. LaSalle St., Suite 1100, 60602. 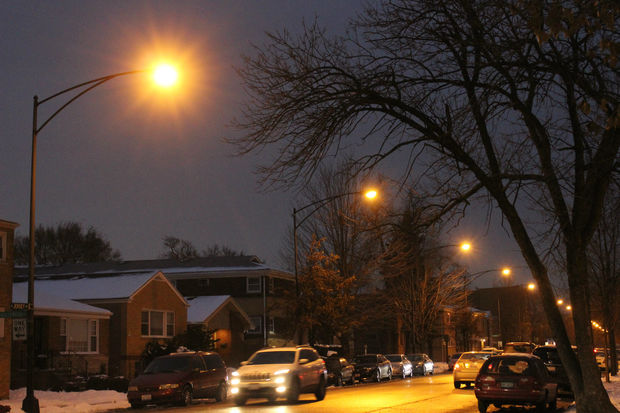 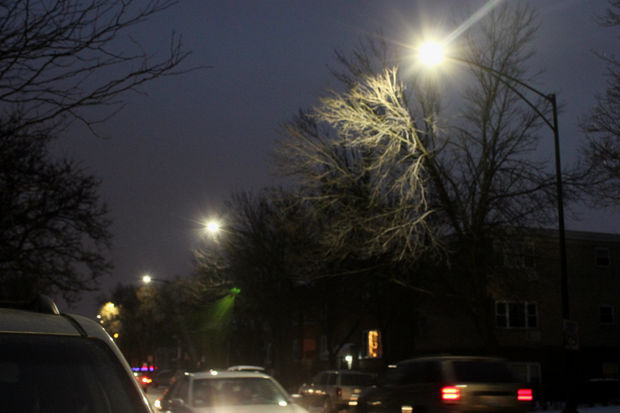 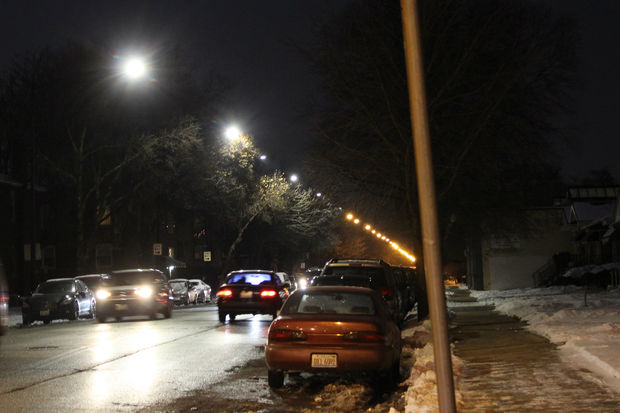 Old and new lights in a row, on Jersey Avenue in North Park, looking north from Bryn Mawr.