DOWNTOWN — The Lakefront Trail eventually will be a lot less congested thanks to a $12 million gift to the Chicago Park District from Illinois' richest man and the biggest contributor to Mayor Rahm Emanuel's most recent political campaign.

In March, Emanuel announced plans to add nearly 6 acres of green space where Lake Michigan used to be at Fullerton Avenue, as well as separate paths for runners and bicyclists along 7 miles between Fullerton and Ohio Street and from 31st Street to 51st Street.

The $12 million gift from Ken Griffin — who gave Emanuel more than $1 million in the 2015 runoff against Cook County Board Commissioner Jesus "Chuy" Garcia — will allow the Park District to separate the remaining 11 miles of the trail, which is flooded with runners and bicyclists during warm — or less-than-frigid — weather.

"The lakefront is our crown jewel," Griffin said at a press conference Wednesday. "On a beautiful day, the Lakefront trail should be a place where cyclists, runners and walkers can enjoy without having to navigate around one another."

The path for bicyclists — closest to Lake Shore Drive — and the path for pedestrians are expected to be complete in 2018, officials said.

The asphalt bike trail will be 12 feet wide, while the pedestrian trail will be 20 feet wide with 14 feet of asphalt and 6 feet of soft surface mix on either side, officials said. 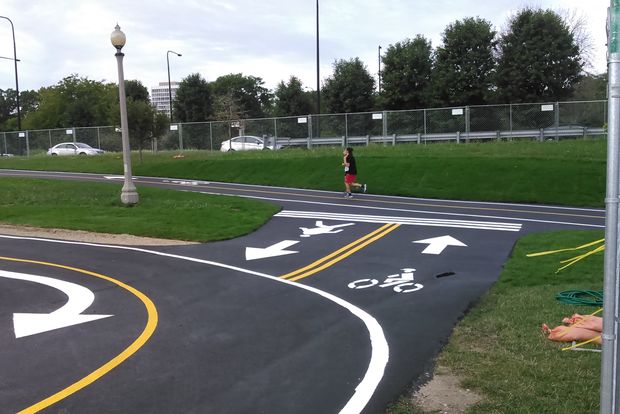 Separate paths for bicyclists and runners on the Lakefront trail — which draws more than 100,000 people daily on summer Saturdays and Sundays — has been among the top priorities for the Active Transportation Alliance for years, officials said.

"I often hear from people who avoid the lakefront because it's too crowded, and this will dramatically address that problem and enable more people to comfortably bike and hike along Chicago's beautiful lakefront," said Ron Burke, executive director of the alliance.

The trail is the busiest trail in the United States, Parks Supt. Mike Kelly said. With so many daily users, it can also become dangerous as they jockey for space on the path.

"You have people moving at very different speeds," Burke said. "That's a recipe for crashes. [With the separate trails,] you'll create much more order."

Active Transportation Alliance employee Megan Williams, who was hit by a speeding biker on the trail while training for a marathon, said separate trails would make a huge difference.

"Before I knew it, everything went black," said Williams, who was knocked unconscious and brought to the emergency room. "To this day I can't tell you what happened."

Emanuel, at a press conference announcing the expansion Wednesday, said Williams' experience was one reason the trail separation was needed.

"Our lakefront is our jewel," Emanuel said at Ellis Park, 3520 S. Cottage Grove Ave. "Trail separation does more than address issues of overcrowding; it builds a better future for one of the city's greatest assets by ensuring more people are able to experience what the lakefront has to offer."

Emanuel has made improving Chicago's parks and open spaces one of his highest priorities through what his administration calls the "Building on Burnham" plan named for Daniel Burnham, the legendary "make no little plans" city designer credited with greening the dirty industrial Chicago of the early 20th century.

The effort to separate the Lakefront Trail has been endorsed by Friends of the Parks.

Griffin, who made his fortune running the Citadel investment firm, gave $13 million to Gov. Bruce Rauner, who has been at loggerheads with the mayor over funding for Chicago Public Schools.