CHICAGO — The pressure of Division I football contests at Michigan State is nothing compared to what Raequan Williams dealt with during West Side pickup games as a kid.

"We're playing in the streets or a parking lot, and guys would just come through the neighborhood shooting," the 19-year-old Garfield Park native said. "We would all have to run to my house. Stuff like that happened all the time."

Williams, the former star at DePaul College Prep who's now an emerging standout defensive lineman for the Spartans, said he's one of the few lucky teenagers to make it out of his neighborhood. Sports, school and his family — by blood and a teacher-turned-second-mom — have saved him, he said.

Justin Breen talks about a special bond between teacher and student.

His third-grade teacher, MacKenzie Hyde, noticed something special in Williams, far more than that he towered over his classmates. He said she "saw the good in me." 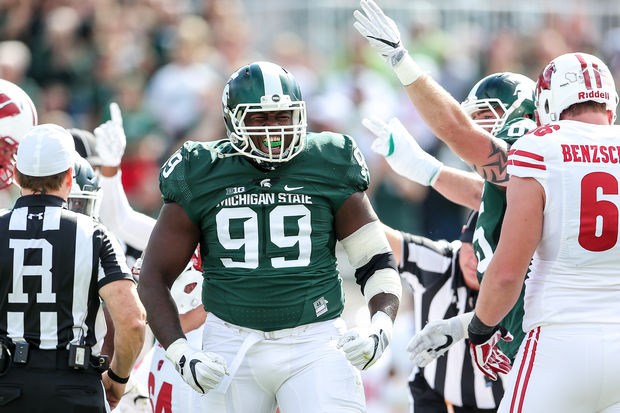 So even after Hyde — who was teaching at Lawndale Elementary as part of the Teach For America Chicago program, but left to begin law school at Loyola University Chicago — departed teaching, she stayed in touch with Williams. Every year, they would spend time together, always on his birthday; she took him to a Packers game or two in Green Bay, even though he wanted to wear Bears jerseys. She also helped him write the eighth-grade graduation speech.

When it came time to choose high schools, Williams selected DePaul College Prep, which offered him a partial academic scholarship and financial aid. And he split his four high school years living with Hyde in Uptown and his family — which includes his mother, Latasha, and three younger brothers and a younger sister — on the West Side.

"His mother and I came to a consensus that logistically it made the most sense," said Hyde, now a senior attorney at the Clark Hill law firm Downtown. "And we all became sort of an unconventional family over the years. It's been a wild ride."

Said Latasha Williams: MacKenzie "never left our side. She was a big help to me and my other kids. I love her for that because she didn't have to. I'm blessed to have her in our lives."

Throughout high school, Williams would not go out with friends, instead either working out, studying or simply staying at home, Hyde said.

"He was willing to sacrifice fun in the moment for the bigger things to come," she said. "It was a delayed gratification to a degree that most teenagers aren't able to do."

That gratification came on the football field, where Williams was a dominant lineman at DePaul College Prep, and on the basketball court, where he was a three-year captain.

"The most impressive thing about him is he realized he had a ticket to college through athletics, even as a freshman," DePaul College Prep athletic director Paul Chabura said. "And with his size [6-foot-5 and 305 pounds], he could have been the biggest bully in school, but he was everybody's best friend."

At Michigan State, which travels to Indiana on Saturday night, the redshirt freshman has made several key plays this year, including a huge fourth-quarter sack in a win at Notre Dame.

He has been fueled by a desire to help his family leave Chicago once he graduates and to honor his cousin and best friend, Antonio Pollards. The 18-year-old, who was a month older than Williams, was fatally shot in January. Williams left campus to attend the funeral for Pollards, whom Hyde described as "tremendously supportive of Raequan, and the two were always together."

"It was one of those once-in-a-lifetime relationships," Hyde said. "Raequan knows that his neighborhood isn't safe and he doesn't want his siblings to grow up in that kind of environment."

Latasha Williams said her son has loved football since he was 3 years old, and he'll undoubtedly be in the NFL one day. Raequan said he's focused on the here and now, happy to be in a safe place where he can be excel in the classroom and gridiron.

And, he said, he plans to extend the helping hand to the next generation, like Hyde has done for him.

"I want to help others like she helped me and my mom," he said. "I appreciate her very much, for people like her to be in this world."