UPDATE: The woman killed while riding her bike in North Center Monday has been identified as 23-year-old Anastasia Kondrasheva.

NORTH CENTER — A woman riding her bike Monday morning was killed in a collision with a flatbed truck on Damen Avenue near Addison Street, police said.

The woman, believed to be in her early 20s, was riding a bike north on Damen Avenue south of Addison Street about 7:50 a.m. Monday, according to Officer Bari Lemmon, a Chicago police spokeswoman.

The driver of a small flatbed truck was also driving northbound on Damen Avenue when he turned right onto Addison and struck the woman, Lemmon said.

Authorities have not yet confirmed her identity but a man who identified himself as her boyfriend told DNAinfo that he started to worry after her job called him and said she hadn't showed up Monday morning. That's when he saw news reports of an accident involving a bicyclist.

"I saw the picture and it was her bike," the boyfriend said. "This was the route she always took."

The victim worked at an Edgewater health facility where her fellow employees were distraught over her death. Her co-workers saw a photo of the bicycle on DNAinfo and knew the rider must have been their fellow employee, who worked as a health coach.

They knew their co-worker was the victim, one employee said, because "she never calls in sick."

The boyfriend said he was with the woman's family and "we can't believe it...it's just shocking."

The young woman died at the scene, police said. Her body remained there for hours after the accident Monday morning as the major accidents unit for the Police Department investigated the collision. Her bike lay beside her, mangled with a few pieces broken off. 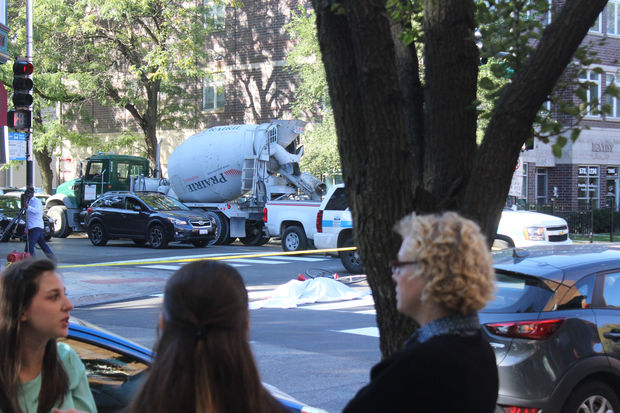 About 10 people waiting for the No. 152 Addison bus saw the accident, they said. [DNAinfo/Joe Ward]

Witnesses on the scene said the bicyclist was riding between the truck and the curb when the truck attempted to turn onto Addison.

Carole Cifone said she heard the accident and went out to see what happened, and she saw the truck driver had became "so distraught he was taken away in an ambulance."

Her husband, John Cifone, said witnesses told him the truck driver likely didn't see the bicyclist as he attempted to turn onto Addison. As someone who rides a motorized scooter, he said "Sometimes you got to have eyes in the back of your head." 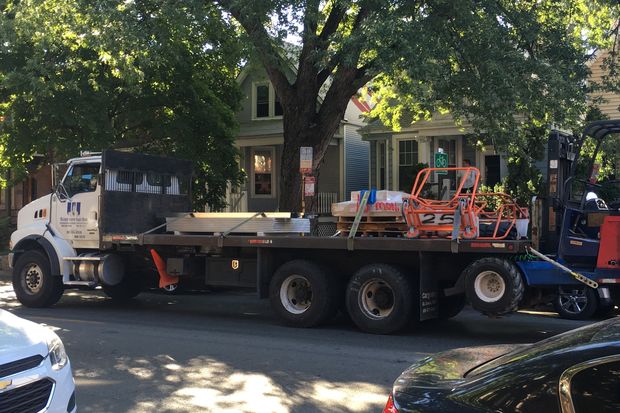 The driver of this flatbed fatally struck a bicyclist Monday in North Center. [DNAinfo/ Joe Ward]

The tragedy happened in front of about 10 people waiting for the No. 152 bus. They stayed on the scene to tell investigators what they saw. A CTA official was on the scene to help commuters and reroute the Addison Street bus, and about half a dozen bicyclists riding down Damen stopped to inspect the scene.

Damen and Addison is a busy intersection for cars and bikes. Across the street from where the accident happened, a sign warns "Shared Lane Yield To Bikes." It faces southbound traffic on Damen. 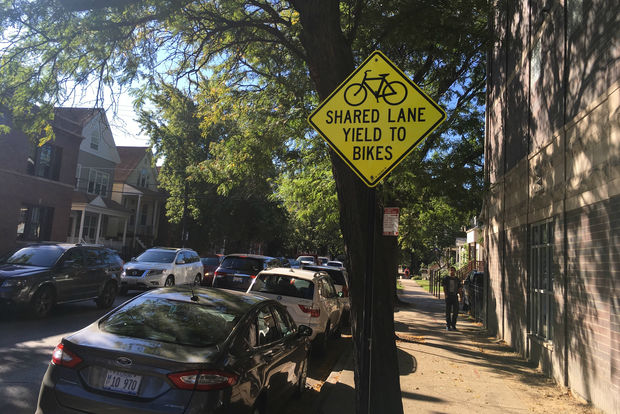 This sign is across the street from where Monday morning's tragedy happened. (DNAinfo/Joe Ward)

The incident is the latest in a series of bicycle fatalities this summer resulting from collisions between cyclists and cars or trucks.

Earlier this month, a 20-year-old man riding a bicycle along Irving Park Road near Marmora Avenue was critically injured when he was hit by an SUV.

Last month, Francisco Cruz, 58, was killed by a car while biking in the 4000 block of West Maypole Avenue.

On August 16, 20-year-old Lisa Kuivinen was struck and killed by a truck on Milwaukee Avenue.

The nation's first bike-share fatality happened in Chicago on July 1, when 25-year-old Virginia Murray was hit by a flatbed truck while riding a Divvy bike at Belmont and Sacramento avenues.

On June 15, Logan Square man Blaine Klingenberg died after being hit by a double-decker bus while biking on Michigan Avenue.

"If you put trucks on arterials like Damen, you need to be very careful," said Resman.

Resman was wearing a "don't hit me" sign on her back with balloons taped to it.

"I shouldn't have to ride like this," she said.

Last week, Chicago surpassed New York City and was named the "Best Bike City" in America by Bicycling magazine, which credited the city's continually expanding Divvy bike network, new public paths like the 606 Bloomingdale Trail and the ongoing rollout of protected bike lanes for earning it the top spot.