LINCOLN SQUARE — When it comes to sustainability, Studio Gang, the architecture firm founded by MacArthur Fellow Jeanne Gang, practices what it preaches, sometimes with unexpected results.

When the firm moved into new digs in Noble Square, occupying a landmarked building that once housed the Polish National Alliance, renovation plans called for a rooftop garden.

What Studio Gang wound up with was an accidental farm.

The original garden design specified a wildflower meadow, teeming with natives like black-eyed susan, milkweed, butterfly weed and other plants that attract and nourish pollinators, according to Schuyler Smith, Studio Gang shop co-leader.

"We knew it would be a mixed bag for establishment, so we threw down this annual that would get us through the winter," Meyer said.

That afterthought annual was a hardy winter wheat, a fast grower capable of putting down roots and holding Omni's proprietary soil substitute in place until spring.

"As it turned out, the wheat did really well," Meyer said.

"We were a little bit surprised at how beautiful it was and how abundant it was," Smith said.

Rather than let the accidental wheat crop go to waste, Omni turned to its sister company, The Roof Crop, to harvest the grain.

"We were all, 'Let's see what happens,' " said Tracy Boychuk, Meyer's business partner in The Roof Crop, which leases and maintains Omni systems as a "tenant farmer."

"Most people will be shocked they can hold a bag of flour that grew on a roof," she said.

Students participating in an after-school program harvested the wheat, one stalk at a time, using scissors in order to avoid harming the neighboring prairie plants, Meyer said.

The manual process — a far cry from the combines used by farmers — also involved releasing the wheat berries from the wheat heads, and removing chaff and other debris through a step called "winnowing."

"I thought they were nuts at first," said Dave Miller, co-owner of Baker Miller.

"Just because you grow the wheat doesn't mean you can eat it," he said.

Wheat needs to be tested for vomitoxin (literally a toxin that causes people to vomit) among other things before earning a "food grade" designation, Miller explained.

"I was thinking we were going to have 'feed' grade," which is appropriate for animals but not people, he said. "This was as good as anything I've gotten from a farmer."

In fact, Miller wound up with pastry flour, high enough quality to bake into a batch of cookies he served at The Roof Crop's open house last week.

Though the 60 pounds of flour produced by Studio Gang's 1,000-square-foot rooftop plot would barely last Baker Miller through a single day of bread making, the partnership with The Roof Crop and Studio Gang got Miller's wheels turning.

"It was something I had never thought of," Miller said of growing rooftop wheat. "There's something intriguing going on here."

The cost isn't sustainable but "it could be," Miller said, especially if the wheat were grown purposely and harvesting could be mechanized or less labor-intensive.

"It's using unused space. There's a lot of benefit to it," he said.

The bonus wheat crop provided Studio Gang with food for thought, as well.

"There's definitely a lot to look at in terms of rooftop gardens in an urban landscape," said Lydia Meyer, Studio Gang shop coordinator.

"There hasn't been a lot of research in the U.S.," Meyer said. "In some ways, this was a science experiment" regarding how much biodiversity an urban rooftop can support.

Though the wheat was intended as a one-off placeholder while the meadow grew in, Smith said, "There's a very good chance we'd do it again."

Most of the rooftop systems Omni installs are of the non-edible variety but the garden Omni and The Roof Crop have planted atop their own building is full of fruits and vegetables — including fruit trees.

The garden is productive enough for The Roof Crop to have a stand at the South Loop Farmers Market and also to sell directly to chefs.

"Our head of [research and development] would say there's nothing we can't grow on a roof," said Molly Meyer.

As mindsets change and building stock turns over, Meyer said that 30 years from now, "I see no reason a large percentage of Chicago [roofs] couldn't be green. ... We could feed the city." 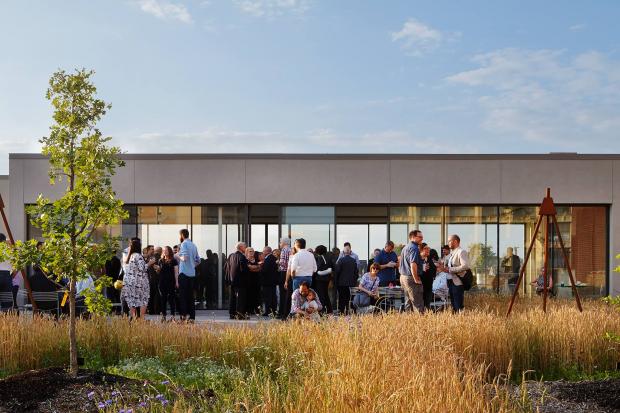 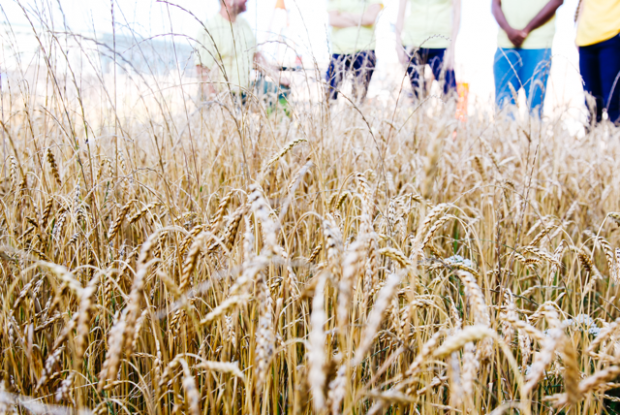 Amber waves of grain — on a rooftop. [Hannah Hoggatt Photography] 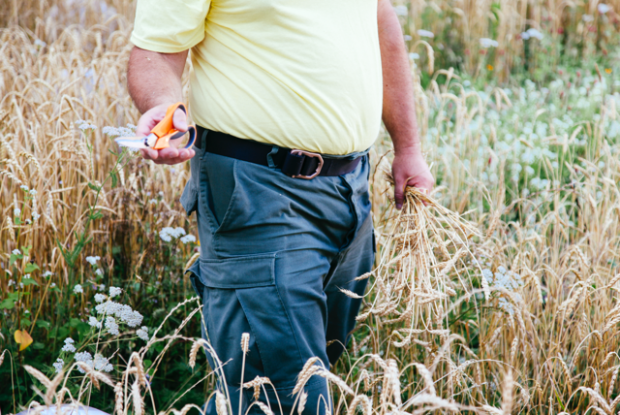 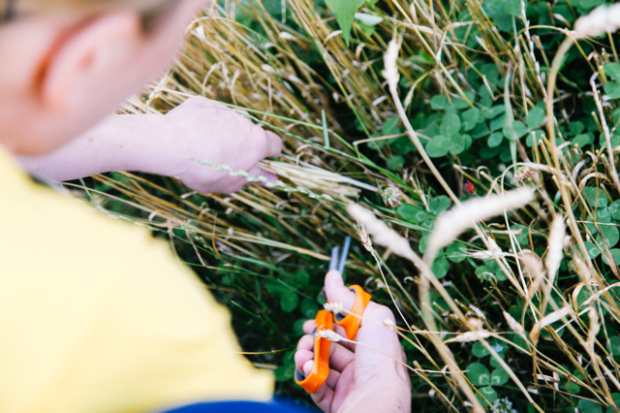 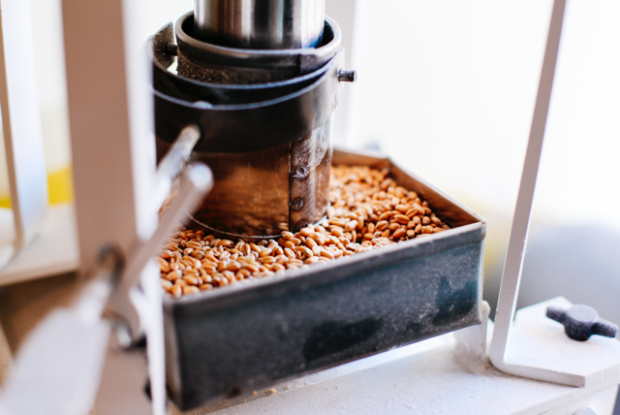 Wheat berries about to be milled into flour. [Hannah Hoggatt Photography] 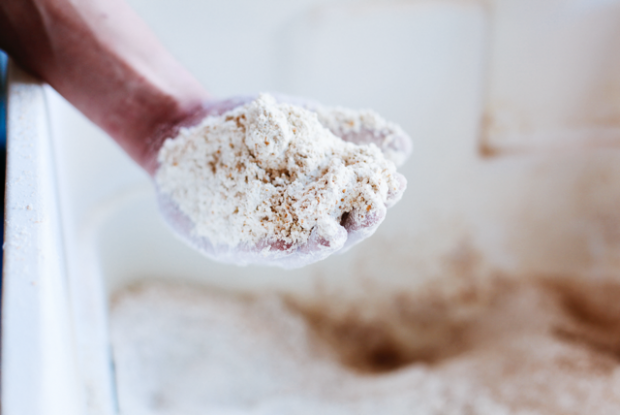 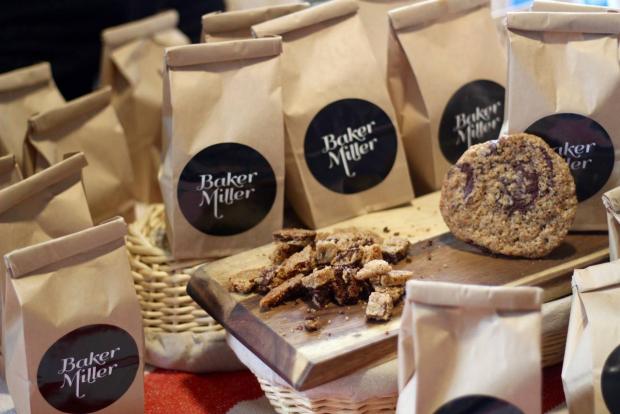 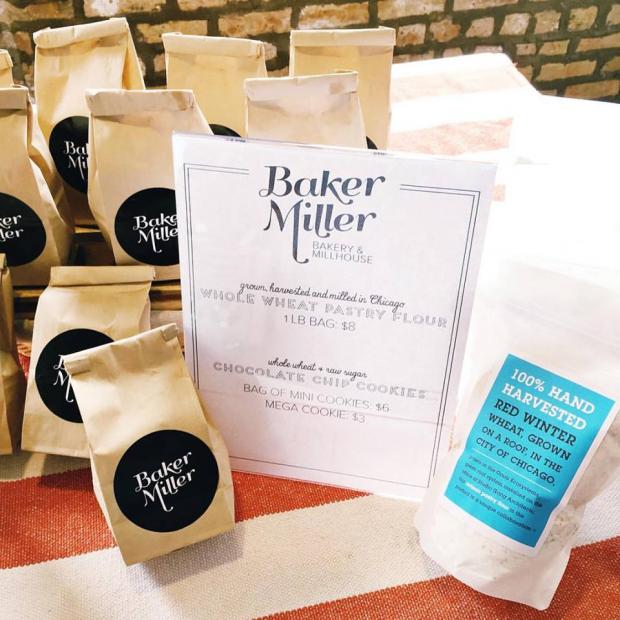 Baker Miller sold its rooftop-grown flour at an open hosted by The Roof Crop. [Facebook/Baker Miller]