NEAR WEST SIDE — The escalating tensions at Donald Trump's presidential rally exploded in Chicago Friday night, forcing the abrupt cancelation of a planned Trump speech at the UIC Pavilion as thousands of people waited.

The controversial Republican presidential candidate never took the stage before his campaign called off the rally. Shoving and shouting matches broke out inside and outside of the University of Illinois at Chicago's arena as Trump supporters and protesters squared off, though only a few injuries were reported.

"For the safety of everyone gathered in and around the pavilion, the Trump rally will be postponed," an official said from the stage shortly after 6:30 p.m.

"Total chaos" was how one observer called the scene before Chicago Police officers swept into the arena and cleared it out. One protester climbed onto the stage and was wrestled away. One reporter — M. Scott Mahaskey, director of photography at Politico — who has been following the Trump campaign said the Chicago event was "absolutely" the worst he's seen in terms of escalation.

A source said at least two people were arrested inside. Several people involved in fights could be seen being escorted out.

Protesters inside danced and cheered after the cancelation announcement was made — and then two or three fights between members of both sides broke out. One protester could be seen swinging his fist at a Trump supporter, but didn't appear to connect. Trump supporters, angry about not seeing the man himself, jeered and pushed at protesters.

Trump spoke with CNN's Don Lemon 90 minutes after the cancelation.

"I got to Chicago tonight a couple of hours ago," Trump told CNN at 8 p.m. CDT. "And we had 25,000 people for tonight. We were going to have a lot inside and outside. A tremendous gathering of real supporters. At the same time, we had some protesters outside, which was probably 2 or 3,000."

UIC Pavilion seats about 10,000 people. Observers inside said the stadium was about 80 percent full, with about one-quarter to one-third of attendees being protesters.

"And we made a decision, even though our freedom of speech was violated totally. We made a decision not to go forward. I don't want to see anyone get hurt. You would have had some people possibly getting hurt or beyond. So I made the decision, in conjunction with law enforcement."

Even before the cancelation, supporters and protesters verbally and physically sparred. Protesters included a diverse groups in both age and ethnicity, including many UIC students of all colors, groups affiliated with BYP100 and Black Lives Matter Chicago, Latino and immigrant-rights groups, Muslim and Arab groups, supporters of various Democratic candidates and more.

The cancelation came even though it was announced that Trump was in Chicago.

Trump supporters had come in from hundreds of miles away. One Trump fan in a red "Make America Great Again” hat said, "Is it really canceled? F---, I drove three and a half hours for this."

A slew of Chicago Police officers then came inside and everyone started to clear out of the 10,000-seat stadium.

Another witness said he saw a man being arrested by a group of police officers. One officer left the group holding his head and headed toward an ambulance. The ambulance then sped off.

Earlier, thousands of protesters and supporters had faced off outside before the rally.

"Trump! Trump! Trump! Illegals are Illegal," some men chanted as they went inside the stadium at Harrison Street and Racine Avenue.

Protesters shouted back, "Thanks for visiting Chicago!" and "Why racist? ... There's no room for you guys!"

Inside, supporters held signs saying "Veterans for Trump" and shouted "Trump '16"; protesters shouted back, "Get out of my country!"

But hundreds of protesters also got inside as tickets were distributed to anyone who requested them.

As those inside waited for the rally to start, three students wearing shirts saying "Muslims United Against Trump" were escorted out of the pavilion as the crowd chanted "USA! USA!" Eight to 10 protesters were taken out before the cancelation announcement, a law enforcement source said.

As of 6:30 p.m., Trump still hadn't taken the stage. Officials had urged Trump supporters not to resort to violence even if a protester disrupted the rally.

"If you see a protester, do not harm them," someone said over the loudspeaker.

Outside, protesters filled Harrison and a parking lot across the street from the pavilion. Hundreds had marched down Harrison from a rally on another part of the University of Illinois at Chicago campus. Some carried Mexican flags. One sign read, "Deport Trump." Another: "Trump Puts Ketchup On His Hot Dog."

The lines to get inside had stretched down the block and even wrapped around the stadium at one point, but started forming as early as 3 a.m. for the 6 p.m. speech.

This isn't even half the line at the #Trump rally. pic.twitter.com/PzJMVRmYkT

There was a heavy security presence, including Chicago Police, state police, UIC police and private security.

Those in line had to pass through metal detectors to get inside, and couldn't bring in food, folding chairs or even the sticks attached to small flags they held.

Aaron M., who declined to give his full name, held a large Trump sign. He said he was a union member who lived in Austin on the West Side. He said he defied stereotypes.

"I'm a union man and I'm a minority so I'm supposed to be a whiny, bitchy liberal," he said. "But no, I love Trump. And I love Israel!"

Larry Ligas, founder of Logan Square Concerned Citizens, said he was a lifelong Democrat but he wasn't sure who he is going to vote for Tuesday.

"I'm coming here as an undecided," he said. "I want to get a better feeling for Donald Trump, see him in person. I want to know who is really supporting him. [His supporters] are hardworking people, you can definitely tell that."

Many in line said they had come from outside Chicago, including some who traveled hours by Greyhound bus, carpooled from Iowa or stayed with local friends after driving hours from downstate Illinois and elsewhere.

Travis Klinefelter was with three others from Davenport, Iowa in line at 8 a.m. Friday. About a dozen people were staked out at the Pavilion, 525 S. Racine Ave., more than 10 hours before the rally will start.

RELATED: Everything You Need To Know About Trump's Chicago Rally - For Fans & Haters

A few hundred lined up for Trump rally now, three hours out from doors opening pic.twitter.com/aCdXPfwV2F

This would mark the group's ninth Trump rally, and they have arrived to each one this early, Klinefelter said. You have to, he said, in order to meet their favorite presidential candidate.

"So far, I've shaken hands or got a picture with Trump at each one," he said. "It's like the black Friday of politics, you gotta wait in a long line."

First in line was Jeff Stinnett, who rode a greyhound bus from Kentucky at 3:30 a.m. Thursday to get to Chicago.

He said he missed his chance to see Trump in his native state, and didn't want to miss him again.

"It's kind of hard to see him," Stinnett said. "I like him. He seems like he has good ideas."

For those gathered there, the long wait was no issue as long as they get to hear the man they said will shake up American politics for the better.

"Our politicians can't get anything done," said Gloria Noles, of downstate Tuscola, Ill. "An outsider sees the views better. It's time for a change."

Noles was second in line with her friend Sherry Gavaay, of suburban Orland Park.

Gavaay said that, as a business woman, she believes Trump can loosen regulations that give businesses in China and other countries a leg up.

"These politicians, they just can't compete in that arena," Gavaay said. "He's a businessman. He'll get things done."

Some students from Aurora played the Trump board game to pass the time.

Couple kids from Aurora playing Trump the board game. "It's like Monopoly but better cause it has Trump" kid said. pic.twitter.com/ippdwRNnQH

The Trump supporters said earlier they weren't worried about the possibility of violence, which has plagued some Trump rallies.

"I think they overestimate it," Gavaay, 66, said of the protests skirmishes that have accompanied some Trump rallies. "I read online that there would be a lot of protests. They said, 'Keep your hands to yourself.'"

Protesters actually got to the Pavilion before any Trump supporters arrived. 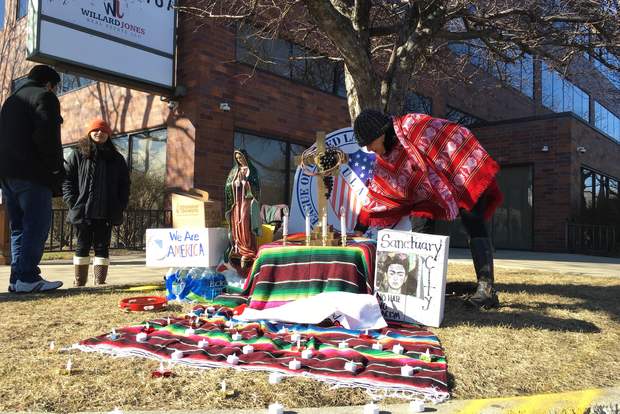 Julie Contreras of the League of United Latin American Citizens, was first on scene at the Trump rally Friday morning. [DNAinfo/Joe Ward]

A few people with the League of United Latin American Citizens set up shop on a patch of grass across from the pavilion as early as 9 p.m. Friday. Julie Contreras said they were holding a 24-hour prayer vigil to help end the racism they say Trump is fueling.

"We're armed with prayer and peace to fight any hate or racism in our streets," she said. "We do not welcome Donald Trump to our city."

Her mural showed pictures of Mexican immigrants, who under a Trump presidency would face potential deportation.

This Trump Toilet Built By Chicago Teens For Sale — Will Donald Buy It?