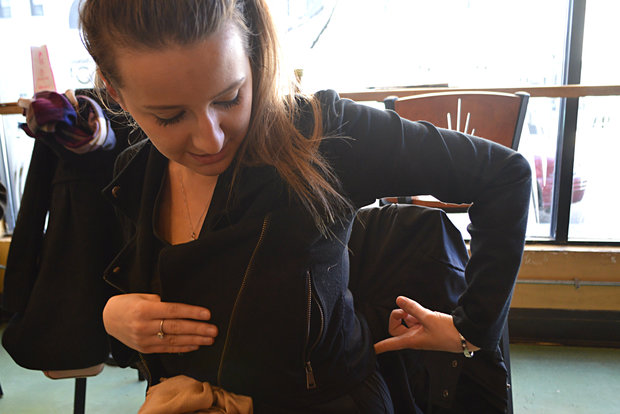 Khrystyna Trinchuk shows where she was shot on Jan. 22 in Rogers Park. (DNAinfo/Linze Rice)

ROGERS PARK — Khrystyna Trinchuk, 19, didn't think twice on the night of Jan. 22 when she and her roommate decided to make a quick trip to the corner store.

But only moments after stepping out of her apartment building around 9:15 p.m. that Friday, she was hit by bullets in her back and would later undergo an intensive, six-hour surgery that included the removal of part of her intestines.

Five weeks after the shooting in the 6700 block of North Clark Street, Trinchuk said she's ready to begin sharing her story with the hope she can somehow help other shooting victims deal with the physical, financial and emotional aftermath of their experiences.

"I don't want to be labeled as the girl who got shot, like, 'Oh, she graduated even though she got shot,' " Trinchuk said. "I don't want it to trail behind, or define the things that I do." 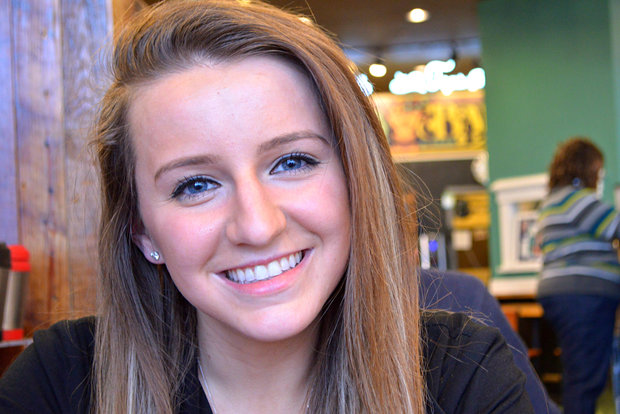 It all started on a chilly Friday night, when Trinchuk and her roommate were going to grab something from a convenience store just a few feet from their building at the corner of Clark Street and North Shore Avenue in Rogers Park.

She said within moments of stepping outside, her roommate realized she'd forgotten something and was about to run back inside when her roommate heard a popping sound in the distance.

Trinchuk said she heard only one shot before her roommate yelled out to her and tried to push her out of the way.

Not knowing what was going on, and not realizing she'd been hit, Trinchuk said she took one or two steps in an attempt to run away before quickly realizing she was feeling weak and unable to breathe.

Knowing something felt off-kilter, she began pacing back and forth on her front stoop while struggling to breathe, and she told her roommate to flag down a nearby police officer.

While she waited, Trinchuk said she stayed mentally alert as she sat slumped down against the cold brick of her apartment complex, and tried to calm herself as she tossed around the idea in her head that she may have just been shot.

Because she was in shock, Trinchuk couldn't pinpoint where exactly she wasn't feeling right, but she said she actually doesn't remember feeling much pain.

When the officer came over, she said he, too, could not tell Trinchuk had been shot and warned her to get inside because calls for "shots fired" had been coming in.

She said she lifted her shirt, expecting to show the officer a bloody bullet wound, but was surprised when she realized nothing was there.

After managing to say the word "ambulance," she eventually laid on the sidewalk as she waited for paramedics to arrive.

"At that point, I almost just like, fully gave up," Trinchuk said.

Once paramedics arrived, they quickly found bullet wounds and bruises on Trinchuk's body and took her to St. Francis Hospital in Evanston in critical condition.

On the way, Trinchuk said she was too weak to open her eyes but was conscious and could hear the paramedics frantically working to get her vital signs stable.

'Whatever Happens ... I'm Gonna Get Through It'

When Trinchuk arrived at the hospital, it was a whirring experience not unlike that depicted in the movies, she said.

One of her final thoughts before being put to sleep for surgery, she said, was the fear of being paralyzed.

When she awoke the next day, on a Saturday, she said her focus immediately turned to her hands and feet, which she was relieved to find could move relatively freely.

"When I realized I could even lift my leg up a little bit, I was like, 'Whatever happens, I'm fine,' " she said. "As long as I'm not paralyzed, whatever happens from here I'm gonna get through it."

She was greeted by her mom and aunt, and by the following Monday, Trinchuk said she was ready to "force" herself to get out of bed and get walking again.

She was told by doctors not to worry about recovering too quickly, and was warned about the mental and emotional toll that can come with being the victim of a crime, including Post Traumatic Stress Disorder.

But Trinchuk said she wasn't interested in feeling sad or taking too much time away from her studies — she was ready to "get back to normal."

She moved back in with her mother in suburban Vernon Hills and decided against transferring from Loyola as to not jeopardize the work she'd made in her nursing program.

Two weeks after being shot, Trinchuk was making the trek from the suburbs back to class. She even recently attended a dance with her sorority — all despite the half-inch bullet hole still in her side.

It was tough, but something she said she needed to do to prove to herself that she could overcome the shooting and move on with her life. It's an opportunity she said another student, Mutahir Rauf, who was shot and killed in 2014 during a robbery, never had.

"Even when I heard his story last year, before any of this, I almost felt for him — I felt like almost connected to him even before anything happened," Trinchuk said. "I felt so lucky that I was given every chance to go back to normal that I couldn't let it just be taken away from me, and he never got that opportunity." 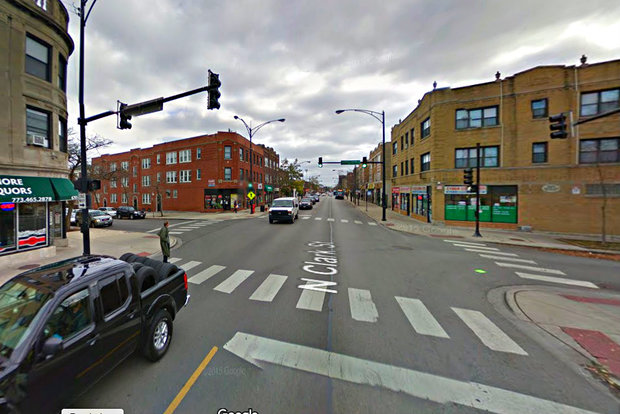 Khrystyna Trinchuk, a Loyola University sophomore, was shot at the intersection of Clark Street and North Shore Avenue on Jan. 22. [Google Maps]

Praying For Her Shooter

Trinchuk, who moved to the U.S. with her mother from the Ukraine at age 4, said she's determined to turn her experience into something positive.

Citing recent Chicago shooting statistics, she said she would like to speak with other survivors of gun violence, as well as their families, to help them deal with what they've been through.

Before being shot, she said she knew the neighborhood's reputation for gang violence and had witnessed drug deals. "But of course, I never thought it would happen to me."

Though she refuses to back down and flashes a bright, confident smile as she talks about her terrifying encounter, Trinchuk said there are also small ways in which she must learn to cope with her new life.

Driving down Clark Street and hearing the sound of a siren, for example, brings back uncomfortable feelings.

Her mom, a surgical assistant, has also helped her shower, change her bandages and get in and out of bed due to a leg muscle affected by her injuries. But the biggest struggle has been realizing and accepting her weaknesses and limitations, she said.

She said she's not experienced any more nightmares since leaving the hospital.

She said she's accepted the man who shot her may or may not ever be caught, but that detectives have kept her updated on leads and have been supportive of her. One officer who was there the night of the shooting even messaged her on Facebook to tell her she was "still alive for a reason."

While she'd like to see her shooter get caught and receive the maximum sentence for the crime, Trinchuk said she's trying to come to forgive him or her.

"I'm Catholic so I asked my priest about it and he told me to pray for [the shooter] ... praying that he will find it in himself to change his life, or tell on someone he knows, or get him to do the right thing."