EDGEBROOK — The contest between the Democratic candidates who will face off next month for a seat in the Illinois House representing the Northwest Side has turned nasty, with both campaigns trading charges of wrongdoing.

But by D'Amico's account, Charlier, one of the leaders of the group that formed to protest the racket made by planes using new east-west runways at O'Hare Airport, is actually a member of the Tea Party determined to restrict funding for Planned Parenthood.

"That's a lie," said Charlier, who is campaigning as a pro-choice independent Democrat. "It is a fabrication. John D'Amico is desperate. He lied on these fliers and he will lie again."

But D'Amico points to Charlier's Twitter account — @CitizenJac — as evidence that the Edgebrook resident voiced "support for these extreme right-wing ideals that could not be further from my own values, the values of the Democratic Party, or the values of the overwhelming majority of the constituents I represent."

D'Amico declined a request for an interview from DNAinfo Chicago and instead provided a written response to Charlier's charges. 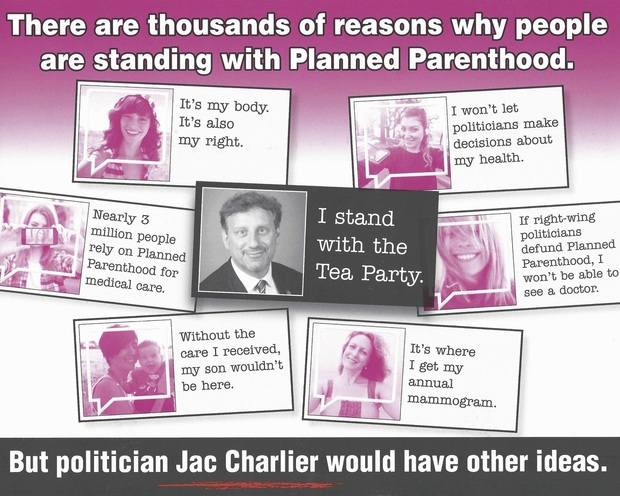 In October 2011, when news of the Tea Party dominated the news as the 2012 Republican Presidential Primary swung into gear, Charlier tweeted: "As I have watched the last few weeks more citizens become active, all I can say is GO!!! Go 99’ers, Go Tea Party, Go all citizens!”

D'Amico has blanketed homes in Edgebrook, Sauganash, Mayfair and the Northwest Suburbs with fliers accusing Charlier of wanting to end federal and state funding for Planned Parenthood, which provides reproductive health services to women throughout the country. The Tea Party has vigorously campaigned against Planned Parenthood.

As evidence, D'Amico's fliers cite another tweet sent by Charlier in January 2015 that said: "We Hope for Real Reform in IL.”

While Rauner — and Republican lawmakers — have touted their proposals as necessary "reforms," Charlier said D'Amico willfully twists his year-old statement to make it look like he is an ally of the deeply unpopular governor. The vast majority of voters in the 15th District are Democrats.

"This is not really about me," Charlier said. "This is how the Chicago machine works. These are poll-driven attacks. [D'Amico] thinks voters are stupid."

Charlier said it was particularly infuriating to be accused of supporting Rauner at the expense of poor and elderly Illinois residents since he helped found Lutheran Advocacy Illinois in 2000, a group that urged lawmakers to spend more to help the state's neediest residents.

"It is a lie that I have anything to do with Rauner," Charlier said. "This makes me angry."

"They are tough and maybe unfair," Mixon said. "But they are business as usual in Illinois, where politics is rough and tumble."

Negative advertisements — like the ones paid for by D'Amico — are effective, especially with voters who don't follow politics very closely, Mixon said.

"Seeing an ad that says a candidate is against Planned Parenthood can stick in someone's mind, especially if that's an important issue to them," Mixon said, noting that no law prohibits political candidates from lying as part of a campaign.

However, anyone who reads Charlier's tweet that mentions the Tea Party would understand that he is celebrating civic engagement on all sides of the current political divide in the United States, Mixon said.

"He even mentions the 99 percenters — the Occupy Wall Street movement," Mixon said. "It is taken out of context by D'Amico."

Such negative advertisements are typical when an incumbent faces a tough race, Mixon said.

"Every Illinois legislator has to be worried that voters will just decide to throw all the bums out of office," Mixon said. "Negative ads can be an insurance policy."

The tension between the two campaign boiled over Feb. 4 when Charlier filed a police report alleging that he was assaulted by two employees of the City of Chicago Water Department. Charlier said they tried to "intimidate" him and his campaign workers at D'Amico's behest.

In addition to his position as state representative, D'Amico is an assistant superintendent in the water department overseeing street repairs.

D'Amico said he had nothing to do with the incident and "would never condone the kind of behavior alleged by my opponent."

No arrests have been made in connection with the report made by Charlier, according to a spokesman for the Chicago Police Department.

The employees were in downtown Edgebrook servicing water meters when the incident occurred, said Gary Litherland, a city spokesman.

"They had no idea it was Charlier's headquarters, and they got a little defensive when they were questioned," Litherland said. "These crews go through bad neighborhoods. Sometimes they have to watch their backs."

The employees involved do not report to D'Amico, and were not in the area at his direction, Litherland said, adding that election-related activities are prohibited while city employees are on duty.

After an investigation by water department officials, no action was taken against the employees involved, who remain on the job, Litherland said.

"We, of course, apologize if someone was offended," Litherland said. "Some people are easily offended."

D'Amico is one of several legislators who has another job in addition to his position in Springfield, a practice that Charlier has repeatedly criticized as "double-dipping."

"D'Amico is all about the status quo, and why wouldn't he be?" Charlier said, noting that D'Amico will earn two pensions when he retires — one from the state and one from the city. "It is working well for him."

If elected, Charlier said he would work to eliminate pensions for members of the General Assembly and would limit state representatives to five two-year terms.

Charlier has explicitly and repeatedly blamed D'Amico for contributing to the stalemate that has left Illinois without a budget for nine months. Rauner has refused to sign a budget until Democratic lawmakers — led by Speaker of the House Michael Madigan — agree to adopt his agenda designed to spur business growth in Illinois. Democrats refused, and the impasse has yet to be resolved.

D'Amico is a close ally of Madigan, and has reliably voted with the Democratic majority.

Since Jan. 1, two political action committees controlled by Madigan and the speaker's campaign account gave D'Amico more than $26,000, bolstering his already flush campaign account, according to records filed with the Illinois State Board of Elections.

At the end of 2015, D'Amico had approximately $320,000 on hand for the campaign, much of it from unions aligned with the Illinois State Democratic Party.

In comparison, Charlier started the year with just $21,800 on hand, according to records filed with the Illinois State Board of Elections.

D'Amico was first elected to the General Assembly in 2004, following in the footsteps of his grandfather former 39th Ald. Anthony Laurino, and his aunt Ald. Margaret Laurino, who has represented much of the 15th District on the Chicago City Council since 1994.

Anthony Laurino served on the City Council from 1965-94, when he was indicted as part of the scandal that allowed people to collect government paychecks for little or no work, but he died before his case went to trial. His daughter, appointed by Mayor Richard M. Daley to replace him, won another term in 2015.

D'Amico's parents, John and Marie D'Amico, were both convicted in connection with the ghost-payrolling scheme, and served time in prison.

Charlier has said he is running to put an end to the "one-family" rule that has governed the Northwest Side for much of his life.

The Democratic primary for state and local offices will take place March 15. The winner will face Republican Jonathan Edelman, who is running unopposed in the primary, on Nov. 8.