Lee Sandlin Remembered as 'Most Interesting Man in the World'

LINCOLN SQUARE — Scores of friends, family, colleagues and neighbors turned out Saturday for the unveiling of honorary Lee Sandlin Way at the corner of Wilson and Artesian. 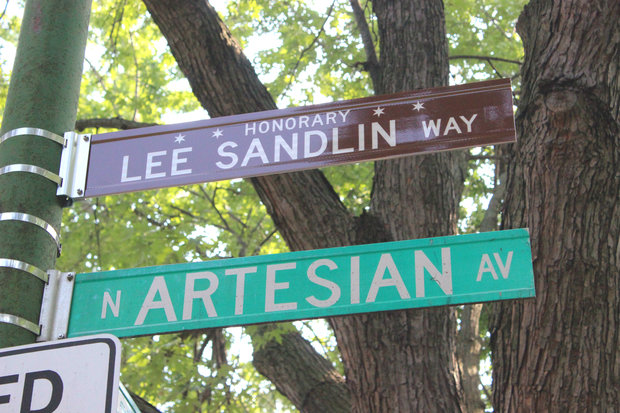 Lee Sandlin, a celebrated author and long-time contributor to the Chicago Reader, received on a honorary street sign. [DNAinfo/Patty Wetli]

It was a fitting memorial for a man who was "fascinated by infrastructure," said Sandlin's wife Nina, drawing knowing laughs from the crowd.

Birds will perch on it, kids will hang their sneakers from it, people will bump into it, Nina said of the sign.

"It will be part of the infrastructure of our city," she said.

Lee Sandlin, a celebrated author and long-time contributor to the Chicago Reader, died suddenly in December at age 58. The sign is within view of the apartment he and Nina called home for more than 20 years.

The unveiling morphed into an impromptu tribute to Sandlin as those gathered for the ceremony stepped forward to express their affection for, and admiration of, a man remembered for his boundless intellect, insatiable curiosity, gift for storytelling and warmth. 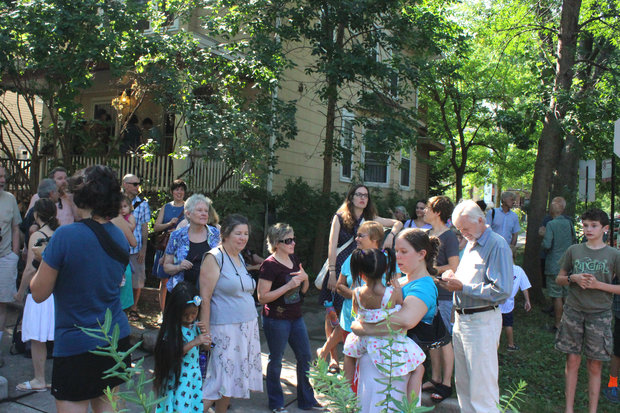 Scores of friends, family, colleagues and neighbors turned out for the unveiling of honorary Lee Sandlin Way. [DNAinfo/Patty Wetli]

His ability to converse with authority on seemingly any subject, from Asian action films to opera, could have been intimidating, but instead was inviting, said friends.

"Anything he liked, you couldn't help but want to join in," said Dani Nichols. "You could count on Lee to light up the room."

"Even if you know you'll never hurdle the bar he set, it's good to have it there," O'Reilly said.

Adding poignancy to the occasion, the unveiling took place on what would have been Sandlin's 59th birthday.

"You know that commercial, 'The most interesting man in the world?'" she asked. "That was Lee."

That her boy, who grew up playing with trains and taught himself to read by sounding out the words in TV Guide, would achieve such stature in the literary world was a constant source of wonder and pride to his mom.

"I used to go to Welles Park to play," said Sandlin Lazich, who grew up at Sacramento and Irving Park. "Just think, a block away, my son's name is on a street." 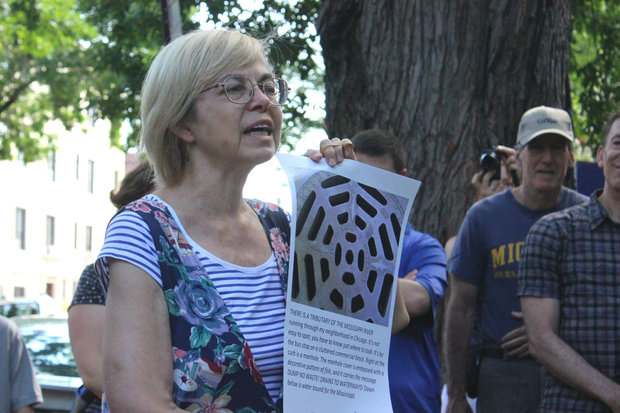 Nina Sandlin reads an excerpt from Lee's book "Wicked River," and shows an image of a nearby neighborhood manhole referenced in the work. [DNAinfo/Patty Wetli]

A number of Sandlin's seminal long-form essays are posted in full at www.leesandlin.com: "Saving His Life" is the story of Nina's father, which spans the Russian Revolution to contemporary America; "Losing the War," about World War II; and "The Man Who Edited Melville," Sandlin's first piece for the Reader.

His books — "Wicked River," a history of the Mississippi River, and "Storm Kings," a look at the first tornado chasers — are widely available for purchase or can be obtained on loan through the Chicago Public Library.