Garden in the City, Vacation Edition: Spying on Boston's Gardens and Parks

LINCOLN SQUARE — You can take the gardener out of the city, and she will just find gardens in a different city.

We spent last week in Boston, cradle of the American Revolution, home of the Red Sox, birthplace of anesthesia (seriously, there's a monument commemorating the event).

So naturally the first thing we did after checking into our hotel ... we went to see the trees. 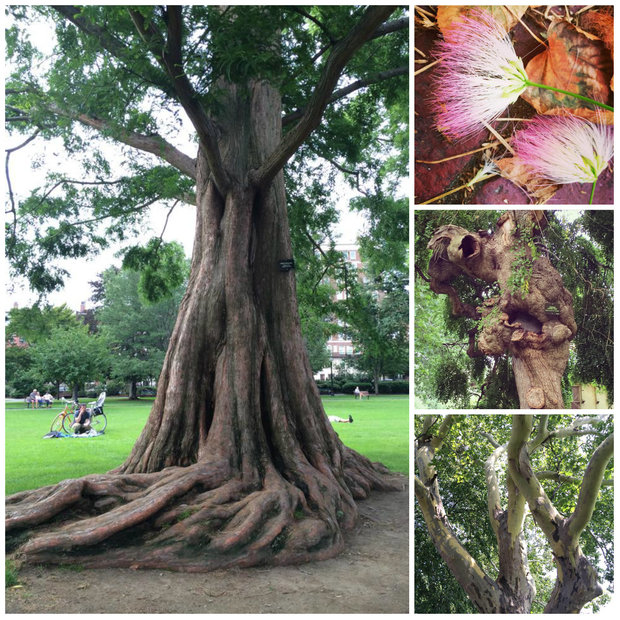 Boston Common is the oldest park in the U.S. and the adjacent Public Garden was the country's first botanical garden.

Guidebooks will tell you about the Swan Boats, Shakespeare performances and "Make Way for Ducklings." Know what they don't mention? The redwood. There's a redwood. In Boston.

I snapped a stupid number of photos of the trunk of this tree and I'd probably still be there if some couple hadn't muscled in to use the bark as the backdrop for their engagement pictures. Grrrr, self-absorbed lovebirds.

But if I hadn't left the redwood, I wouldn't have discovered the Truffala Tree.

Technically, it was a Persian Silk Tree, the likes of which I'd never seen. It's laden with fuzzy pink blossoms, which rained down on the sidewalk below, and I'm convinced it was the inspiration for Dr. Seuss and "The Lorax."

I plucked one of the flowers off the pavement and slipped it into my purse, where it's since shriveled and browned. This is my lone souvenir from Beantown.

Boston Common also happens to be the jumping off point for the Freedom Trail, a self-guided walking tour of the city's historical highlights. It leads visitors past Paul Revere's house, the church steeple where Paul Revere lit his "one if by land, two if by sea" lanterns and the cemetery where Paul Revere is buried.

Did I mention, Paul Revere?

Just when we started to think the city was trapped in a 1776 time warp, we met a man I'll call "Boston Bob."

I'm ashamed to admit I failed to ask this fellow his name, because he changed the course of our vacation. 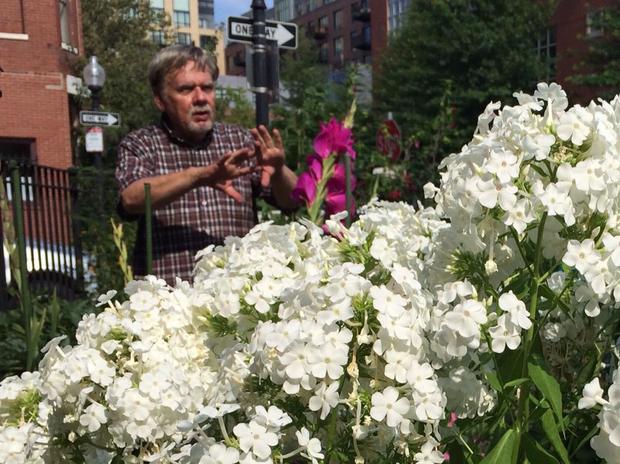 We ran into Boston Bob in the South End, where I had stopped to admire a small community garden we'd stumbled onto.

Bob strolled by with a watering can, I put two and two together and asked, "Do you garden here?"

He did and invited us inside the locked fence because here's the thing about gardeners — we like other people to admire our handiwork.

In a too-good-to-be-true "pahk the cah" accent, Bob told us about his garden, I told him about mine. He showed me his flowers, Dave called up a photo of our vegetable plot on his phone ("I wanted him to know we were legit").

Recognizing a kindred spirit, Bob then shared the kind of insider info you don't get from "Eyewitness Travel: Top 10 Boston," the gist of which was, "If you like this garden, you'll love ...."

This is how we found Berkeley Community Garden, home to 150 gardeners and graciously open to the public. 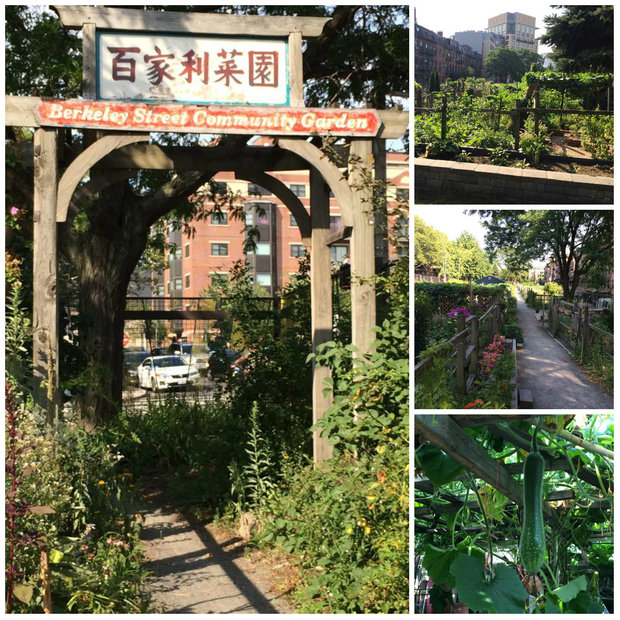 Accustomed to the four-by-eight-foot raised beds at my own Global Garden, I was blown away by Berkeley's super-sized fenced in plots, lined up along a seemingly endless walkway. Intriguingly, many of the plots boasted wood plank arbors laden with vines producing what I erroneously identified as hanging zucchini. Thanks, Internet, for correcting my mistake and introducing me to the hairy gourd/fuzzy melon.

From there, we continued to follow Bob's advice and trekked to the Southwest Corridor Park, which is kind of like a predecessor to New York's High Line minus the high and the hype. 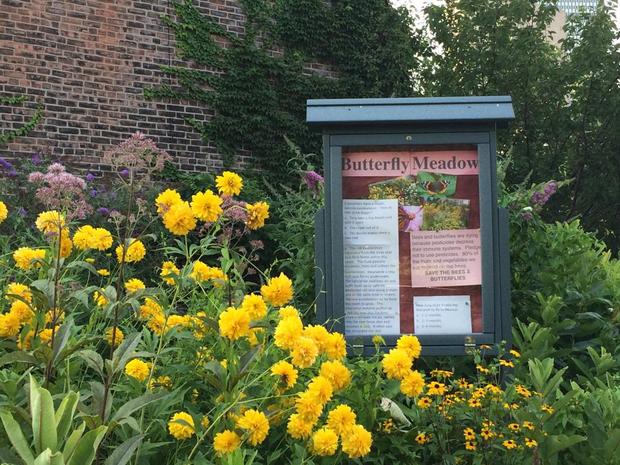 The corridor, decked over a transit line, stretches for nearly five miles and covers 50 acres. We saw only a small section, most memorably a spectacular butterfly meadow teeming with wildflowers. I snapped a stupid amount of photos.

This was Tuesday. Wednesday had been set aside as "Dave's Day," with an agenda devoted to the drinking of beer and tickets to see the Red Sox take on the White Sox.

Established during World War II, Fenway is the only remaining continuously operating victory garden in the U.S. and it's a beauty.

With a whopping 500 gardens spread over seven-and-a-half acres, Fenway's sheer size and variety is breathtaking. Like Berkeley, the individual plots are separated by fencing, and the magic the gardeners have wrought within their boundaries was astounding, including a corn fortress that set my heart aflutter. 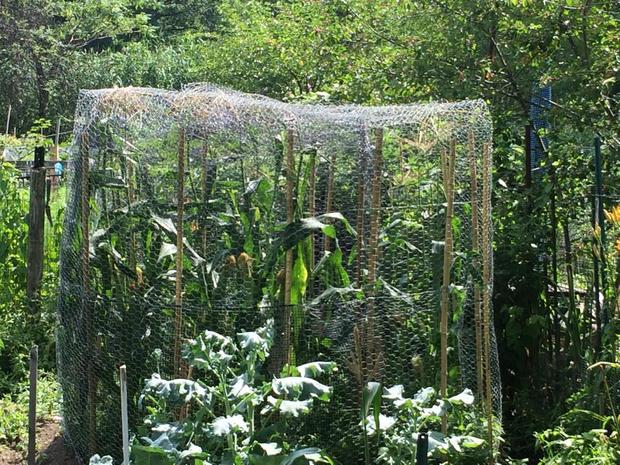 Now that's how you protect your corn from critters! [DNAinfo/Patty Wetli]

According to the Fenway Garden Society website, the plots are 15 feet by 25 feet, but I saw many that seemed exponentially larger, more like the size of a bungalow's back yard. Today, floral gardens widely outnumber vegetable gardens at Fenway, and many were meticulously landscaped with pavers, shrubs and in some cases patio furniture. 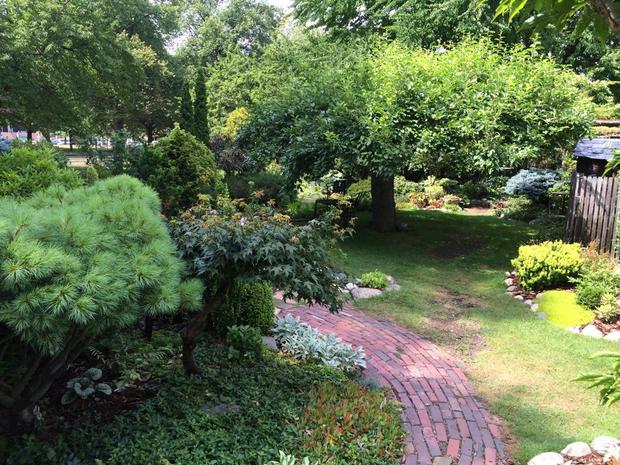 I started snapping a stupid number of pictures and then realized my iPhone wasn't remotely capable of doing this garden justice.

So much pretty and, as it happens, so much history too.

These gardens may not be cast in bronze or stone, but they are as much a monument to hard won battles against powerful forces as are the statues of John Hancock, Ben Franklin and the ubiquitous Revere.

Berkeley Community Garden is situated on a lot where brick rowhouses once stood, and were bulldozed in the 1950s in the name of an urban renewal that never materialized. Members of the area's predominantly Asian community started planting on the now vacant land, and Berkeley was born.

You know where this story's heading. The neighborhood eventually gentrified and in the 1980s the property became attractive to developers. Enter the South End Lower Roxbury Open Space Land Trust and Berkeley was preserved for gardeners in perpetuity. All cheer the power of the spade.

What's now the lovely Southwest Corridor Park was originally slated to become a 12-lane highway along a railroad right-of-way. Residents raised a ruckus, protesting the destruction of their neighborhoods.

Their voices were heard by then-Governor Francis Sargent, who, get this, declared a moratorium on expressways, canceled the highway and in its place created a mix of mass transit (underground), green space and recreation areas. The corridor, which opened in 1990, now includes 11 community gardens, tennis and basketball courts, hockey rinks and biking/jogging/walking paths. All cheer forward-thinking politicians.

In a satellite view of Boston, Fenway Garden dwarfs the nearby Fenway Park. Now picture black top in place of all that green. 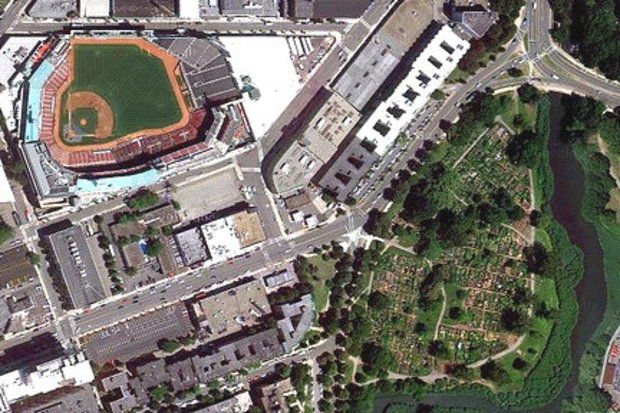 If developers had their way, the victory garden would have been turned over to parking lots. On at least three separate occasions early in Fenway's post-War life, supporters beat back attempts to pave over their plots. All cheer the persistence and passion of the people of Fenway, which evidently extends far beyond baseball.

In the same way that their forerunners chafed under British rule and decried "taxation without representation," modern-day revolutionaries in Boston fought for something they considered as inalienable a right as freedom — a patch of green.

I left Boston feeling a kinship with the city that I hadn't expected. I had found members of my tribe, which, in retrospect, shouldn't have been all that surprising.

After all, Chicago is the home of Montgomery Ward, who insisted that the city's lakefront should be kept "forever open, free and clear." It's also where the good people of Ravenswood Manor staved off plans to extend McCormick Boulevard south through their community.

And my own Peterson Garden Project, like Fenway Garden, has roots in the Victory Garden movement.

To tend and nurture, to be surrounded by nature if only in the smallest of ways, to gaze upon beauty — these are universal human desires that transcend state, country and continental borders.

Back in Chicago, after an interminable cab ride from Midway to our North Side home, I left the unpacking, the laundry and the checking of email for later.

I went outside and watered my flowers.

This 'Sticky Weed' Is Probably Growing In Your Yard, And It's Totally Legal

Meet The Plant Of The Year: It Even Has Its Own T-Shirt

Want To Save The Monarch Butterfly? Kill These Pests

Get Your Garden Growing Now at Seed Sowing Workshop

Brown Is the New Green: The Eerie Beauty of Gardens in the Winter (PHOTOS)

Chicago Snow Coming and Forgot To Winterize Your Garden? No Worries

Garden in the City: A Single Locust Is as Scary as Plague -- But Why?

Garden in the City Extra: How To Protect Your Plants in a Freeze Warning

Garden in the City: Roasting Tomatoes Is Easy, Slicing 184 of Them Is Not

Garden in the City: Wanna Grow the World's Priciest Potatoes? Here's How

Garden in the City: Punked by the Corpse Flower? See Zombie Bloom Instead

Garden in the City: Miracle Ear of Popcorn Ripens, Will It Go Pow or Pfft?

Garden in the City: Is August Too Late To Start Thinking Fall Crops?

Garden in the City: Won't Get Fooled Again, I'm Breaking Up With Corn

Garden in the City: There's Gold in Them Thar Bush Beans