The Best Taco Bell Ever? Yelpers Say Chicago Location 'Out of a Fantasy'

When people think of Chicago fine dining, they might not think of the corner of Clybourn and Wrightwood, and the burnt-orange, faux-adobe fast food restaurant situated across from a strip mall.

But like those two restaurants from award-winning chefs, the Taco Bell at 2575 N. Clybourn Ave. has 4.5 stars out of 5 on Yelp.

Reviewers say it's "straight out of a fantasy," "the best T-Bell experience in Chicago," and "bomb s---."

For this edition of Chicago, Reviewed, we look at the city's most surprising culinary treasure and enlist some self-proclaimed Taco Bell connoisseurs to weigh in on whether it's up to snuff.

All reviews credited to Yelp.

Kyla Gardner went to the Taco Bell to see if it lived up to the hype:

The Taco Bell at 2575 N. Clybourn Ave. may be the best in the world, according to Yelpers. [DNAinfo/Kyla Gardner]

We set out for our dinner on a sunny Monday, intent on finding out just how life-changing our meal could be.

Podgorny was a shift manager of a gas station Taco Bell downstate at age 16, though it was converted into a walk-in beer cooler shortly after her promotion.

"People ask me, how can you still eat at taco Bell [after working there], and seeing that meat in a bag," Podgorny said. "And I say, 'Because it's f------ delicious.'"

For Felgenhauer, Taco Bell was his middle school go-to hang-out with friends.

The knowledge of the menu from both was awe-inspiring, and for someone who has eaten at Taco Bell once in her life, the conversation could be difficult to keep up with. 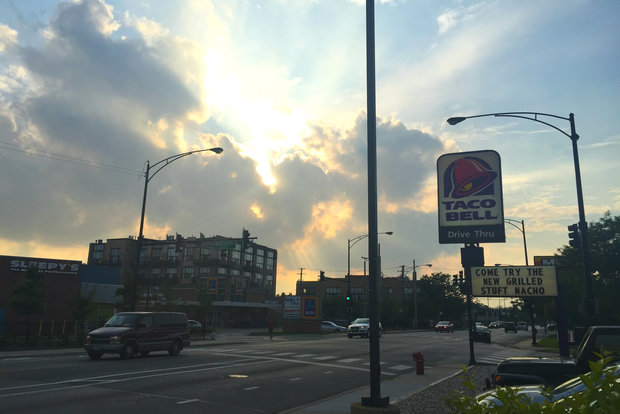 The sun shone upon the Clybourn Taco Bell that day. [DNAinfo/Kyla Gardner]

After some afternoon rain, the heavens parted and the sun shone down upon us and a "new grilled stuft nacho" advertisement just before we journeyed inside.

The evening felt pregnant with promise.

Reading over the more than 200 reviews lavishing praise upon this taco eatery, it's clear many find the food to be no more than standard Taco Bell fare, but it's the customer service that makes the experience exceptional.

T-Bell aficionados say the staff is "unbelievably friendly," "care about what you have to say," and are "obviously happy."

"Customers have used Yelp to recognize the outstanding service at this Taco Bell over the years, and we couldn’t be prouder of the restaurant team for creating experiences that matter to our guests," wrote Taco Bell spokesman Rob Poetsch in an email.

Some say they've successfully gone through the drive-thru pretending to be in a car. One reviewer said he walked into a surprise birthday party that was thrown by friends, but featured custom food and a hand-made sign from the staff, too. 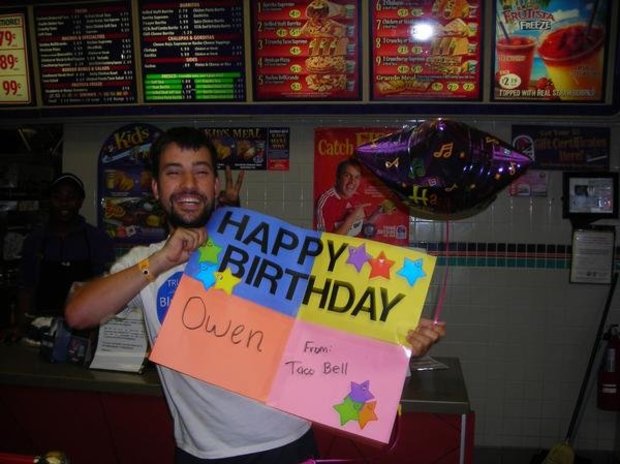 When Owen L.'s friends threw him a surprise birthday party at Taco Bell, he got custom food and a sign from the staff, he wrote on Yelp. [Yelp]

Felgenhauer, Podgorny and I had heard that employees walk around to check on your meal and offer a platter of mints, sauces and hand-wipes.

"I've eaten at this Taco Bell more times than I care to admit and actively go out of my way to eat there," another Taco Bell expert and friend told me. "The hype is legit!"

We ordered a few meals — Chalupas, quesadillas, Crunch Wrap Supremes and a caramel apple empanada — and, well, nothing extraordinary happened.

I needed to clarify that the order was "for here" several times, and the cashier performed her job adequately, but not enthusiastically.

We did not receive balloons or even idle chatter.

Our order got a little mixed up, but a manager was friendly and corrected it quickly. 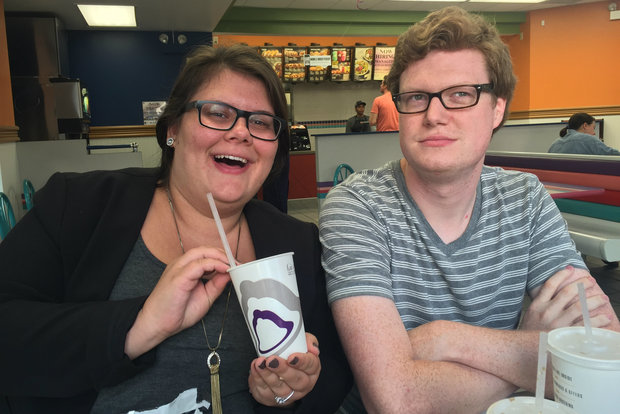 Amanda Podgorny and Ryan Felgenhauer, self-proclaimed Taco Bell connoisseurs, contemplate whether their Taco Bell experience has been the best in Chicago [DNAinfo/Kyla Gardner]

"They didn't screw anything up once we actually got it on the table. That's actually above average. There was no crushed taco," Felgenhauer said.

The food was "on par" with Taco Bell's usual fare, according to the taste testers. 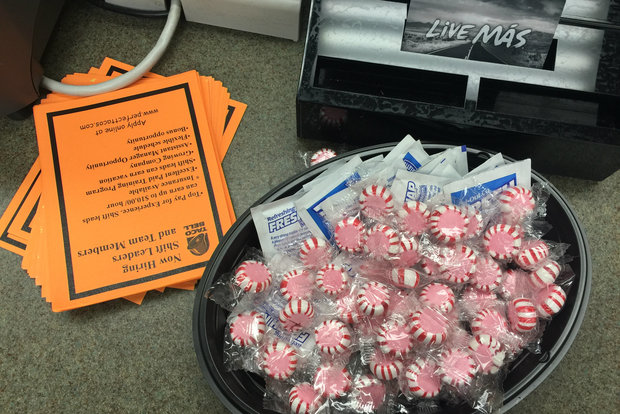 We saw the famous platter of mints and hand-wipes, but it didn't travel to our table.

When Felgenhauer was unimpressed with the hyped-up experience, I pointed out that the tray did exist.

"But the Burger King by me has both of those things, and it has no 4.5 on Yelp," Felgenhauer said.

That Burger King — at Western and Diversey — has 2.5 stars.

"They do get points for the outdoor patio. I think that's very nice," Podgorny said.

So how would our Official Taco Bell Experts rate the Clybourn Taco Bell, the supposed best in the world?

Perhaps it was an off day. Perhaps the Yelp reviews are a bit exaggerated. Maybe people seek out this Taco Bell and see their experience through 4.5-star-colored glasses.

"If I had to sum up my feelings in one sentence, it's a better trip to Taco Bell than the time I got hit by a car outside of Taco Bell," Felgenhauer said. "I woke up in the hospital."

Have you been to this famous Taco Bell? What was your experience? Tweet us at @DNAinfoCHI.