CHICAGO — Neighborhoods throughout Chicago dealt with flooding Monday evening after a massive storm that set off tornado sirens and pummeled the city with rain.

Streets and viaducts were reported flooded from Edgewater to Downtown to Humboldt Park. Josh Atterberry, an Uptown resident, said Argyle Avenue was flooded in Uptown west of Broadway. The Lake Shore Drive viaduct at Wilson was also flooded.

If it rains anymore you're literally going to have a swim across Argyle. #Chicago #flooding #Uptown pic.twitter.com/AE5RJD46HI

Flooding also was occurring on Foster Avenue between Pulaski Road and Bernard Street, near the border between North Park and Albany Park, where work on a new stormwater tunnel aimed at curbing flooding is supposed to start this summer.

The bottom of the offramps to Belmont and Diversey avenues going northbound on the Kennedy are closed due to flooding, according to State Police.

In the west suburbs, the inbound Eisenhower between Des Plaines and Harlem avenues is closed due to flooding as of 11:25 p.m., officials said. As of 10 p.m., outbound traffic was open along the same section.

Here's what it looks like getting off of Lake Shore Drive at Hollywood http://t.co/deZ8Xpzgjt pic.twitter.com/B9vOcFgK5J

The CTA shut down service on a suburban stretch of the Blue Line between Forest Park and Harlem.

There were also reports of funnel clouds on the Southwest Side near Midway Airport. NBC5 reported two were spotted near the airport. The National Weather Service could not confirm that.

Ominous clouds shrouded the city as rain pounded parts of Chicago. It came as fans lined up outside the United Center to see Game 6 of the Stanley Cup Finals.

A Cubs home game scheduled for Monday night was postponed.

Parts of the city could be covered in up to four inches of rain Monday evening, forecasters said.

The National Weather Service issued a flash flood warning covering the city through 10:30 p.m. with heavy rainfall. The tornado warning expired at 5:15 p.m.

The Chicago Fire Department tweeted that the viaduct at 4600 W. Division St. in West Humboldt Park was not passable.

"The north half of the city will get the most rain," said NWS meteorologist Kevin Donfrio. 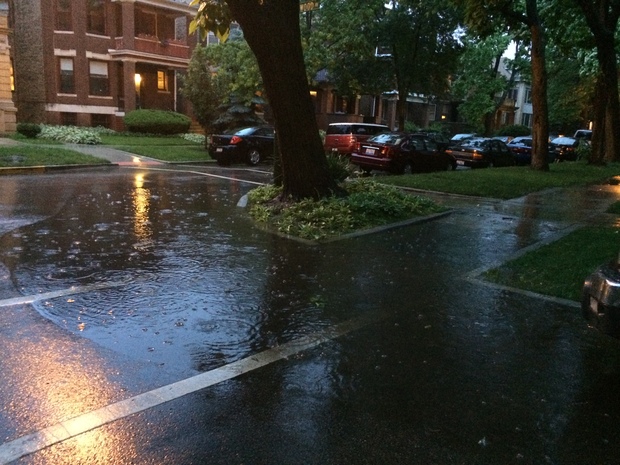