New U. of I. Research Center In S. Loop To 'Jolt' Job Growth, Officials Say

By Heather Cherone |&nbspOctober 19, 2017 2:30pm
@HeatherCherone
Twitter Facebook Email More
"This is a big win for the city of Chicago, and a big loss for the West Coast," said Mayor Rahm Emanuel of the Discovery Partners Institute.
View Full Caption
DNAinfo/Heather Cherone

SOUTH LOOP — The redevelopment of 62 acres of undeveloped South Loop riverfront will include a new public-private research facility that supporters said will deliver a "jolt" to Chicago's economy by super-charging job creation and economic development.

The University of Illinois will create the Illinois Innovation Network, which is designed to develop "solutions in computing and big data, advanced materials, food and agriculture, and biosciences and health," officials said.

The first piece of that network will be the Discovery Partners Institute, set to be built on long-vacant land near Roosevelt Road and the Chicago River donated by real estate firm Related Midwest, which plans to build a new neighborhood just south of Roosevelt Road between the river and the Metra railroad tracks. 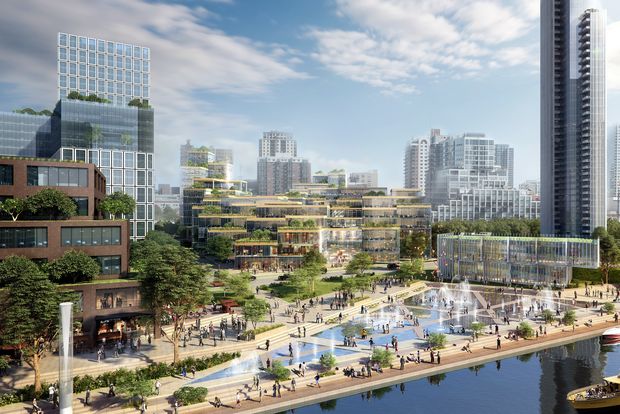 A rendering of the Discovery Partners Institute in the South Loop. [Credit: Icon/Skidmore Owings Merrill/3XN]

Disgraced developer and political fixer Antoin "Tony" Rezko once received city approval to build as many as 4,500 homes on the site but eventually lost the property.

Gov. Bruce Rauner said the state's economy depends on the ability of the state's universities to attract top students and turn them into permanent residents.

"We will drive a transformation of the Illinois economy that is unparalleled," Rauner said.

A statement from the governor's office said the facility would be "financed primarily from private resources though [Rauner] hopes to persuade state and local officials to invest in the program as well."

University of Illinois President Timothy Killeen said the institute will "add to the momentum that has been growing rapidly here in Chicago" fueled by several tech incubators, including 1871 and mHub.

"[The institute] will deliver a high-powered jolt, yes, a jolt, at the kind of scale that can massively accelerate job creation and economic development," Killeen said. "And we're all in."

The institute will be the home of 90 of the nation's top research faculty, who will work with University of Illinois, Northwestern University and University of Chicago professors to tackle the most intractable problems facing the world, Killeen said.

Once the institute is at full capacity, about 1,800 students annually will spend up to four semesters at the institute working with businesses in Chicago "honing their talents and planting roots," Killeen said.

That is designed to halt the flow of college graduates from Illinois once they get their diploma, Killeen said.

The network will connect facilities across the state and enhance course offerings at the nearby University of Illinois at Chicago, Killeen said.

Detailed plans of institute will be developed in the next year, with the facility fully up and running by 2022, Killeen said.

"This is a big win for the city of Chicago, and a big loss for the West Coast," said Mayor Rahm Emanuel.

The public celebration of the project came on the same day proposals were due to Amazon CEO Jeff Bezos, who is looking for an American city to build the tech giant’s second home.

Rauner's office said in a statement that the institute "is referenced in the City of Chicago’s bid to win the Amazon HQ2 competition.

"This is a pipeline of talent that can drive economic growth and increase competitiveness for every type of business," Rauner said.