CITY HALL — A $70 million plan to build a high school in the Read-Dunning area on the Northwest Side took a key step forward Thursday, despite concerns about area truck traffic posing a danger to students.

The plan had originally been labeled by the Public Building Commission as a "middle grades school" but CPS leaders are "leaning very strongly" toward establishing the school as a satellite campus for freshmen at Taft High School, 6530 W. Bryn Mawr Ave., according to CPS demographics director Jim Dispensa.

The school's role and boundaries will be announced in fall 2018. It will include an academic center for 7th and 8th graders "if attending data indicate that there would be sufficient capacity," Dispensa said.

City planners revealed key details of the project Thursday, proposing to sit a three-story brick building at the northeast corner of the 800,000-square-foot plot where Irving Park Road intersects Oak Park Avenue. It would accommodate up to 1,200 students when it opens in fall 2019.

The Chicago Plan Commission unanimously approved the proposal, setting the stage for construction to get underway by the end of the year.

Plans outline two wings sprouting from a two-story atrium, adjoining a pair of outdoor courtyards. One wing would include a cafeteria and gymnasium, with the other filled with classrooms.

The school would joined by a turf football field and track facing Irving Park Road, officials said. To its northwest, across Bittersweet Place, another plot of land would be set aside for potential development by the Chicago Park District.

Six people representing businesses near the site spoke out against the proposal Thursday, taking specific issue with the one-way traffic scheme mapped out by city planners.

The plan would direct cars and buses toward the school through a new driveway from Oak Park Avenue, adjoined by a sidewalk and dedicated bicycle lane. Cars would leave through Normandy Avenue, currently a dead-end road that empties onto Montrose Avenue and Forest Preserve Drive.

The circular route would "provide orderly, efficient and safe circulation through the site" and "provide additional space for green space," according to Michael Wortham, a traffic consultant hired by the city to study the area.

But the handful of businesses that face Normandy — including three manufacturing plants — panned the city's plan to send hundreds of school children along a route used for heavy-duty truck deliveries.

"The idea of mixing 80 truckloads a day with children is a disaster waiting to happen," said John Dudlak, the property owner for MPS Paper Tube & Can, 4221 N. Normandy Ave.

"Every time there's a truck backing into one of our docks, that creates a choke point, and everything comes to a stand-still," Dudlak continued. "So we hope you review the traffic pattern, because we question the wisdom of doing that."

The planned development approved Thursday gives officials leeway to change the traffic route, officials said. Commission members asked the planners to return with an updated plan in the next six months.

Marc Schulman, the owner of Eli's Cheesecake, also spoke out against the proposal Thursday. Along with traffic concerns, Schulman suggested the plan include more green space and easier access to Wilbur Wright College.

He also questioned the future of two multi-ton piles of salt and mulch being stored on the site by the city's Streets and Sanitation Department and the U.S. Forest Service, respectively.

Ald. Nicholas Sposato (38th) has vowed to see the piles trucked out of the site, saying they "look like crap."

A representative of the city's Department of Streets and Sanitation department did not respond to requests for comment. 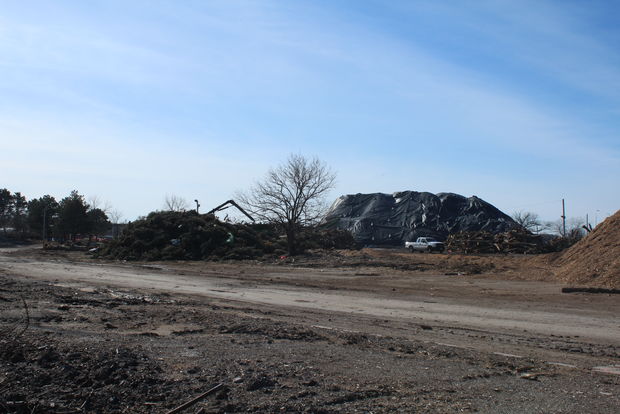 City officials have not said whether they plan to move two giant piles of salt and mulch currently being kept on the site. [DNAinfo/Alex Nitkin]

Bringing a new high school to Dunning was a key plank of Sposato's 2015 campaign, and he's since lobbied to see the school built as an antidote to school overcrowding on the Far Northwest Side.

CPS has been pining to build a school in the Read-Dunning area since at least 2003, according to district officials. A law passed in 2010 gave CPS a 10-year window to build on the land before control reverts back to the state, which still uses the open land tract to store salt and mulch.

Taft principal Mark Grishaber has lobbied hard in support of the alderman's proposal for a "Taft South," arguing that it could be the only way to relieve the school's overcrowding without stripping the resources that have helped Taft, 6530 W. Bryn Mawr Ave., climb to level 1 status.

But a vocal "task force" of Dunning parents is advocating for the building to open as an independent high school, saying the neighborhood had long been promised its own four-year institution, including by Sposato.

At the same time, students and teachers at Steinmetz College Prep High School, 3030 N. Mobile Ave., have questioned why the $70 million school is being built at all, when the neighboring Steinmetz is hemorrhaging enrollment and enduring bone-deep budget cuts.