$60 Million Strip Mall Needs A New TIF District — How Does That Work?

But that plan depends in part on an unspecified amount of funding to come from the creation of a new Tax Increment Financing district, the Foster/Edens TIF.

TIF districts have become an increasingly hot-button issue: Opponents of the financing tool claim that TIFs are little more than "slush funds" designed to line the pockets of political cronies; proponents argue that TIFs goose economic development in areas where it wouldn't otherwise occur.

With a proposal for a new TIF district on the table, here's a simplified look at how they work and the steps Foster/Edens will need to take on its road to approval.

What Is a TIF District?

A TIF district is a designated redevelopment area with highly specified boundaries.

Once a district has been created, all properties within its boundaries are assessed in order to determine a base amount of property tax revenue. For Foster/Edens, this base has been pegged at $26.5 million.

Over the next 23 years — the lifespan of a TIF — all property tax revenue above that established base is diverted from its usual recipients, like Chicago Public Schools and the Park District, and is funneled instead into the TIF district's "account."

These funds can then be allocated to subsidize public and private projects within the district that meet the guidelines of the TIF's redevelopment plan (which can be changed at any time), ranging from school annexes to basketball arenas.

If no significant redevelopment occurs within a district's first seven years, a repeal process is automatically triggered.

A TIF can also be terminated early if the district achieves its goals before the 23 years are up, assuming all outstanding commitments have been met.

A Quick History of TIF

California was the first state to make use of TIF districts, back in the 1950s.

Chicago didn't join the party until decades later. Its first TIF district — the Central Loop TIF — was created in 1984 with the aim of revitalizing the city's economic center. The infusion of public dollars spurred investment in new hotels and the rehabilitation of theaters and cultural venues.

There are now 145 active TIF districts in Chicago, including two created in 2016. Dozens more have either expired or been terminated or repealed. According to the Cook County Clerk's office, more than one in four properties in Chicago lie within a TIF district.

How is a new district created? Here's the checklist:

The area in question broadly encompasses 232 acres bounded by the North Branch of the Chicago River; Pulaski Road; Cicero, Foster and Lawrence Avenues; and the Edens Expressway.

Gompers Park is situated within the proposed TIF's boundaries, but the primary target of redevelopment is a property formerly occupied by Sunstar Americas, a dental products manufacturer that moved to Schaumburg.

Sunstar's factory was demolished in 2016 and the site, in the 4600 block of West Foster Avenue, had the potential to sit vacant indefinitely.

Sunstar still owns the land, with the sale to developers pending actions including the creation of the TIF district. The property is being monitored and maintained in the interim by Sunstar, according to a spokesman for Ald. Margaret Laurino's (39th) office. 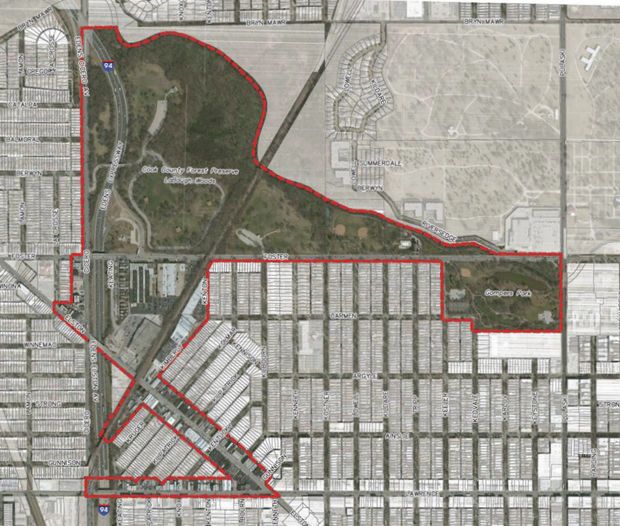 The boundaries, in red, of the proposed Foster/Edens TIF district. [Provided]

According to a definition provided by the city: A redevelopment plan includes the area’s history, current land uses and the factors that qualify the area as eligible for tax increment financing. The plan also states the goals and objectives for the TIF and outlines the redevelopment budget.

Laube Consulting Group drafted the Foster/Edens redevelopment plan after surveying the area's infrastructure and assessing other conditions including the state of existing commercial and residential properties. (See complete document below.)

Among the group's observations: Facilities at Gompers Park are in need of "significant repair and replacement," and bridges and overpasses in the area are "severely dilapidated."

The consultant's report also factored in the likely need for environmental remediation of the Sunstar site, which is not uncommon when former manufacturing sites are redeveloped, according to Ald. Laurino's office.

In summary, the report concluded: "The area is not reasonably anticipated to be developed" without the use of TIF.

Laurino hosted a community forum Sept. 28, at which the Foster/Edens TIF proposal was introduced to attendees.

This 15-member group is appointed by the mayor and reviews and recommends action on all things TIF-related.

The Foster/Edens redevelopment plan was presented on Oct. 10 to the commission, which accepted the proposal for review.

At that same meeting, the commission also set the dates for the next two steps in the process: a public meeting of the Joint Review Board and a public hearing.

• The Joint Review Board includes representatives of taxing bodies affected by TIF — the Chicago Board of Education, the Chicago Park District, Cook County, etc. The board's recommendation regarding the TIF, whether in favor of or against, is strictly advisory and non-binding.

• A public hearing allows for comment from taxpayers who own properties within the proposed district.

The Foster/Edens hearing has been scheduled for 1 p.m. Dec. 12, in City Council chambers, 121 N. LaSalle St. Property owners will be notified via regular and certified mail.

Finally the TIF will be introduced to City Council at a date still to be determined. Final approval resides with council members.