Teacher Death Sparks Debate: Does CAPS Have A Race Problem?

ROGERS PARK — A rally and vigil that police organized in the wake of slain teacher Cynthia Trevillion's death sparked a long-simmering debate among Rogers Parkers about whether long-promoted strategies like "positive loitering" or community policing actually work — or even encourage racial profiling.

On Tuesday, as Trevillion, 64, was buried after she was killed by a stray bullet Friday night, many continued the debate on how to effectively fight violence in the community. The debate became public again Monday night as hundreds of community members gathered to remember her at the vigil.

There, representatives from the Chicago Police Department promoted forming block clubs, positive loitering, where residents gather at the scene of crimes or street corners to send a message to criminals, and attending CAPS meetings, where police meet with the community.

But the event ended early after the speaking engagement turned into a shouting match, and on Tuesday some still questioned whether the proposed solutions were effective.

Specifically, some said that CAPS meetings were attended mainly by white residents, as were positive loitering events, and weren't welcoming to people of color. But organizers, including 49th Ward Ald. Joe Moore, said a big part of the solution hinged on more minorities attending the events to have their concerns heard.

Among the speakers at the vigil Monday was Glen Brooks, the Police Department's director of public engagement, who said shootings like Trevillion's occurred when residents weren't "vigilant" — a statement that struck some attendees, such as Jim Ginderske, as a one-sided "lecture" rather than a helpful discussion.

"The event appeared set up to suppress having any actual dialog," Ginderske said Tuesday. "It felt like it was designed to lecture the community about how we need to do more to come together. You're blaming the community? There are all sorts of groups in this community, but they ignore us."

"Again and again, we have these large groups coming together for positive change, but then we're shut out of the conversation, and we're certainly shut out of policy decisions," he said. "It's maddening."

When one man tried to speak up about the deeper roots of violence Monday, like education funding, Ginderske said the man was swiftly removed by police while some chanted, "Get him out of here!"

The removal played out "like at a Donald Trump rally," he said.

John Warner, a longtime Rogers Park resident, CAPS beat facilitator and organizer of a positive loitering group, was among those speakers interrupted — something on Tuesday he said he was "not expecting at all."

He was in the midst of telling the crowd that positive loitering didn't "go after people of color, we go after what they do" when people began to shout over him, he said.

"People ... have it set in their mind that I'm a white man and I'm after the black people to push them out [and] that is totally wrong," Warner said. "I love Rogers Park because of the diversity, I'm not trying to change it, I'm trying to make it safer for everyone. And if they don't f------ understand that, that's their problem."

Ralph Edwards, a community activist with Ceasefire who is a reformed gang member, said though it made people uncomfortable, a platform to speak about ways to combat community violence should include a variety of voices.

"I think the disruption is needed," Edwards said. "As soon as someone said positive loitering was racist, and schools were failing, people clapped. I think people wanted to hear something fresh.

"This has a lot to do with race, and people are scared to talk about it. They're scared of what they don't know."

Moore said that while speakers who interrupted the event made "legit and worthwhile" points, the method they used to express their points was "completely unacceptable."

"It just felt incredibly inconsiderate and not productive in trying to achieve understanding in finding common ground," Moore said.

As a black man, Edwards said he felt his attendance was especially necessary because "there needed to be more people of color out there" to share their voices and perspectives, he said.

Edwards said he tells the people he works with to attend CAPS meetings, but they are resistant because they are overwhelmingly attended by white residents whose concerns often involve people they perceive to be unsavory characters — a practice he believes bolsters racial profiling, he said.

He would like to see police engage and speak to the young people he mentors to spread the message they want to work together and not just "lock them up," he said.

Moore acknowledged CAPS was a "work in progress" but said he didn't believe it led to racial profiling — though if it did, more people of color should attend regularly and make sure to press their point, he said.

"Unless you show up, your voice is never going to be heard," Moore said. "And if you do encounter that resistance, the answer is not to just walk away, but to press your point. You need to attend and encourage people of color to attend and express their views because otherwise, their views won't be heard.

"I think those perspectives are important, and privileged people, white folks, they need to hear them." 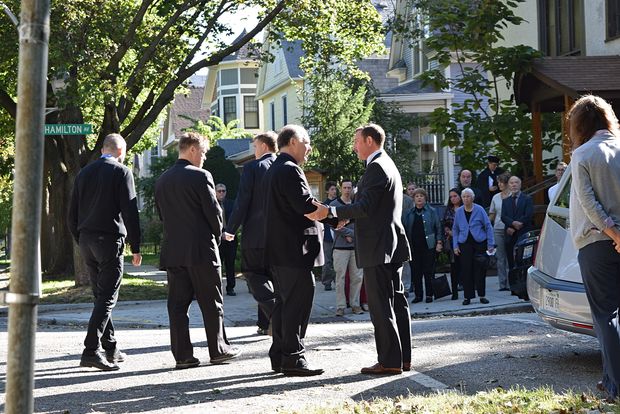 A community event planned in the aftermath of Cynthia Trevillion's death has opened a broader discussion of how violence in the community is viewed and handled. [DNAinfo/Linze Rice]

Warner defended positive loitering and said that CAPS meetings were open to anyone who wished to attend. He said his group has, and continues, to try and recruit people of color to join, but to little avail because some don't want to be viewed as "Uncle Toms."

It's not "your color I'm going after, it's what you're doing," Warner explained.

"People hear 'positive loitering,' and they think we're going after black people because they're the drug dealers and gangbangers. Wrong."

When asked what his group could do to change that perception, he said there was "nothing we can do to help that, that's their mindset."

He rejected being labeled a "racist" and would "be thrilled" if more people of color participated in positive loitering.

Moore said the strategies outlined weren't the only things needed, but they help.

"I would challenge any of the people who raise these concerns, rather than just sit on the sidelines and bitch, is to go to the meetings and state their concerns and ensure that racial profiling, if it does occur, doesn't happen again," the alderman said.

Residents have attempted to raise issues like racial profiling and mistrust between police and people of color in Rogers Park at CAPS meetings before, but have been shut down.

After a police task force community meeting last March, which was shut down by protestors, residents did raise concerns at a CAPS meeting but were told it wasn't the place to discuss such matters.

Between the task force meeting and the following CAPS meeting, another volunteer beat facilitator sent a letter to residents in the police beat that said protesters were "self-centered egoists."

Instead, money needs to be more thoughtfully invested into neighborhoods and community services like schools, mental health facilities and additional crisis training for police officers in order to make long-term change, Edwards and Ginderske said.

In the future, Edwards said he hopes to see other shooting victims get as much attention as Trevillion.

"What happened last night, it needs to happen every time someone's killed," Edwards said Tuesday. "The concern and the [being] mad and all that — that many people need to come out every time."

Ultimately, Warner said the onus for finding a solution to community violence falls on everyone.

"It's on all sides; we all have to come together to solve this problem," he said. "It's not a white problem, it's not a black problem ... it's everybody's problem, and it's going to take everybody to solve it."