BEVERLY — The stretch of Western Avenue that runs from 91st Street in Beverly to 119th Street in Morgan Park has long been synonymous with bars painted Kelly green and adorned in shamrocks.

These dimly-lit Irish pubs have served bottles upon bottles of light beer for decades. And as for food, it would be hard to find a two-mile strip with more pizza parlors anywhere. Other comfort foods abound, including late-night subs, Chicago-style hot dogs, Italian beef and more.

But many of the newcomers to this commercial stretch have bucked the trend, bringing a fresh vibe to the businesses district by adding craft beer, healthy food options, shops designed to take advantage of natural light and more.

It's not uncommon to have to wait for a table on weekends at Horse Thief Hollow. Caroline Connors, the executive director of the Morgan Park Beverly Hills Business Association, credited the brewpub that debuted in 2013 at 10426 S. Western Ave. for setting a changed tone along the corridor.

Other independent businesses that have followed include Open Outcry Brewing Co., which opened July 21 to both hungry and thirsty crowds. A hip taco joint is on the way. A niche quilt shop seems to be thriving along with a trendy coffee spot that sells handmade doughnuts.

There's also a new lunch place that specializes in made-to-order chicken wraps, a longtime new and used bookstore that swapped its overcrowded store for a larger location with giant windows and others investing in the area too.

Connors's group represents the businesses on this busy strip and added that new enterprises — including bars — have largely gone away from focusing a very small group of customers living in the immediate vicinity. The new entrants seem to be trying to attract a larger, more regional customer base, she said.

Here's a look at some of the new additions (and a few subtractions) to the business district in recent years. The new arrivals mostly shun the idea the area will forever be known merely as the home of the ready-made pub crawl known as the "Western Avenue Death March." 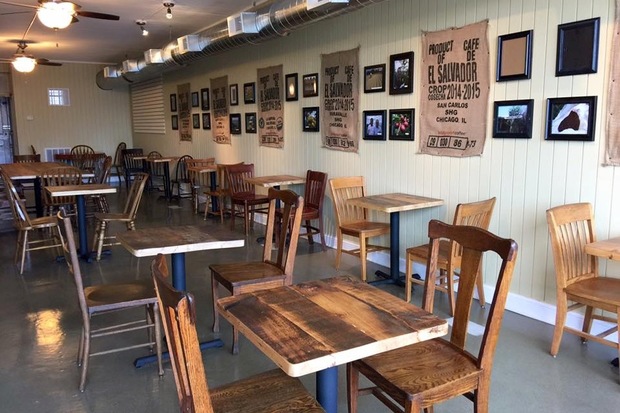 Bridgeport and Beverly are often looked upon as Chicago's Irish twins. It's perhaps this familiarity that led Mike Pilkington, the owner of Bridgeport Coffee Co. to open a shop at 9135 S. Western Ave. on Dec. 14, 2015, replacing Hardboiled Coffee Co.

Pilkington actually expanded previous tenant's footprint, filling the storefront to the south with mismatched wood tables and chairs. In doing so, Bridgeport Coffee seems to have found an audience of those eager to get out of the house while also taking advantage of the free WiFi. 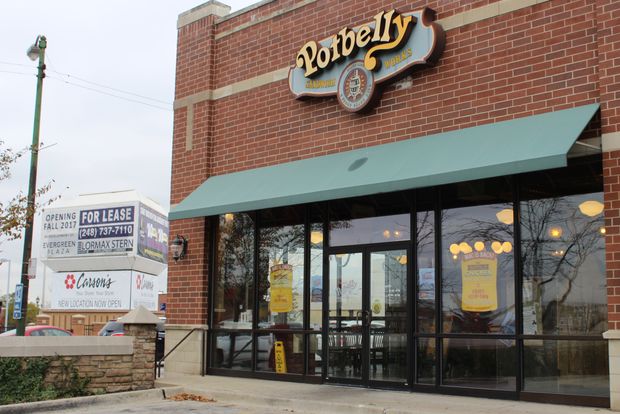 Not all the development on Western Avenue has worked out well for Beverly. Potbelly Sandwich Shop will soon move from the southeast corner of 95th Street and Western Avenue across the street to a new storefront in Evergreen Plaza.

The sandwich shop gains a drive-through window by moving to the adjacent suburb and leaves the shopping center it once anchored largely vacant. There's been talk of tearing down the strip mall as a result. 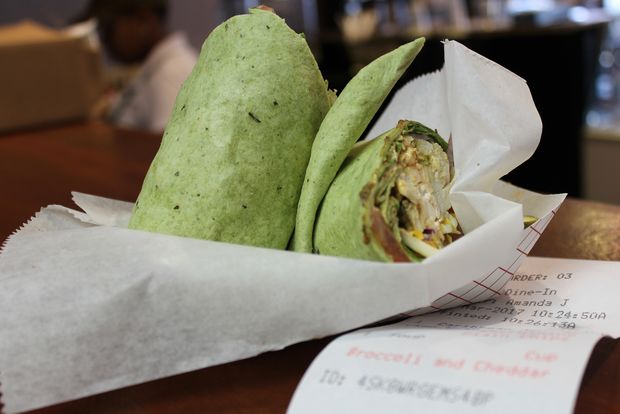 The owners of Ain't She Sweet Cafe built their brand in Bronzeville by serving Caribbean jerk chicken wraps and fresh sandwiches. The mother-and-daughter team of Margo and Ayisha Strotter opened their second location March 6 at 9920 S. Western Ave.

The cafe that sits just south of Beverly's Janson's Drive-In prides itself on offering healthy food. The owners drew praise Aug. 9 from the Obama Foundation, which highlighted their efforts to hire and invest locally. 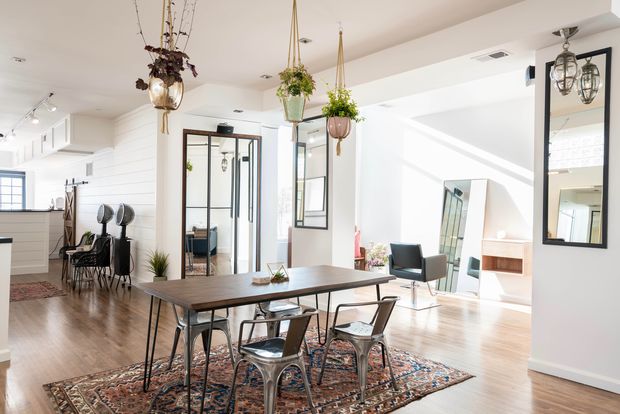 The shop at 10215 S. Western Ave. opened April 25 and takes its name by combining the first names of owners Mary Ryan and Lauren Majka. The Beverly and Morgan Park residents graduated from the cosmetology school in 2011.

Their bright, airy salon replaces Optimo Hat Co., which had occupied the storefront for 25 years before moving its retail operation Downtown. Optimo's hats are still made in Beverly, but production moved from the combined storefront to a renovated firehouse at 1700 W. 95th St. last year. 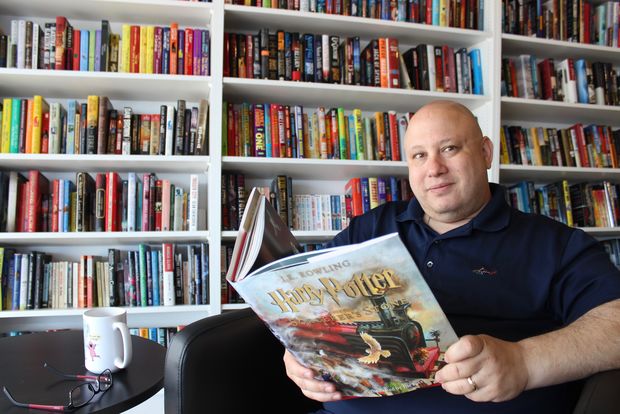 The new and used bookstore has been in the Beverly neighborhood since 1989 and more than doubled its footprint by moving July 1 to 10324 S. Western Ave. Owner Keith Lewis also opted to keep his previous store around the corner at 2419 W. 103rd St.

The idea is to focus the retail operation along busy Western Avenue and keep the smaller spot as a dedicated place for book signings, poetry readings and other literary and community events. 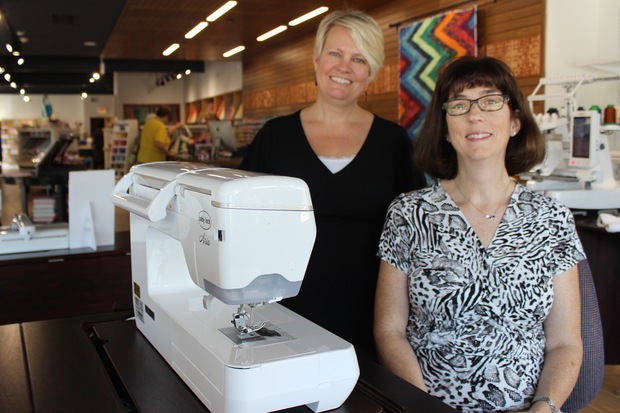 Many neighborhood residents bemoaned the loss of Koda Bistro in July 2013, but The Quilter's Trunk has found success converting the white table cloth restaurant at 10352 S. Western Ave. to a sanctuary for sewing enthusiasts.

Owner Katie Nathwani and store manager Lisa Wilberding opened their quilt shop Sept. 11, 2015. Since then, quilters from throughout the Midwest, including some on bus tours, have found their way into the store. 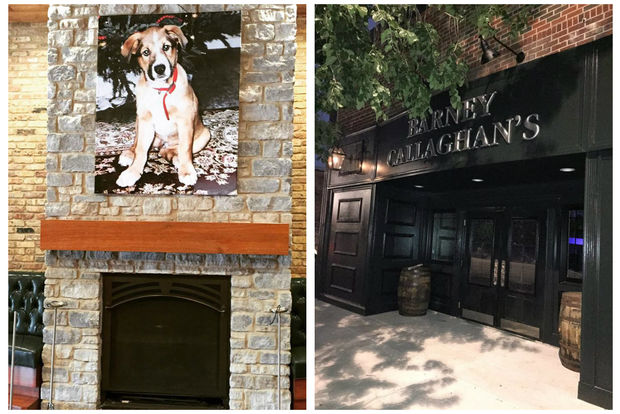 Keegan's Pub had practically been an institution at 10618 S. Western Ave. before owner Bernard Callaghan decided to tear apart the bar known for serving perfect pints of Guinness. He poured $750,000 into the business he'd previously owned for 25 years.

The renovated pub nearly doubled in size and was renamed Barney Callaghan's, after the family's late dog. A vaulted ceiling that's made to look like the inside of wine barrel has been attracting customers since the bar reopened Aug. 27, 2015. 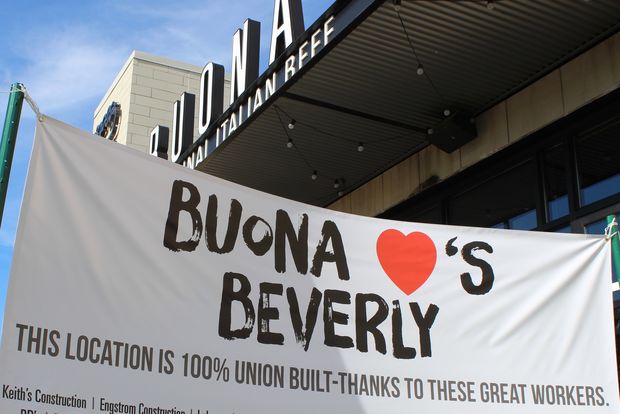 After nearly five years of teasing, Buona Beef opened its first restaurant within the city March 21, 2016, at 10659 S. Western Ave. in Beverly. The restaurant has seen steady crowds, despite a union flap that drew picketers last month. 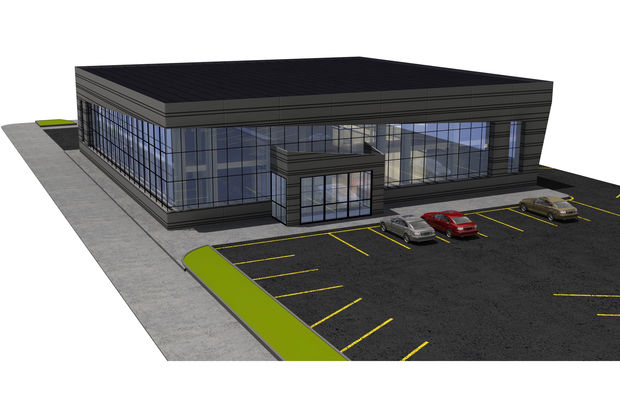 The former Chesterfield Federal Savings and Loan at 10801 S. Western Ave. in Morgan Park sat vacant for six years before a massive renovation started this summer. The building is being redesigned as a medical office building.

Beverly-based First In Realty Executives Inc. is handing the deal for the 26,000-square-foot structure. The building had been known for its towering columns, several of which were removed in the renovation. Others were kept and will be enclosed as part of the redesign. 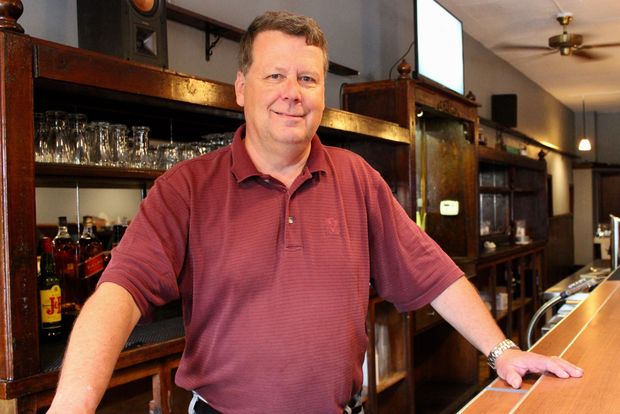 With new floors, a fresh coat of paint and a few other improvements, Kelly's Tap is a throwback to the bars that have defined the strip for decades. Kelly is also hoping patrons of nearby Home Run Inn and Open Outcry Brewing Co. will stop in for a drink after dinner. 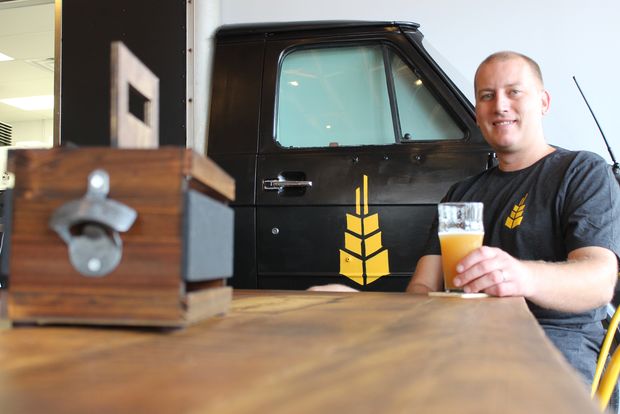 The brewery that pairs craft its beer with Neapolitan-style pizzas opened July 21 at 10934 S. Western Ave. Owner John Brand walked away from his career in the futures market March 9, 2016, to buy O'Brien's Pub.

He then converted the pub and several adjacent storefronts into the brewery that features a roll-up garage door that opens the street. This allows fresh air to fill the brewery as the weather permits. 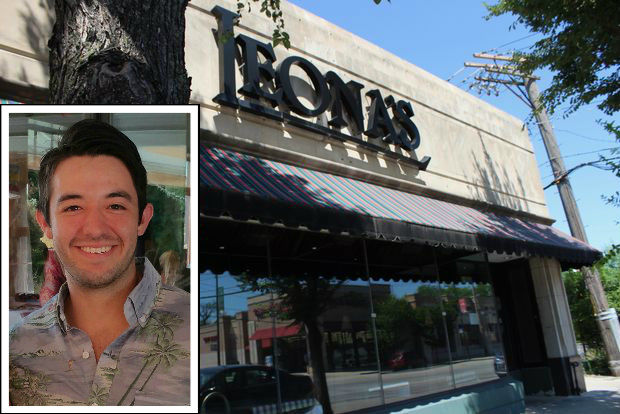 He said the design will be far more trendy than traditional Mexican restaurants, favoring alternative rock music over mariachi bands. 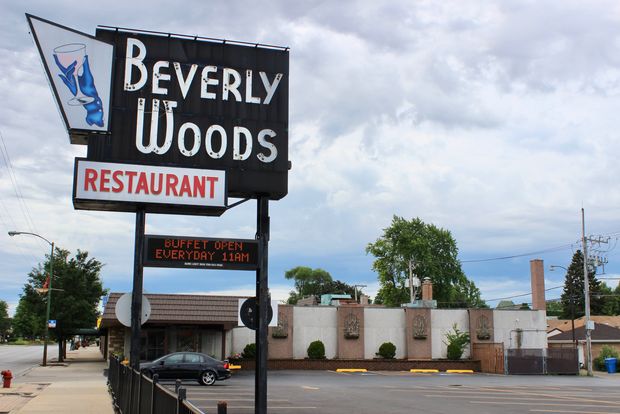 McGann said the building needed both cosmetic upgrades and costly infrastructure improvements. His two children wanted to pursue other interests, and McGann, 67, did not want the burden of a large loan.

The building and nearly one-acre property is for sale for $1.29 million. 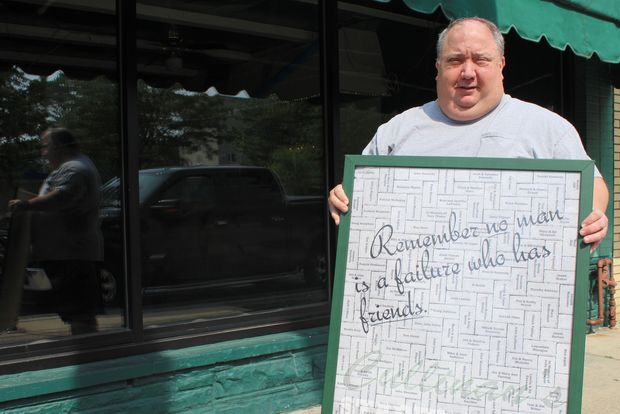 Before owner Dan Cullinan closed Cullinan's Stadium Club Aug. 1 at 11610 S. Western Ave., customers raised $14,215 via GoFundMe to help pay his back taxes. The bill was settled Dec. 29, but the fundraiser could not offset the drop in business over the summer months.

Cullinan admitted that the bar scene on Western Avenue has changed since he opened 29 years ago. He said those that have invested heavily in their businesses in recent years have seen success, while many of he older spots have struggled. 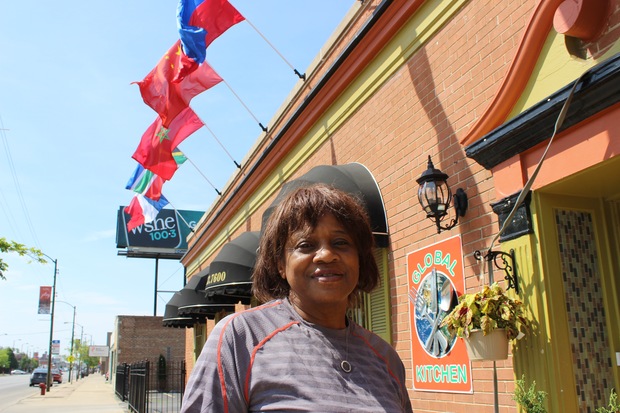 The menu at Global Kitchen in Morgan Park is as eclectic as the flags that fly outside the restaurant at 11722 S. Western Ave. Owner Essy Glenn of Beverly serves American favorites like pork chops and chicken wings alongside Asian cuisine, French delicacies and more.

The restaurant's dining area reflects this same variety. Opened May 27, 2016, Global Kitchen is carved up into tiny rooms. Each room is designed to take hungry customers on a visit to different countries, including Mexico, Japan, England and beyond. 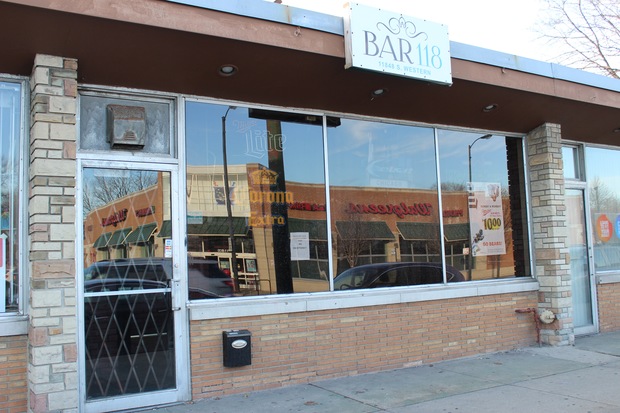 This unassuming bar at 11848 S. Western Ave. in Morgan Park had been plagued with problems for more than a year before it closed following a police raid Aug. 5, 2016. Several days after the raid, an undercover police officer detailed multiple drug buys at Bar 118.

The liquor license for the property was later revoked.