JEFFERSON PARK — Crews broke ground this week on a set of sidewalk bump-outs and bike lanes near the intersection of Lawrence and Central avenues, launching a $250,000 effort to slow down traffic in a corner of Jefferson Park city officials have long flagged as dangerous.

The bump-outs, which extend sidewalks into the street to shorten pedestrian crossings, are being built on three sites: along the east side of Central at Giddings avenues, at Central and Leland avenues, and at Central and Ainslie Street. 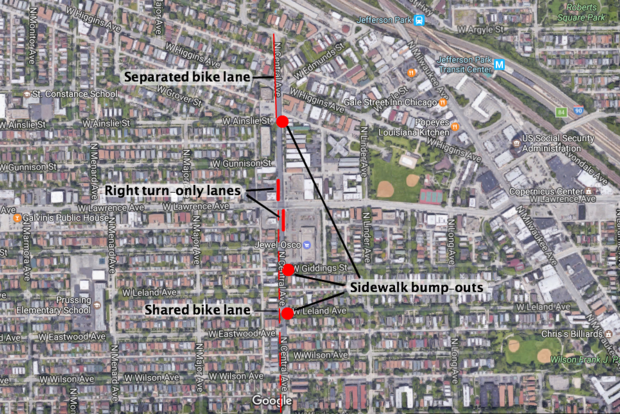 Sidewalk bump-outs, right-turn-only lanes and new bike lanes are being planned for the half-mile stretch of Central Avenue. [Google Maps]

As a precursor to the bump-outs, a city ordinance approved last December stripped away rush hour parking restrictions along Central between Eastwood and Warwick avenues in Portage Park, making the thoroughfare a permanent one-lane street along the 1½-mile stretch.

Right-turn-only lanes are also in the works for Central on both sides of Lawrence Avenue, officials said. They'll split up two new bike lanes: a separated lane along the three-block stretch from Goodman to Gunnison stereets, and a shared lane tracing the half-mile from Lawrence to Montrose avenues.

Officials are aiming to wrap up the entire project by the end of October, according to Ald. John Arena's (45th) staff.

The redesigned street will mesh traffic through new Starbucks drive-thru, set to take over the former site of Brown's Chicken, 5601 W. Lawrence Ave. The Seattle-based chain has not yet announced an opening date for its new location.

Officials had long planned the changes, but the project was kick-started last fall after 2-year-old Noah Katz was fatally struck by a van making a left turn turn at Central and Giddings.

The crash was the latest episode in a turbulent history for the section of Central between Higgins and Montrose avenues. City transportation officials counted 367 traffic crashes along that stretch between 2010 and 2014, including two that left pedestrians dead. 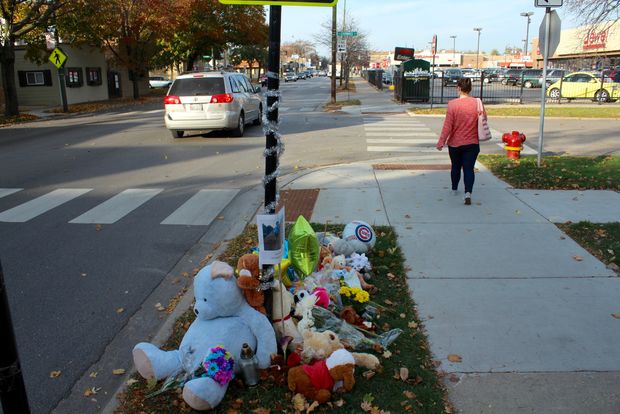 A makeshift memorial for Noah Katz, 2, at the intersection of Giddings Avenue and Central Avenue, where he was struck and killed by a van in November 2016. [DNAinfo/Alex Nitkin]

The projects are being funded out of Arena's $1.3 million capital spending budget for 2017, for which he skipped the participatory budgeting process to get caught up on stalled plans from previous years, he said.

His budget for this year also set aside about $500,000 to re-pave 12 residential streets, plus another $100,000 to patch up sidewalks, according to Owen Brugh, Arena's chief of staff.

Three additional bump-outs are being planned along Milwaukee Avenue, Brugh added — they're bound for the intersections at Giddings, Warner Avenue and Cuyler Street.