By Howard Ludwig |&nbspSeptember 8, 2017 6:41am | Updated on September 12, 2017 11:46am
@howardaludwig
Twitter Facebook Email More
Abbey Murphy, 15, is a sophomore at Mother McAuley Liberal Arts High School in Mount Greenwood. She verbally committed to play hockey at the University of Minnesota as a freshman and has her eyes set on the 2022 Winter Olympics in Beijing.
View Full Caption
DNAinfo/Howard A. Ludwig

Murphy, 15, has been playing hockey since she was 7 years old and has excelled in the game like few others. In fact, Murphy was selected as the youngest member of Team USA's elite under-18 squad for a tournament last month in Lake Placid, N.Y.

Murphy scored a pair of goals in the three game series. Team USA defeated rival Canada, taking the first and last games of the three-game series. The 22 players chosen for the American team are often considered candidates for the Olympic Winter Games. 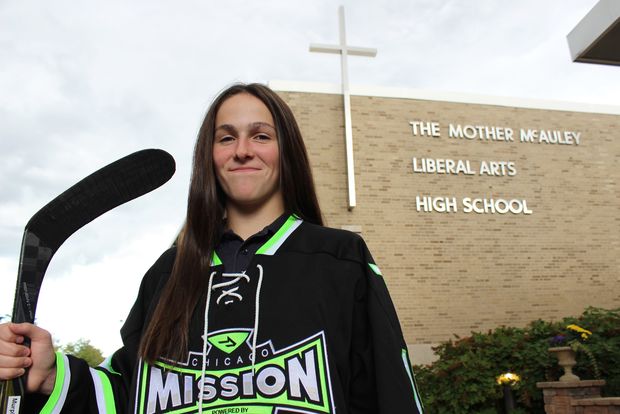 Abbey Murphy, 15, of suburban Evergreen Park was the youngest member of Team USA's elite under-18 team. She scored two goals in the three-game tournament, helping to defeat their Canadian rivals. [DNAinfo/Howard A. Ludwig]

As a freshman, Murphy verbally committed to play hockey at the University of Minnesota — one of the top collegiate women's hockey programs. The Golden Gophers were among the four finalists for the 2017 Women's Ice Hockey Championship.

Murphy became interested in hockey while watching her neighbor, Tom Pratl, practicing in his backyard in suburban Evergreen Park. Pratl played for St. Rita High School in Ashburn and later played for a year with the Helena Bighorns in Montana.

Meanwhile, Murphy started her hockey career on a coed team with the St. Jude Knights Hockey Club. She was one of only a handful of girls on the south suburban house league team but stood out.

"Abbey comes from a great family. She is one of the best players in the country. We at St. Jude couldn't be more proud of her," said AJ Hernacki, who served as St. Jude's skills coach and assistant director during Murphy's tenure there.

At age 10, she joined the Chicago Mission, an elite AAA hockey program. Murphy is the only South Sider on the team that practices roughly five days a week in suburban Bensenville. Games for the under-16 women's team are played throughout the United States and Canada.

Murphy actually led the team with eight goals and three assists over the weekend as her U16 team won the NAHA Labor Day Tournament in Burlington, Vt. The team seemed to gel after the victory, which should help them in their tournament this weekend in Stoney Creek, Canada.

"I like hockey with all the girls and all of us getting along," Murphy said. "It is so much more competitive [than other sports] and there is a lot of training to do."

Murphy's season with the Chicago Mission is just now underway. But there's another Team USA tournament coming up in January in Russia. Many of the same players from the Lake Placid team are expected to make the trip.

She said the 2017-18 U.S. Women's National Team has already been selected. These 23 players will compete in the Olympic Winter Games in PyeongChang 2018. The goal for Murphy and others on Team USA's younger squads is to secure a spot in the Beijing 2022 Winter Olympic Games.

The Olympics "have always been a goal," Murphy said with a shrug and smile. "You never know."

Hockey success does come at a cost. Murphy said she doesn't get to hang out with classmates much as she's often on the ice. The graduate of Most Holy Redeemer School in Evergreen Park also gave up basketball to focus on hockey.

And even when she is not skating, Murphy works out with a trainer in suburban Elmhurst. She also needs to find time to complete her homework, which is typically done in the car before and after practice.

And despite her hard work, success and seemingly upward trajectory into world of women's hockey, Murphy deflected any praise.

"My coaches are the ones that pushed me this whole time," she said.