This 'Snowman' Has Kept Cool Atop The Art Institute All Summer

By David Matthews |&nbspSeptember 6, 2017 5:24am | Updated on September 9, 2017 9:40pm
@DavidLMatthews
Twitter Facebook Email More
"Snowman," a sculpture by two Swiss artists, has been left out in sun all summer at the Art Institute.
View Full Caption
DNAinfo/David Matthews

DOWNTOWN — The Art Institute has a cool new sculpture: a "snowman" that's been left out in the sun all summer.

The aptly titled "Snowman," made by a pair of Swiss artists, will be outside on the museum's third-floor Bluhm Family Terrace through Oct. 15. It's stoked a lot of curiosity and inspired a lot of selfies since making its debut in May at the Art Institute, 111 S. Michigan Ave., museum officials said.

Devised by Peter Fischli and the late David Weiss, the sculpture presents a funny juxtaposition: a summertime snowman. But there's also a serious side to the piece, which the museum said aims to "confuse hierarchies and values by creating systems doomed to fail."

"Like an astronaut, that's his lifeline," said Susanne Ghez, the museum's adjunct curator for modern and contemporary art. 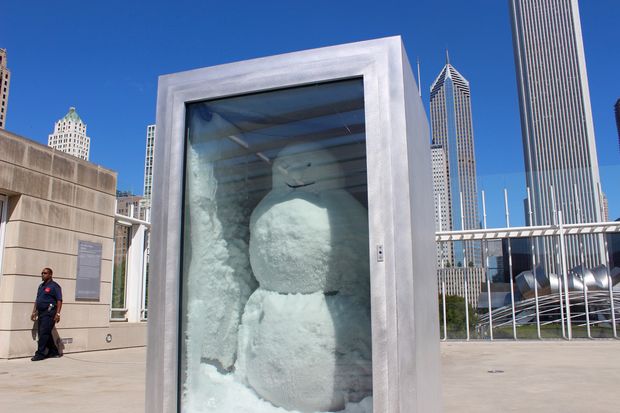 Not that the museum has had trouble keeping the art alive. The "Snowman" is actually a copper sculpture covered in frost. The plug is wired so it can't be unplugged.

The snowman's display case is refrigerated, but doesn't require as much water as a real snowman would. A technician refills the tank with distilled water and contours the snowman's face to the artist's specifications every morning. The snowman once had an (accidental) fang and is now growing a little bump on its nose. A tube in the refrigerator sprays mist that frosts the glass.

"It's high-maintenance in terms of checking it, but self-sustaining once it's up and running," said Lekha Waitoller, exhibitions manager for modern and contemporary art at the museum.

The snowman's replacement on the terrace will be "Unslumbrous Night," a series of bronzes inspired by Picasso paintings made by British ceramicist Andrew Lord. The bronzes debuting Oct. 26 will depict the fragility of time and human life, and like "Snowman," will use the weather as part of its message.

"Just like anywhere else in the museum, we're interested in showing what we think is important artwork that hasn't been shown before," Waitoller said.