CHICAGO — The craft beer scene in Chicago is unlike what its earliest pioneers could have envisioned in the early 1990s.

When Rocky Albazi added a beer menu to his offerings at Sheffield's Wine and Beer Garden back in 1992, people thought he was crazy.

"There wasn't that much craft beer for us to educate people on," Albazi said. "There was a lot of [time spent] searching. But that's kind of how it started."

Even as the flood of competition shows little signs of slowing — there are at least 100 craft breweries in Chicago and its surrounding suburbs — some of the nation's biggest craft brewers worry that the market has peaked.

But in Chicago, beer experts like Albazi are finding new ways to draw in customers who might not know a pale ale from a pilsner and helping them unearth the best beer the Second City has to offer.

For Sheffield's, 3258 N. Sheffield Ave., teaching customers about its 250 draft and bottled beers has been part of the beer garden's mission for more than 27 years. Since April, the team has worked on transforming its Beer School events into a weekly podcast.

Hosted by Teddy Brunson, formerly of "Chicago's Best," the half-hour podcast highlights a different brewery each week on the "Beer School Podcast." So far, he's interviewed the minds behind Goose Island, Lagunitas Brewing Company and Maplewood Brewery and Distillery — all business pals that Albazi has gotten to know in his three decades running Sheffield's.

"I've got a lot of stories about the craft industry, and I really didn't know how to get that out to the public," Albazi said. "So it was fortuitous that Teddy and I happened to be having a pint of beer, and I started telling him what I was thinking."

Brunson, a regular at Sheffield's, immediately saw the potential for Albazi's vision. On the show, which the pair hope to eventually turn into a television show, Brunson discusses brewery origin stories, infusing the personal tales with the history of craft beer in Chicago.

"We want someone who says they're not into beer to still find the show interesting," Brunson said. "It's about the people behind it, the fun success stories."

Many of the brewers left their day jobs as lawyers or businessmen to follow a passion for brewing that likely began in their garages, Brunson noted.

"A lot of these craft beer guys were home brewers who just wanted to experiment and do something a little different from the norm," the host said. "They really are artists; they tinker, the experiment. They don't rest on their laurels."

At the end, he quizzes the brewers on which of their creations would pair best with Sheffield's menu of Irish nachos, wings, barbecue platters and burgers.

Once listeners have compiled a list of Chicago breweries to visit, they can turn to the Beermiscuous Field Guide, a new publication from the Lakeview taproom meant to give its readers the inside scoop on 100 breweries and taprooms across the Chicago area.

For those who have visited Beermiscuous, 2812 N. Lincoln Ave., it will come as no surprise that the beer cafe has kept extensive tabs on the city's offerings. On its wall hangs a sprawling map of the region and its breweries, which provided the basis for the field guide, said Andrew Hilsberg, the Beermiscuous marketing manager. 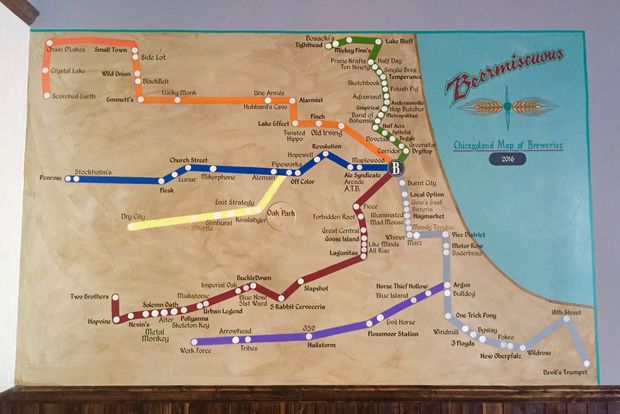 Still, it took about three months to compile the 100 entires, which include detailed notes on each venue's history, its annual production, features like whether it serves food, tips from the pros and a few of its most popular beers.

To Hilsberg, it was interesting to see how pockets of breweries have sprung up across Chicago neighborhoods and in the suburbs. 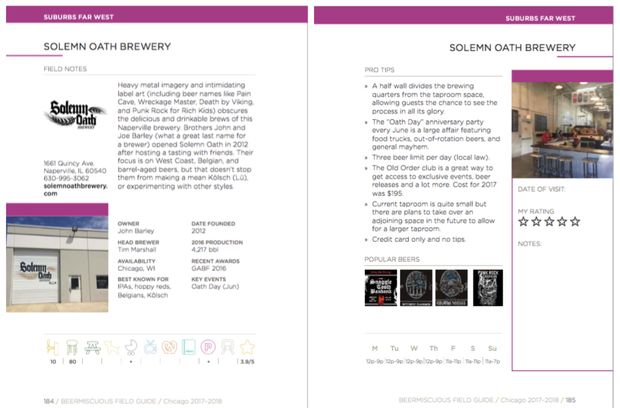 "You've got Malt Row up in Ravenswood, but now down in Pilsen, you've also got three breweries, all within walking distance of each other," Hilsberg said, referencing Moody Tongue, Alulu Brewpub and the newly opened Lo-Rez Brewing.

The knowledge is an "extension" of what the "beeristas" of Beermiscuous already discuss with customers who want to try the more than 200 local beers and learn more about craft beer, he said.

The Beermiscuous Field Guide, which is sold for $14.95 at the bar and online, is useful even for those who have never stepped in a brewery, but want to see what the city has to offer, Hilsberg said.

"Everyone knows there are a lot of breweries, but they have no idea how extensive it is," Hilsberg said. "Hopefully this pushes some people over the edge to say, 'Lets go explore.'"