Twitter Facebook Email More
Cases of LaCroix were based taxed at Walgreens on Wednesday, though the unsweetened drink is supposed to be exempt from the new "Pop Tax."
View Full Caption
DNAinfo/Linze Rice

DOWNTOWN — Cans of LaCroix sparkling water are being incorrectly taxed under the new "pop tax" at Walgreens, leading to outrage among its fans.

DNAinfo reporters bought LaCroix at spots around the city and found Walgreens is incorrectly applying the tax — which adds a penny per ounce to the bill starting Wednesday — to the unsweetened sparkling water. One shop in Edgewater even posted neon-green signs near its LaCroix cases to inform customers the sweetened beverage tax had gone into effect.

The tax adds up to 72 cents per six-pack of LaCroix, but a Cook County spokesman said the tax should not be applied to LaCroix or other unsweetened, sparkling waters.

Walgreens did not apply the tax to its own brand of unsweetened, flavored, sparkling water, a check found.

"While preparing to collect the County’s tax on sweetened beverages, we inadvertently coded some of our products incorrectly within our system that applies taxes during the checkout process," Walgreens said in an emailed statement. "We are working to resolve this complex issue as soon as possible."

The tax has quickly led to tongue-in-cheek uproar among LaCroix lovers, who are known for their passionate love of the beverage.

"First the[y] came for my income, and I said nothing," one person posted on Reddit on Wednesday. "But I just got taxed $1.44 on my LaCroix, which is clearly marked as unsweetened ... . Even with all the crazy s--- happening in this country, this makes me want to riot the most." 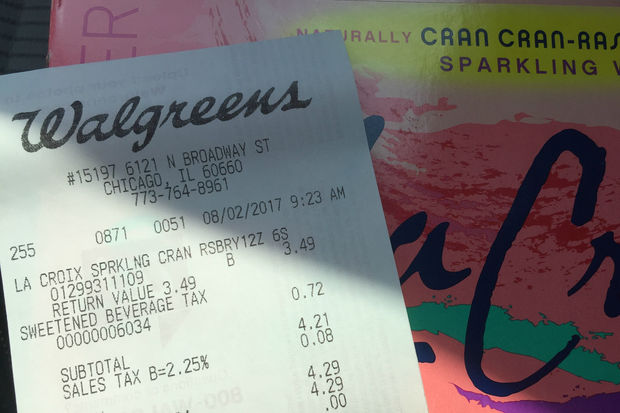 Cases of LaCroix are being incorrectly taxed, DNAinfo found. This receipt shows LaCroix being taxed while Walgreens' brand of unsweetened, flavored water is not taxed. [DNAinfo/Linze Rice]

The tax is supposed to apply to sugary drinks (with some exceptions), but LaCroix's boxes explicitly state the drinks have "0 sweetener."

The architect of the tax, Cook County Board President Toni Preckwinkle, even tweeted Tuesday that LaCroix and other unsweetened, sparkling water brands were not subject to the tax.

Unsweetened sparkling water, like LaCroix, is NOT subject to the sweetened beverage tax. Don’t believe otherwise.

The county hasn't received complaints from customers about the tax being applied incorrectly, spokesman Edward Nelson said, but people should check their receipts after buying an item and can ask the store for a refund if necessary.

"Our ultimate goal is to ensure the tax is being applied correctly and fairly," Nelson said early Wednesday afternoon. "We will continue an open dialogue, as we have for the last eight months, with retailers and work to ensure beverages are being correctly taxed."

The Illinois Retail Merchants Association, which has been battling the new tax in court, is working with businesses to help them understand what should and shouldn't be taxed, said Tanya Triche Dawood, the organization's vice president.

"I know that they're doing the best job that they can, but, as you can imagine, with all the thousands of products that can qualify there will probably be some mistakes made," Triche Dawood said. "It could be a tricky test to make sure that everything that's supposed to be taxed is taxed."

There's always concern an item could be taxed incorrectly, Triche Dawood said, and it's not necessarily simple to reprogram a store's technology when a tax goes into effect.

"It may take a few days to make sure that we've worked out all kinks," Triche Dawood said. "I don't think there's been any new tax that's been put in place that hasn't had some new issues in the beginning."

It's not the first time Walgreens has taxed drinks it shouldn't: The chain incorrectly applied the Chicago Bottled Water Tax to seltzer and sparkling water (including LaCroix), possibly for years, DNAinfo found in 2015.

Walgreens was sued for the mistake by a Chicago man, but the case was ultimately dismissed.

After that happened, DNAinfo found other stores — including 7-Eleven and Whole Foods —  also were incorrectly taxing sparkling water brands.

I need verification that the Cook County tax on pop/sugary drinks does not include LaCroix because there's no sugar in that and I need it.

Does anybody know if the new Cook County beverage tax applies to LaCroix? 😰😰😰

Hi Jeff! This should not affect Lacroix! :)

Walgreens receipts show the chain is applying the "Pop Tax" to LaCroix, which is supposed to be exempt.
View Full Caption
DNAinfo/Mina Bloom and Alisa Hauser
Cases of LaCroix are being incorrectly taxed, reporters found. This receipt shows La Croix being taxed while Walgreens' brand of unsweetened, flavored water is not.
View Full Caption
DNAinfo/Linze Rice
Twitter Facebook Email More

Guardian Angels Fire Back at Rahm, Say Mayor Doesn't Know What Group Does