Mural, Mural On The Wall: Art Coming To Overlooked Areas Of Lincoln Square

LINCOLN SQUARE — A new mural project aims to bring attention to areas of Lincoln Square outside the "square."

PaintWorks, an initiative of the Lincoln Square Ravenswood Chamber of Commerce and the neighborhood's Special Service Area, will support eye-catching artwork throughout the neighborhood, which too often is thought of as just the stretch of Lincoln Avenue between the gateway arches on Lawrence and Leland avenues.

Launched at the beginning of 2017, PaintWorks will spearhead the creation of up to two murals a year. The first site has already been chosen at 2803 W. Lawrence Ave. — on a wall next to Easy Breezy Laundromat.

Though a concept is still being finalized, Franklin Riley, managing partner of Chicago's FultonMarket Gallery, has been chosen as the artist of the inaugural PaintWorks mural.

Riley's work typically features landscapes in tranquil colors. The Lincoln Square mural will likely draw inspiration from the nearby Chicago River and motifs from the Giddings Plaza fountain, according to Ryan Warsing, program manager for the Lincoln Square Ravenswood Chamber of Commerce.

A quirky aspect of Riley's process: He plants small "stencils" of his designs throughout the neighborhoods where he works (see examples below). So be on the lookout for free art scattered in unexpected places.

Each PaintWorks mural is budgeted at $3,000 for the artist's fee and materials, with a crowdfunding component to encourage buy-in from the surrounding community.

Painting on the Easy Breezy wall is set to start in mid-August. 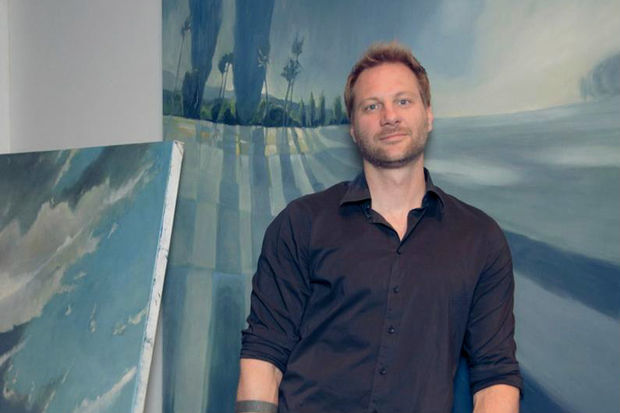 Franklin Riley has been chosen as the artist for the first PaintWorks mural. [FultonMarket Gallery]

Gotta get those lights in the pics... #freeart #finderskeepers #fultonmarketgallery

A wall next to the Easy Breezy Laundromat has been chosen for Lincoln Square's first PaintWorks mural, a new effort to draw attention to areas outside the neighborhood's "square."
View Full Caption
DNAinfo/Patty Wetli
Franklin Riley has been chosen as the artist for the first PaintWorks mural.
View Full Caption
FultonMarket Gallery
Twitter Facebook Email More