HUMBOLDT PARK — The McCormick YMCA at the western end of the 606 has kicked off a $9.4 million expansion that will add amenities for its members such as two indoor swimming pools — and for users of the park system's elevated Bloomingdale Trail, long-desired public bathrooms.

The bathrooms are expected to open in fall of 2018 in conjunction with the expansion, officials said.

At a Tuesday groundbreaking ceremony, Steve Koch, a city deputy mayor, thanked the YMCA for adding the two unisex bathroom stalls, to be located just off the western trailhead and on the YMCA property at 1834 N. Lawndale Ave. in Humboldt Park.

Koch acknowledged that "one of the problems with the 606 that [the city] probably made," was not adding bathrooms.

"Happily, the Y is going to fix a mistake that is inadequate facilities. Health, in sometimes a more urgent sense, will be addressed here. I think it's a wonderful reflection of how the Y is a great neighbor," Koch said.

Koch was joined by CEO of the YMCA of Metropolitan Chicago Dick Malone; President and CEO of the Robert R. McCormick Foundation David Hiller;  26th Ward Ald. Roberto Maldonado; and children from the national YMCA's youth swimming program, who sang a song in celebration of the new pools.

"As the father of two competitive swimmers, I can say without a doubt that the new aquatic center will open a whole new world of opportunity for youth in our community," Maldonado said. The Humboldt Park alderman added, "Swimming is much more than winning medals. Swimming has a ripple effect that can change every aspect of your life."

The McCormick YMCA expansion will add a two-story, 13,000-square-foot addition that will house two indoor pools, two multipurpose rooms and a family locker room. The YMCA opened in 1967.

YMCA officials said that the expansion will provide youth and adults in the Logan Square, Hermosa, Humboldt Park and Wicker Park communities with much-needed, year-round access to pools and swimming lessons.

Last year, the YMCA of Metro Chicago provided over 7,200 swimming lessons to youth in the city and suburbs, including free swimming lessons for 320 CPS students at nine YMCA Community schools, made possible through a grant.

"We can celebrate the city's partnership with the Y for decades. ... The Y has been an extraordinary partner in the city's mission to make people as healthy as possible," Koch said.

Building two unisex restrooms for visitors at the western trailhead of the 606 — Chicago’s 2.7-mile long elevated park and trail system — was a requirement included in an ordinance introduced in May by Mayor Rahm Emanuel tied to the sale of city-owned land to the YMCA.

The deadline for building the bathrooms would be December 2018 under the ordinance, which was approved by the full City Council in May.

"At least two or three people per day, but probably more," Rodriguez told reporters after the groundbreaking. 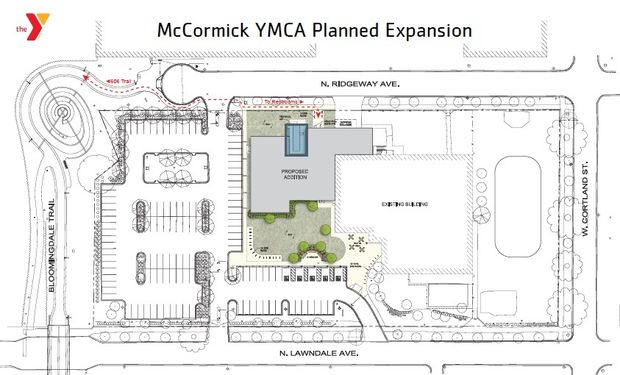