"It's about to get real, folks. How about we open to the public on Friday? Sound good?," the post reads.

Open Outcry will serve customers from 11 a.m.-11 p.m. weekdays and will have slightly later hours on weekends, said Brand, who walked away from his career in the futures market March 9, 2016, to buy O'Brien's Pub.

He shut down the modest tavern Oct. 30 with grand plans for a brewery that later evolved to include a restaurant. The end result is a 110-seat brewpub designed with reclaimed wood throughout and lit by vintage Edison lightbulbs.

Those seated at the bar look onto the brewing operation, including six stainless steel holding tanks previously outgrown by neighboring Horse Thief Hollow in Beverly.

The bar has a dozen tap handles as well as a special chilling system that allows Brand's homemade brews to be poured directly from the holding tanks. All of the beer names are associated with the owner's previous career working in Chicago's futures exchanges.

"The vision was creating a space for this neighborhood that was open, airy and married all these different materials I liked — wood, concrete and steel," Brand said.

He aimed to keep his beers interesting without being overwhelming, as Brand acknowledged that many beer drinkers in the area are loyal to popular macro-brews such as Miller Lite and Bud Light.

More varieties of beer will come as Open Outcry settles in, and seasonal brews can be expected. Here's a look at the first four beers that will be on tap:

Strike Price Wheat is an American wheat ale with a floral aroma from hop additions and malty sweetness. (5.5 percent alcohol by volume)

Open Interest IPA is an East Coast-style India pale ale that relies on an ample amount of oats to deliver a juicy, sweet complexion. A dry hop also allows the citrus bouquet to take center stage. (6.7 percent alcohol by volume)

Self Regulator is another East Coast-style IPA and similar to Open Interest. Again, there are plenty of grains used in this brew, and it's intended to look murky in the glass. (5 percent alcohol by volume) 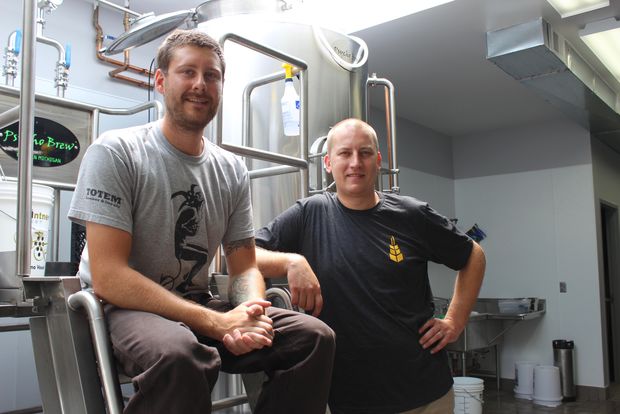 Will Golebiewski (left) and John Brand are the brewers at Open Outcry Brewing Co. in Morgan Park. The restaurant and brewery will have four homemade beers on tap when it opens and more as operations progress. [DNAinfo/Howard A. Ludwig]

Aside from the beer, the restaurant portion of Open Outcry also has unique features, including a garage door-style window designed to be opened when the weather cooperates and a 22-seat table for larger groups or to be shared.

"It will be social experiment to see how people in this neighborhood will react to sitting next to people they don't know, like in Manhattan or something," Brand said of the table made from wood pulled from the floor joists of a shuttered hardware store in Colfax, Ill.

Other tables are made to seat groups of four people.

Chef Cesar Lopez said his menu is designed to be paired with Brand's beers, including more than a dozen wood-fired pizzas. These Neapolitan-style pies will be different than others in the neighborhood both in terms of their method of cooking as well as the ingredients. 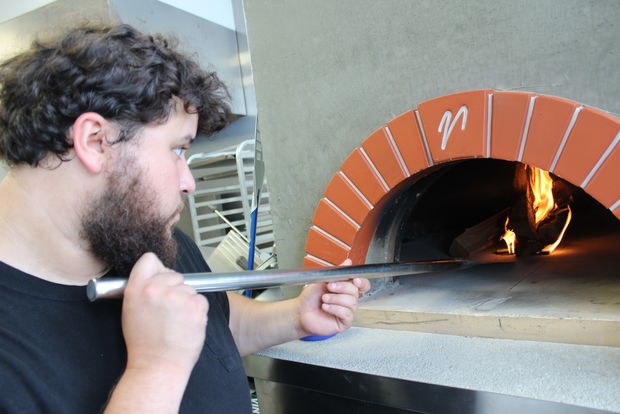 Chef Cesar Lopez said the wood-fired pizza oven at Open Outcry Brewing Co. will be used to make a variety of Neapolitan pizzas as well as some sandwiches and other items. [DNAinfo/Howard A. Ludwig]

For example, Lopez said the "white pizza" will feature a smoked gouda cheese sauce, topped with jalapenos, bacon and a blend of provolone and mozzarella cheeses. Other pizzas will feature a spicy marinara sauce and a crushed-tomato sauce, Lopez said.

The insanely hot oven also will produce a variety of toasty sandwiches. All the menu items are designed to be eaten without utensils, with the exception of several salads, Lopez said.

Customers will walk up to a mock food truck at Open Outcry to place their food orders. They will pay for their food right there and be given a number to take back to their table.

Once the food is ready, Open Outcry staff will deliver the food to the table, setting up a scenario where tipping is not required. That said, there will be waitstaff available to bring drinks to tables from the bar.

Waiters and waitresses dispatched from the bar will be encouraged to clear away finished food items, Lopez said.

"It's the same as if you went to a brewery that had a food truck parked outside," said Lopez, who said he briefly considered launching his own food truck before being hired by Open Outcry. 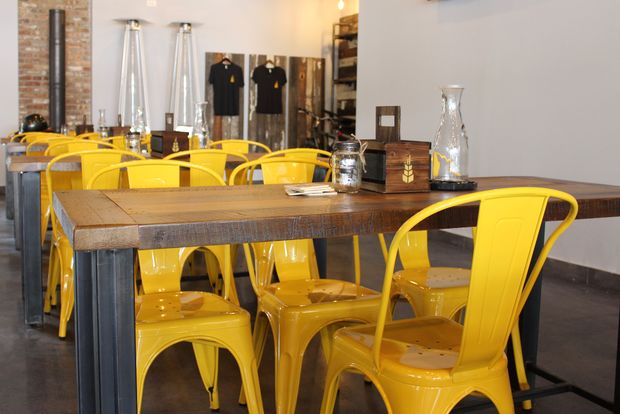 The interior of Open Outcry Brewing Co. features reclaimed wood tables, bright yellow chairs and an area where several board games will be available for patrons looking to pass the time. [DNAinfo/Howard A. Ludwig]

Brand thanked residents for their support last week, adding that there's been plenty of excitement about his brewery from the start. He hopes to exceed expectations and asked neighbors to be patient for just a few more days.