LINCOLN SQUARE — Traffic and parking were among the complaints neighbors aired at a community meeting earlier this week to discuss redevelopment plans for the shuttered Lawrence Avenue Sears. But the real elephant in the room was the impact a global phenomenon is having on local communities.

Call it the "Amazon effect."

As proposed, the Sears development would combine residences and businesses, with 59 apartments sitting atop 33,000 square feet of ground-floor retail.

The debate over how delivery trucks will service those to-be-determined businesses — through the alley, off side streets or via a loading zone on Lawrence — could be moot given that "retail is going to 'blank' in a basket," neighbor Tom Bourbulas said.

"This plan is predicated on retail," Bourbulas said. "Retailers are going bankrupt."

"Public storage, that's the best economic plan" for the location, he said. "But that's not the business I'm in."

Trandel initially lined up Binny's Beverage Depot to occupy the development's entire first floor, a deal that community members nixed due to the prospective liquor store's proximity to McPherson Elementary across the street.

In the absence of single large tenant, Trandel said he's now scrambling to secure multiple smaller businesses in the midst of what he called "really tricky" environment.

Brick-and-mortar operators are in survival mode. Rather than expanding, they're focusing on shoring up existing stores against competition from online outlets such as Amazon, he said.

"Everyone's waiting for the next shoe to drop," Trandel said.

A 2016 report by the Institute for Local Self Reliance on Amazon's impact on local retailers across the United States said that within five years, one-fifth of the country's $3.6 trillion retail market will have shifted online. Amazon is on track to capture two-thirds of that share, the report said.

The growth of the online giant is disrupting local tax bases as smaller businesses close, creating what the report calls an "existential threat to the vitality of cities."

Brick-and-mortar retailers create about 1 out of every 8 jobs, the report said. "If they are locally owned, they also generate a second tier of economic activity, as they spend some of their revenue with nearby suppliers and service providers, sending money flowing into numerous local paychecks," the authors write.

"Brick-and-mortar stores, particularly those that are locally owned and in walkable business districts, are also intimately linked with our own self-interest and how we experience our communities," the report added.

Amazon says it contributes to local economies through hiring and encouraging its distribution center to use area vendors. In Illinois, it works with 95,000 "authors, sellers and developers" and directly employs 7,000 people, the company says. It also contributes to charities through its AmazonSmile program. 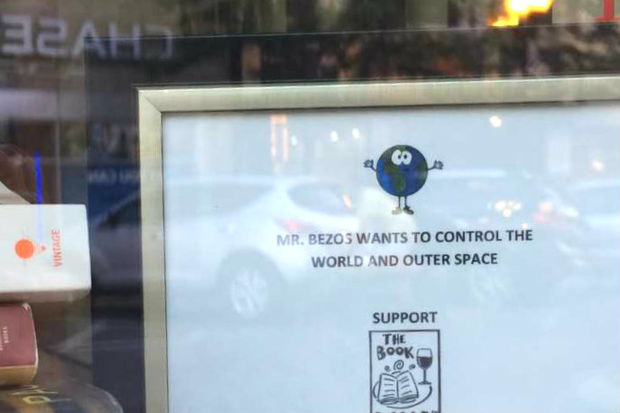 Anchored by Mariano's and LA Fitness, the streetscape has successfully attracted business such as Roots Pizza, the Sixth cocktail bar and Band of Bohemia brewpub, as well as a number of proposed developments, including the Sears site.

But the retail climate has shifted dramatically in those four years.

"Higher-end boutique-y places will do well, restaurants, hospitality," he said. "But the only way for that to work is if we have more people."

Which brings the conversation back to Sears.

The development, coupled with a mixed-use proposal for the nearby Chase Bank site, would add more than 150 apartments — a drop in the bucket compared with the 4,000 units the ward has lost since 2000, but still something, Pawar said.

The alderman said he will make a decision in a week on the project's proposal to convert one-way portions of Wolcott and Winchester to two-way, but aside from that contentious detail, "The project's going to get approved," he said.

The question now isn't so much "If they build it, will people come?" but "If people come, will they have anywhere to shop?"

"Every month this waits is really painful," Trandel said. 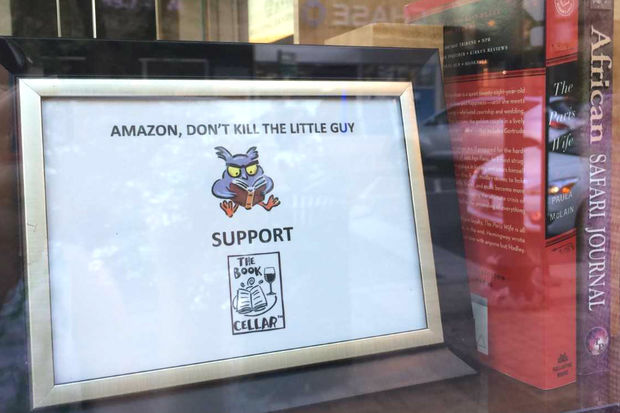 That other shoe Trandel was talking about? For some businesses, it's already landed with a thud.

Amazon sent shivers down the spines of Chicago's remaining independent booksellers when it opened a storefront in Lakeview in March.

"A mile and half from the Book Cellar — I can't wrap my head around it," said Steve Quick, owner of three jewelry stores, including a shop in Lincoln Square.

Quick promptly devised a showy signal of support for his Lincoln Square neighbor by turning his window display at the corner of Lincoln and Leland into a form of protest against Amazon and its founder Jeff Bezos.

(Quick said he has no connection to the Book Cellar other than being a customer who would "rather die" than order a book from Amazon.)

"Jeff Bezos is only days away from being the richest person in the world. He's killing all kinds of businesses," Quick said.

"Some people are already gone, some people can see what's on the horizon," Quick said of his mom-and-pop peers. "If it's not on your mind, you're not paying attention."

The response to the display has been overwhelmingly positive, with neighbors popping in just to say "right on," Quick said.

"Every once in a while you can stand up for something everyone believes in," he said.

Though his own business is holding its own against internet sellers — people still want the tactile experience of trying on jewelry — Quick said the larger societal issues at play affect everyone.

"I think this thing is happening to us all collectively," he said. "Amazon — it is very easy. But we're not realizing what we're losing." 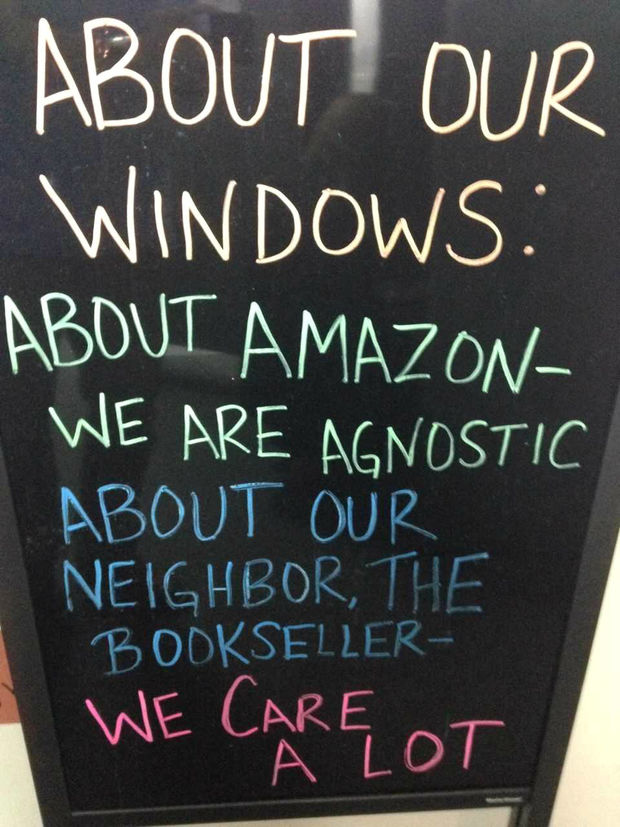