RAVENSWOOD — When Band of Bohemia's servers recommend that patrons "save room for dessert," they're not simply spouting a standard wait staff cliche — they're offering helpful advice.

You see, the Michelin-starred brewpub's Foie Gras-sicle is no trifling thing.

The highly unorthodox popsicle-in-name-only contains 2 ounces of foie gras — half the frozen treat's weight — and is coated in dark chocolate. To polish off such a richly decadent dessert at the end of one's meal calls for an iron stomach and a certain amount of preparation.

"It's funny to see [customers] struggle to put it down. Seriously, save room for dessert," said George Kovach, the restaurant's pastry chef.

Kovach developed the faux-fudgesicle in the spring, to coincide with an event celebrating the James Beard Awards.

Like some sort of Good Humor man gone rogue, Kovach already had been testing versions of a foie gras choco taco when Band of Bohemia co-owner Craig Sindelar approached him to come up with a play on a chocolate-covered banana for the Beard bash.

Kovach's initial idea was to create a foie gras "banana" dipped in chocolate, and the idea evolved from there.

The complexity of the three-day process required to produce just 40 foie-sicles explains the $14 cost.

On day one, Kovach cures a pair of foie gras loaves — duck liver that has been enlarged through force feeding — for 24 hours in a concoction that includes dates, oranges, sugar, peppercorn and a "laundry list" of herbs.

Then he buries bananas in the coals of the restaurant's wood-burning grill to achieve a roasted flavor. The cured foie and the baked bananas are blended to create a mousse, which is frozen in molds before being covered in Valrhona 68 percent dark chocolate. A dusting of an almond-coconut crumb adds the finishing touch.

The foie-sicle is only available during dinner, and Band of Bohemia nearly goes through an entire batch every weekend. In fact, the dessert has proven so popular, Kovach aims to keep it on the menu year-round, with adjustments for seasonal ingredients. 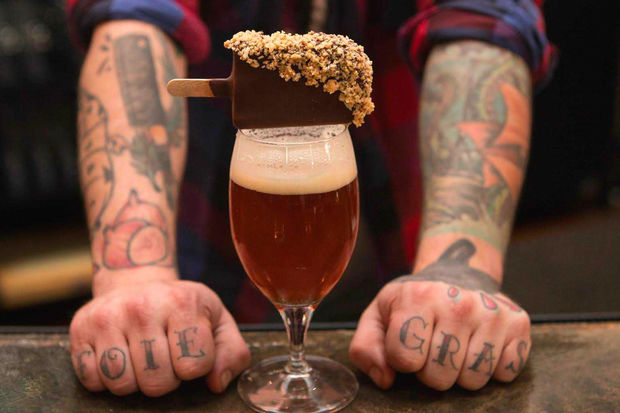 Though Chicago and foie gras have a checkered history — the city banned foie gras from 2006 to 2008, a dust-up definitively chronicled by former Tribune reporter Mark Caro in "The Foie Gras Wars" —  Kovach said his aim is not to push buttons but rather to push the boundaries of what's considered dessert.

"Nine times out of 10, dessert is a letdown. I really wish pastry chefs were experimenting more with different things — every spring it's rhubarb desserts," he said.

A savory chef by training, Kovach brings a different sensibility to Band of Bohemia's pastry program, creating, among other items, a parsnip dessert.

Given that the restaurant is a brewery as well, and that the food menu is specifically designed to pair with the beer menu, Kovach also is experimenting with ways to "have fun with all these grains."

He credits Band of Bohemia's adventurous eaters for their willingness to follow his muse, even when it leads down a wildly unconventional path.

For those who balk at the foie-sicle as a duck-livered bridge too far, Kovach simply says, "If you don't like it, you don't have to eat it."