A big outdoor hockey league that once counted Chicago Blackhawks Duncan Keith and Brandon Saad among its players debuted Sunday at a new rink near Balbo and Columbus avenues after getting kicked out of North Avenue Beach two years ago.

LTS Chicago, which has run sand volleyball leagues for years in Grant Park and other city locales, will open for a new season July 11 next to the roller rink.

And instructors will offer new, free classes on a variety of workouts ranging from Tai Chi to yoga and even parkour.

Temporary pullup bars and other low-tech exercise equipment will be installed soon in the park, which is testing out activities before Lollapalooza as it looks to eventually build a large "health park," or free outdoor gym.

"Grant Park has to be a model for neighborhoods so people see this and take it to neighborhoods," said Bob O'Neill, president of the Grant Park Conservancy. 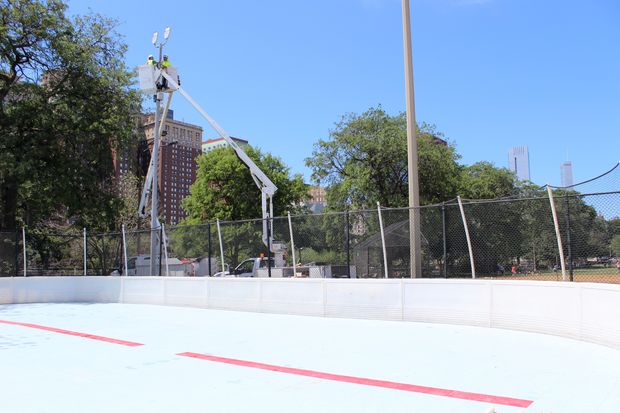 The rink getting set up Friday in Grant Park. [All photos by DNAinfo/David Matthews]

The new rink and exercise equipment is taking the place of an asphalt lot that was the site of Grant Park's old skate park before the skate park moved closer to Roosevelt Road in 2014.

Registration is still open for the LTS sand volleyball leagues, which will play games every Tuesday, Wednesday and Thursday, said Mark Biery, LTS' partner and cofounder.

The exercise classes will be led by instructors from the University of Illinois-Chicago and other professionals, O'Neill said.

The new equipment, including pullup bars, marks a trial run for the park before it further pursues a "health park" the Grant Park Conservancy proposed in 2015. O'Neill has championed the health park as an effective use for a paved area that has been vacant since the skate park left two years ago, but some neighbors are worried it will effectively privatize a piece of the park's landscape.

The equipment will be gone by the time Lollapalooza takes over Grant Park starting Aug. 3.

"We're not going to sit there with all that hardscape," O'Neill said. "It’s better we don’t wait and start doing this and see what people like and don’t like." 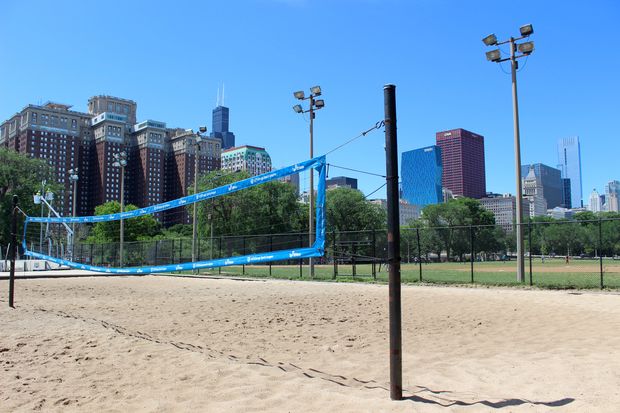 Roller Hockey Could Be Coming To Grant Park