LINCOLN SQUARE — Staff and students at Waters Elementary have been keeping a close watch on their waste lines in recent months.

As part of a bid for a grant from the Environmental Research and Education Foundation, parent Julie Moore has been measuring the school's lunchroom trash and the weight loss is impressive.

Her data shows that just 13 percent of Waters' lunchroom waste, by weight, winds up in a landfill, with the remainder otherwise recycled or composted.

By contrast, studies conducted by various school districts across the U.S. estimate 30 percent to 50 percent of lunchroom food alone is trashed, not including packaging.

Pete Leki, director of the ecology program at Waters, 4540 N. Campbell Ave., said he was pleased with but not surprised by Moore's numbers.

"It's so in our blood," said Leki, who's been leading the recycling and composting charge at Waters since the 1990s.

Moore, mom to a current seventh-grader and a 2016 Waters grad, concurred.

"My oldest daughter started recycling in pre-K," Moore said. "It's just part of who she is."

For such a successful program, the waste diversion process at Waters is uncommonly simple.

At the signal that their lunch period is over, students at Waters pick up their food trays and file out of the cafeteria one by one, stopping at a series of sorting stations before they head back to class.

Liquids are poured into a sink, milk cartons and water bottles are placed into a recycling bin, fruit and vegetable scraps go into a garden compost receptacle, plastic utensils and snack bags get tossed into trash, and pretty much everything else winds up in a bin headed to a commercial composting facility.

"It's completely doable," Leki said. "Custodians have to be helpful, the principal has to be supportive, but it totally runs on its own."

The commercial composting aspect, now in its second year, has made the biggest impact, accounting for 48 percent of Waters' lunchroom waste diversion, according to Moore's data.

The school is one of 10 within Chicago Public Schools chosen to pilot commercial compost, which includes lunch trays made of compostable material instead of not-even-recyclable styrofoam.

Waters goes through 500-600 of the trays per day, an amount the school's garden compost system, as comparatively substantial as it is, could in no way handle, Leki said.

Fruit and vegetable scraps, which the school and its volunteers toil mightily to turn into soil for Waters vegetable beds and flower gardens, already amount to between four and five tons a year, he said.

Waters has been able to justify compost collection by simultaneously reducing costs associated with trash hauling, he said.

"That's what should be in landfills — dribs and drabs," Leki said.

He credited the school's student recycling captains for promoting a tone that trickles down — and up.

The captains, chosen by their teachers and trained in the fall of each school year, collect recycling from every classroom and office, and submit forms to Leki that rate the quality of the items in terms of contaminants and state the action taken to correct the problem.

"They do this day in and day out, week in and week out," he said.

No one is immune from the captains' critical eye.

Moore shared a story of catching Principal Titia Crespo combing through her recycling bin to make sure each piece of paper had been used on both sides before being tossed, for fear of otherwise having her  "grade" lowered by the recycling captains.

Ecology has become so ingrained among Waters staff, students and parents, members of the school's community fundraise annually to retain the program, even in the face of CPS budget cuts.

"I feel so lucky to have Pete Leki here and an administration that supports this," Moore said. "People are so dedicated to keeping this going." 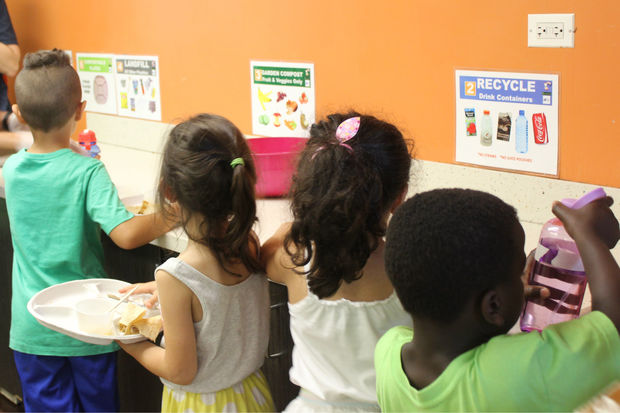 Students stop at sorting stations as they file out of the cafeteria. [All photos DNAinfo/Patty Wetli] 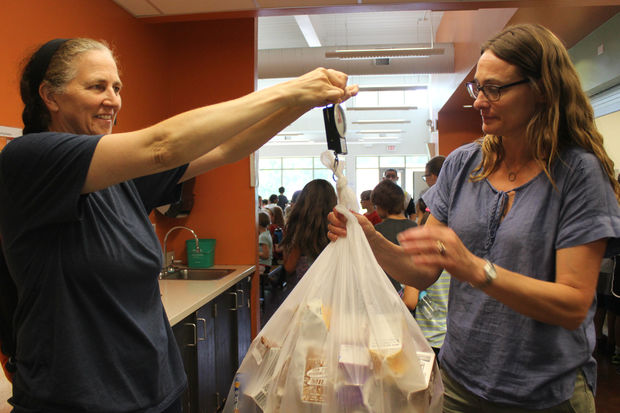 Julie Moore and Amy Yoder weigh a bag of recyclables. 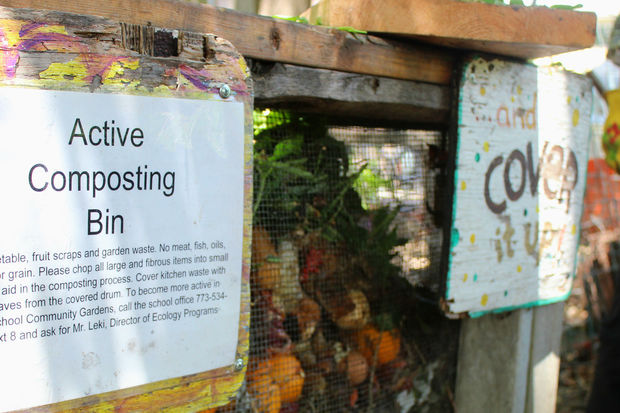 Lunchroom fruit and vegetable scraps are destined for the school's garden compost. 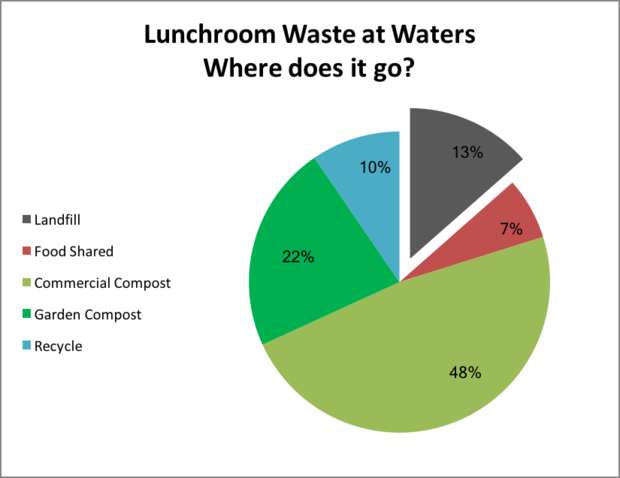