NORTH CENTER — Pockets owner David Litchman is washing his hands of the chain's North Center location in a squabble with the city over a sink.

The Pockets at 4301 N. Lincoln Ave. was temporarily shut down June 9 by the Department of Public Health over a hand sink violation, a closure that will become permanent, Litchman said.

At issue: During a routine inspection in November, Pockets was ticketed for not having a hand sink in the restaurant's dishwashing area, a requirement that was added to the city's rules and regulations in 2014.

Litchman was given a grace period to add the sink, but the equipment still hadn't been installed upon re-inspection in June, at which point the violation was escalated from "minor" to "major," and the restaurant's license was suspended, said Caitlin Polochak, spokeswoman for the Department of Public Health.

In a note posted on Facebook and taped to the restaurant's door, Litchman laid the blame for the closure at the city's feet: "The Health Department in their infinite wisdom decided after 14 years that we needed a hand sink in an area that they once said we did not."

In an email to DNAinfo, Litchman reiterated his frustration over the violation, saying the restaurant "was built from scratch and received approval from [the] health department 14 years ago and for the last 13 years we had no issues. Recent inspection they said we now need to add another hand sink."

New rules are always being added to the city's code, and restaurants are informed of the changes and are expected to comply within a reasonable time span, Polochak said.

Litchman, who founded the Pockets chain of healthy fast-food eateries in 1989, has opted to throw in the towel on the location rather than add the sink.

"Running a successful restaurant is difficult enough, and with the high property taxes and higher minimum wage, we don't make any money. So I will not be reopening," he said.

The Pockets at 3001 N. Lincoln Ave. is now managing pickups and deliveries formerly handled by the North Center shop. 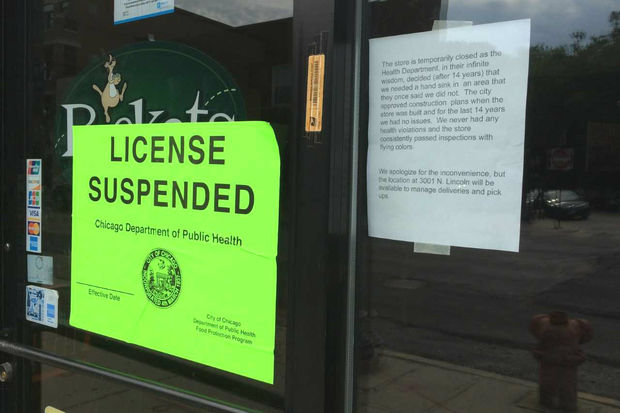