Monastero's To Be Demolished, Replaced By 3-Story Church Under Proposal

SAUGANASH — A three-story, 55,000-square-foot church would be built in place of Monastero's Ristorante & Banquets, 3935 Devon Ave., under a plan presented Wednesday.

The Monastero family announced in April that they'd accepted an offer from Elim Romanian Pentacostal Church to buy the property, ending their 55-year run in Sauganash. The restaurant will serve its last customer on Nov. 18, they said.

The Rev. Cristian Ionescu, the church's head pastor, had earlier suggested that the new owners would renovate the existing restaurant, a pair of one-story buildings separated by a drive-in parking lot. But on Wednesday he unveiled the design for a new building, with more than three times the floor space and twice the parking area as the current site.

The sloped gray building would include 10 classrooms and a sanctuary large enough for nearly 1,000 congregants, Ionescu said. If Ald. Margaret Laurino (39th) approves a zoning change allowing the project to move forward, construction could begin as soon as spring 2018, he added.

"We're working on a wonderful design, and we think you'll be proud to drive by and see this church being built in your neighborhood," the pastor told neighbors Wednesday.

The church's 900-member congregation has "outgrown" its current site at 4850 N. Bernard St., according to church advisor Cristian Gansari. The move would bring the church into the middle of a large Romanian community in Sauganash, placing it within walking distance of many congregants, church leaders said.

Those who live farther would be able to park in a 169-space lot, including 43 spaces in place of M&M Landscaping, which sits just east of the restaurant and whose property was also acquired by the church. The plan calls to vacate the driveway that Monastero's uses for valet service, instead directing cars through two public alleys on either side of the building.

Some attendees at Wednesday's meeting, like Peterson Park Improvement Association president Sylvia Asslani, saw that change as a recipe for heavy traffic backups on Sundays, she said.

"If you have those two narrow alleys and people are lining up to come into the parking lot, I foresee a lot of congestion," Asllani said. "We welcome [the church] into the community, but they're going to have to sit down and evaluate their traffic patterns a bit more, I think." 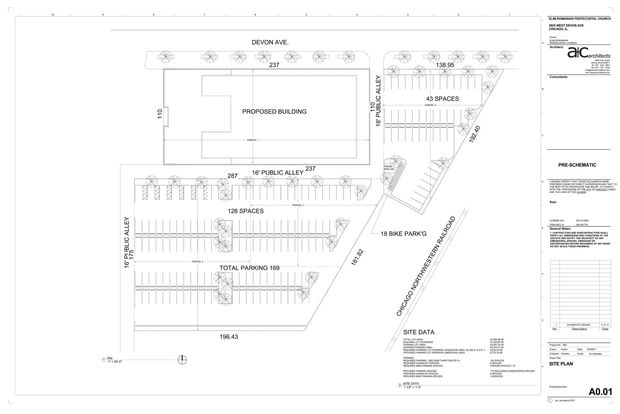 The site plan includes a 169-space parking lot behind the building. [A+C Architects]

But Paul Kolpak, an attorney representing the church, said the new system would improve upon the restaurant's parking scheme.

"As it is now, whenever you have a special event, cars have to wait while the valet guys go back and forth to the lot," Kolpak said. "We think it's safer this way."

Plus, Ionescu added, the church would deploy parking attendants on Sundays to keep cars from lining up in the alleys.

Laurino expressed broad support for the proposal at the end of the meeting, but she asked church leaders to "come to the table and come back with some better solutions" to ease traffic before she signs off on the zoning change. 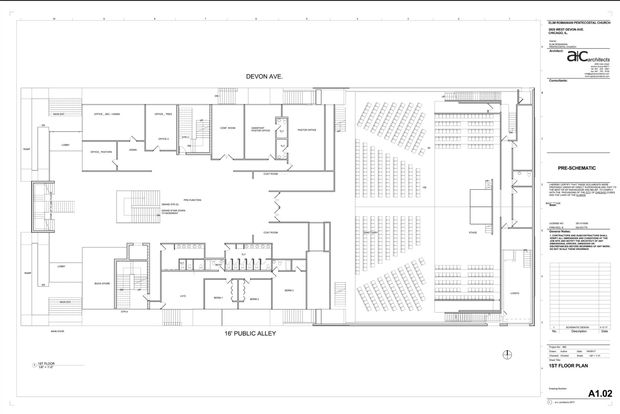 The church would include 10 classrooms and a sanctuary with nearly 1,000 seats. [A+C Architects]