Want A Millennium Park Garden Look At Home? Tips From The Planter-In-Chief

DOWNTOWN — When it opened in 2004, Lurie Garden in Millennium Park represented a departure from the more formal manicured landscapes of Chicago's other premier public gardens.

Designed by Dutchman Piet Oudolf, who also created the plan for New York City's much lauded High Line, Lurie Garden is not only wilder and more naturalistic in its layout, but it emphasizes the use of perennials, particularly those native to the Midwest.

No rhododendrons, roses, snapdragons or impatiens for Oudolf. Instead, Lurie is awash in prairie smoke, beardtongue, bee balm and coneflowers. 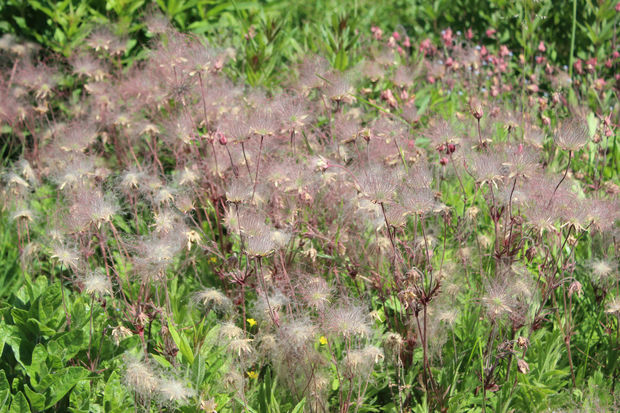 Prairie Smoke is one of the first plants to bloom in the spring. Its pink buds open to reveal feathery clusters. [All photos DNAinfo/Patty Wetli]

On Saturday, home gardeners will have an opportunity to buy a piece of the Lurie, at the garden's annual plant sale, 10 a.m. to 2 p.m. Because garden centers haven't entirely caught up with Oudolf, the plant sale is one of the few places where gardeners can shop a wide selection of the native species that grow in abundance at Lurie.

In advance of the sale, DNAinfo chatted with Lurie Garden's head horticulturalist, Laura Ekasetya, who's been the guardian of Oudolf's plan since 2011 and was named the garden's director in 2017. 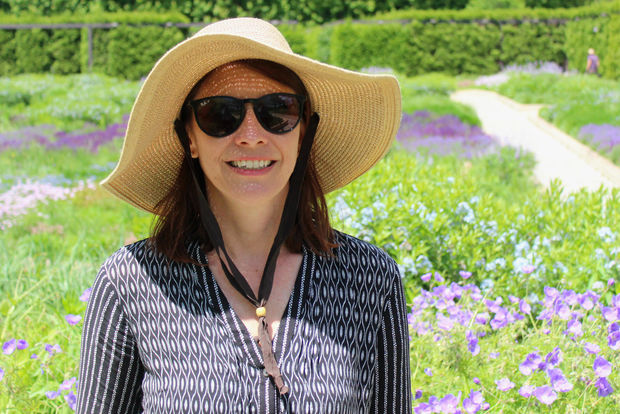 Oudolf's approach to landscaping, once considered something of an oddity, has been embraced by many of the city's amateur gardeners, from the parkways of Pullman to the backyards of Portage Park.

Ekasetya shared her advice on the best ways to achieve the "Lurie look" at home.

Like all well-planned gardens, Lurie is composed of complementary and contrasting plants of varying height, texture and bloom times. The garden's color palette, however, is notably limited, skewing heavily toward Oudolf's preferred "calming" shades of pink, purple and blue. Splashes of white, which are visible at night, are also an important feature, given that the garden is open daily until 11 p.m.

Pressed to choose five plants that would form an excellent base for a home version of Lurie, Ekasetya named:

• Allium "Summer Beauty" — This tough, versatile plant provides four seasons of interest, with glossy green foliage and clusters of lilac-colored blooms in spring and summer, and golden stalks in fall and winter.

• Mountain Mint — Not nearly as invasive as other members of the mint family, Mountain Mint attracts the widest variety of pollinators, Ekasetya said.

• Eastern Bee Balm — The colorful blooms are a magnet for hummingbirds and butterflies. They also attract hawk moths, which are nicknamed "hummingbird moths" because they beat their wings so quickly. Bonus, this plant will tolerate partial shade.

• Prairie Dropseed — This bunch-type grass requires "no maintenance at all," Ekasetya said, and its "long hair" also smothers weeds. Birds rely on its seeds for food, particularly in the winter.

• Pale Coneflower — When the blooms of spring and early summer are spent, coneflowers step into the spotlight. 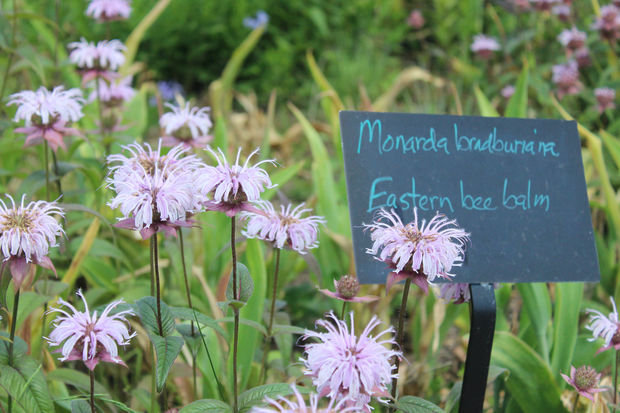 Aside from the paths that staff use for maintenance, there's no mulch to be found in Lurie Garden. Weeds are controlled instead by the perennials' dense planting, something Ekasetya advises if it fits with a gardener's budget.

Grouping multiples of the same plant — as opposed to the one-of-everything approach — not only packs a greater visual punch but it's an insurance policy against an individual plant's failure to thrive, she said.

Know When To Go Native, And When Not

The wave of blue and purple that ripples through Lurie Garden in the spring owes its vibrant color to varieties of salvia (aka, meadow sage), which Oudolf deployed to evoke a river, Ekasetya said.

Though it's one of the garden's signature plants, salvia isn't a native species, and that's A-OK, Ekasetya said.

The point, after all, isn't to mimic the historic appearance of Chicago's lakefront, she said.

"If we were to go back, it would be marsh land — we're not going to recreate that," said Ekasetya.

Rather, Oudolf's design provides a guide to the types of benefits gardeners should look for when a plant catches their eye.

Salvia, for example, isn't just beautiful, it's also extremely drought tolerant, meaning it doesn't require constant watering. The plant is also an excellent source of nectar for bees, which aligns with Lurie's mission to be pollinator-friendly. 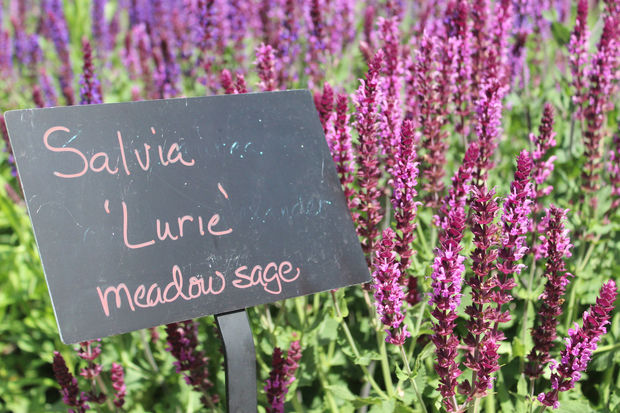 Lurie Garden has its own variety of salvia — a variegated pink and purple — which will be for sale Saturday.

Scottish Lovage is another recent favorite of Ekasetya's. As its name suggests, the plant is an immigrant, but tiny native bees adore it and it performs exceedingly well along the Lurie's limestone wall, where it gets "cooked," she said.

Hostas, which Ekasetya said can be overused in gardens, are another low maintenance non-native that, when used judiciously, lend interesting texture to flower beds and are an all-purpose utility player for shade gardens.

Don't Be A Hoarder 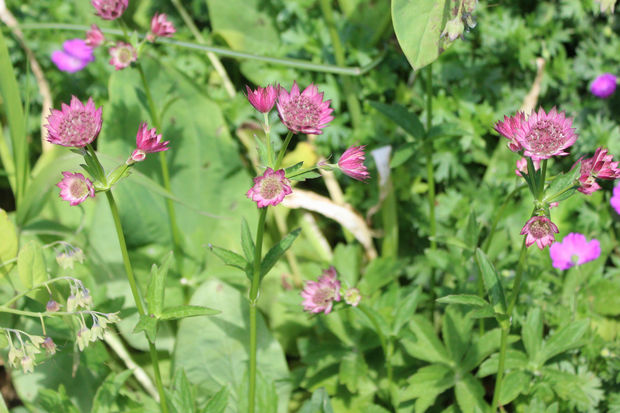 A rare surviving Masterwort, original to Piet Oudolf's Lurie Garden design. The plant was less successful in practice than theory.

Lurie Garden is a living creature, and as such it's constantly evolving.

She encourages all gardeners to do the same.

If a plant isn't working — perhaps it's become invasive or is unexpectedly shading a neighboring sun lover — pull it, Ekasetya said.

Perhaps Oudolf's greatest contribution to landscaping is his focus on perennials.

Annuals may seem cheaper in the short term and provide an instant fix, but they require so much water  — to say nothing of their replacement from one year to the next — that they're costlier in the long run, Ekasetya said.

Roses are also antithetical to concepts promoted by Lurie Garden.

They've been so over-cultivated at this point, "they provide nothing for wildlife — they have no nectar for bees," Ekasetya said. "And they're too much work."

What To Know Before You Go To The Plant Sale

Lurie Garden's main entrance is off Monroe Street, across from the Art Institute's Modern Wing.

Bring your own bags or boxes to transport your plant sale purchases. Costs range from $3-$5 for plants in pint-sized containers to $10 to $12 for gallons. For a list of plants that will be available at the sale, click here.

Honey from the garden's beehives will also be sold, $10 for a six-ounce jar. The honey was hive-aged over the winter and has an almost caramel flavor, Ekasetya said.

Guided walks in Lurie Garden take place each Thursday, Friday, and Sunday from May through September. Click here for more information. 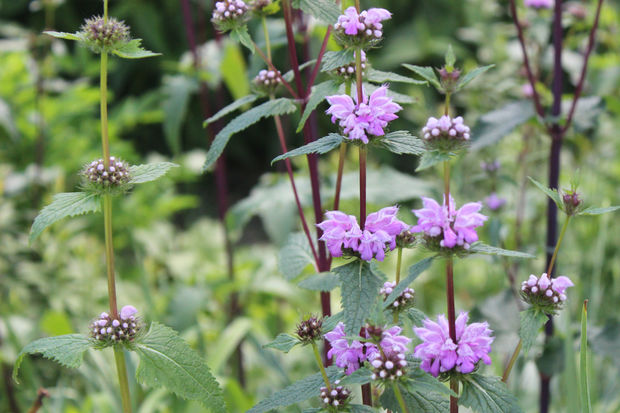 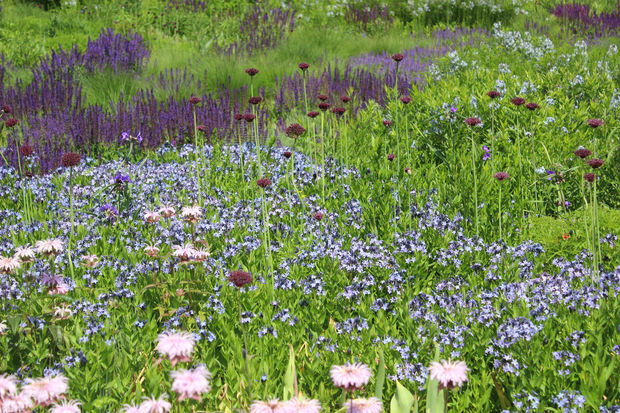 Lurie Garden's color palette is a "calming" mix of pink, blue and purple. 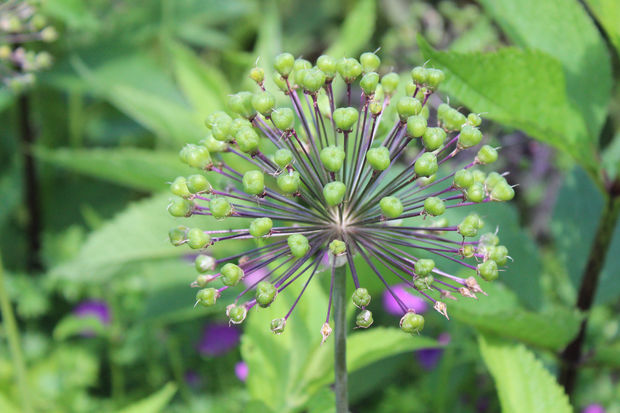 Lurie Garden's design gets visitors to think beyond the bloom and consider the interest provided by a plant's seeds and foliage.