MAYFAIR — Ald. Margaret Laurino (39th) announced an Aug. 12 opening date for the final phase of the North Branch Trail extension at a workshop she co-hosted with the Active Transportation Alliance and city planners Thursday.

Officials also reassured neighbors on the stalled plan to redevelop the long-defunct Weber Spur train line, which remains stuck in the negotiation phase nearly two years after Laurino announced the city's intention to acquire it from the Union Pacific rail line.

"I think we're making some progress with Union Pacific, but railroads can be a bit ... different," Laurino said. "It's a private entity, it was established in the 1800s, and they have a lot of laws around safety that make it challenging when you're talking about purchases — but I feel confident."

The city hit some of the same stumbling blocks before the redevelopment of the 606 Bloomingdale Trail, according to Keith Privett, a coordinator with the city's transportation department.

"The railroads are very cautious, which is very good for safety, but very bad for our development of the trail," Privett told the roughly 50 attendees at the workshop. "These things do take time, but it'll be good when we get there."

The Weber Spur bike path would begin at Devon Avenue, linking up with a trail already being paved in suburban Lincolnwood. It would head southwest to Peterson Avenue in Sauganash, where it would link up with the Sauganash Trail. From there, the trail would cut through the LaBagh Woods and feed into Elston Avenue in Mayfair, which offers cyclists a continuous path to Downtown.

The railroad already let the Forest Preserves pave the North Branch Trail where it crosses the Weber Spur in the Labagh Woods, sending "a message that they're going to be willing to work with us the rest of the way," Laurino said. 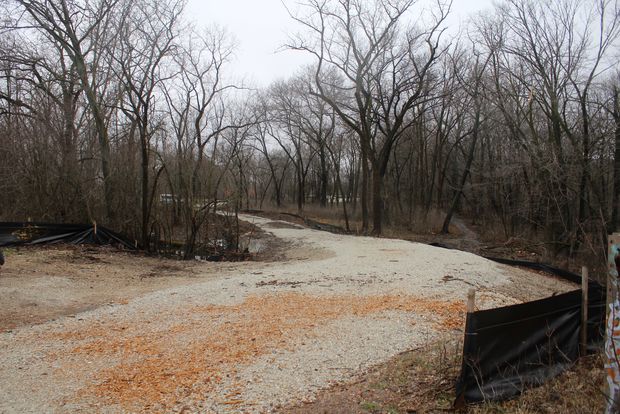 A section of the Weber Spur trail in the LaBagh Woods, near its intersection with the soon-to-open North Branch Trail extension [DNAinfo/Alex Nitkin]

Officials in September cut the ribbon on the 1.8-mile first stage of the extension, which begins in downtown Edgebrook and ends near the Forest Glen Metra station. The shorter second stage will cut a path underneath Cicero Avenue and the Edens Expy., ultimately extending the trail to the intersection of Foster and Kostner avenues.

Both the Weber Spur and the North Branch Trail extensions rely on millions of dollars in federal grant money.

President Donald Trump has threatened to cut funding to Chicago as a punishment for its "sanctuary city" status, but Rep. Mike Quigley (D-5th) has vowed that Congress will keep the infrastructure money flowing.

Neighbors spent about an hour on Thursday huddled over maps with alliance leaders and city officials, brainstorming ways to improve bike access in what's already one of the most cyclist-friendly corners of the city.

• Building a bike path along the North Branch of the Chicago River between Pulaski Road and River Park, 5100 N. Francisco Ave., to smooth out a "bottleneck" of cyclists in Albany Park

• Paint bike paths along the half-mile stretch of Pulaski between Foster and Bryn Mawr avenues, where it bisects the Bohemian National Cemetery 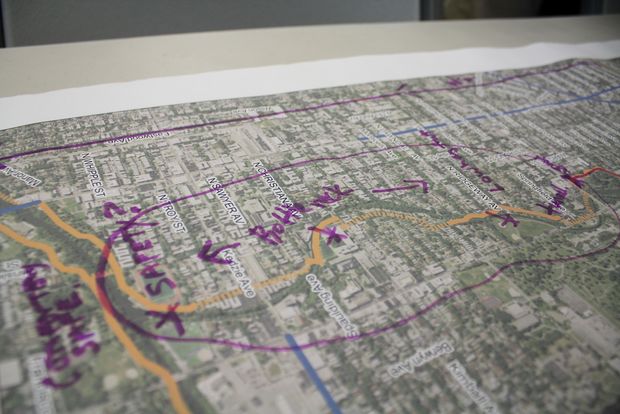 Attendees at Thursday's workshop adorned maps with potential "challenges" and "opportunities" for cyclists on the Northwest Side. [DNAinfo/Alex Nitkin]