LINCOLN SQUARE — Before there was Chance the Rapper, there was Dan Jorndt.

If the name doesn't ring a bell, that's kind of how Jorndt likes it.

Back in 1999, when he was CEO of Walgreens — the first person outside the Walgreen family to hold the title — the now retired Jorndt pledged $1 million to Chicago Public Schools, specifying that the funds be directed to his alma mater, Amundsen High School.

The announcement of the donation made quite a splash at the time, notable as the largest gift ever to a single CPS school. And then attention faded.

Dan's brothers George and Tom also graduated from the high school, but the family's ties to Amundsen run even deeper. Lou, the Jorndt patriarch, was a phys ed teacher and football and wrestling coach at the school.

Jorndt Field, the school's football stadium in adjacent Winnemac Park, was dedicated to Lou in 2004 after a $1.2 million donation from the family. 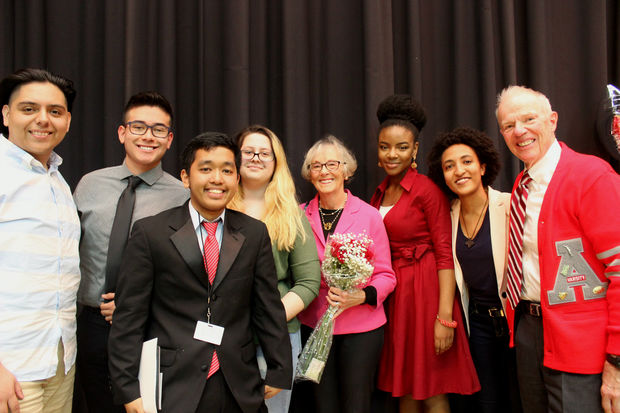 On Monday, the couple paid their annual visit to the Damen Avenue campus to hand out the Jorndt Joy of Teaching awards to three Amundsen faculty members and the Joy of Learning scholarships to six graduating seniors.

The all-school assembly was also attended by CPS CEO Forrest Claypool, who said, "It is precisely at times like these that we need benefactors like the Jorndts."

George Chavez, who's heading to Eastern Illinois University in the fall, was the first student called to the podium by Jorndt, where he was surprised in the best possible way.

If students maintain a "B" average in college, "We'll send you another check," sophomore, junior and senior years, said Jorndt, further sweetening the pot.

"Words can not describe how grateful I am," scholarship recipient Bolu Ajimoti said.

The teen, who plans to enroll at the University of Illinois, said the Jorndts made students feel "there are people out there who truly want the best for us."

As she accepted her scholarship, Loyola-bound Yalemzewod Enqubahry, a member of Amundsen's Starry Chicago team, told the Jorndts: "Without both of you, many students wouldn't believe a college education was affordable."

Noemer Joseph Palomares, who has his sights set on someday running a hedge fund, vowed to the Jorndts that "your investment in me will have a greater return than the S&P and Dow combined."

Of the six recipients, all but Chavez are immigrants, hailing from countries including Sudan, Nigeria, Romania and the Philippines.

Diego Vargas Buislay moved to Chicago from Guatemala in 2014 and managed to make the honor roll all three years at Amundsen.

That's precisely the kind of grit and determination the Jorndts want to reward.

"Most of these kids, they come here, step off the plane or the boat, and what do they see? Opportunity," Jorndt said.

"When you hear these students' life stories, if your heart isn't in your throat, you're not breathing," he said.

The Jorndts also presented $10,000 to Principal Anna Pavichevich, to spend where it's needed most.

"I am left without a new way to thank Dan and Pat Jorndt for their ongoing love and support for all things Viking," said Pavichevich, who was shocked to discover the Jorndts had doubled their usual gift to the principal.

In the early years of the Jorndts' involvement, Amundsen's reputation had declined from its heydays in the '50s and '60s — the graduation rate had dropped below 50 percent and CPS had placed the school on probation. The Jorndts took a chance that their investment could spur students and teachers to greater achievement.

That bet has paid off, with the school now not only off probation but attaining the second-highest performance level by CPS.

"Amundsen continues to set the example here on the North Side for what a neighborhood school can be," Claypool said. 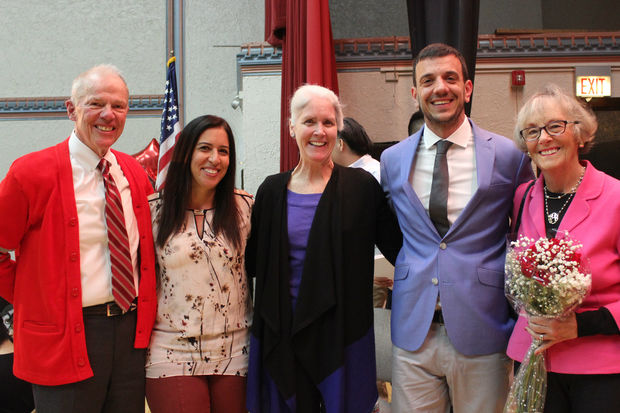 Recognizing the vital role educators play in a school's success, the Jorndts' Joy of Teaching award is as important to the couple as the students' scholarships.

Both of Dan's brothers pursued careers in higher education and the Jorndts' two daughters are teachers (their son owns the Bitter Pops taproom and beer shop in Lakeview).

"Teaching is a higher calling," Jorndt said. "It's frustrating, it's aggravating ... it's also very rewarding."

For Jorndt, who climbed his way up from pharmacist to CEO, giving students the opportunity to pursue their dreams is the best way to pay it forward.

"We've been very fortunate in our lives," he said. "We just believe in helping children in need, particularly with their education."