The CTA will have its work cut out as it seeks to redevelop sites near the planned Belmont flyover in the next decade as neighbors push for a wide variety of priorities.

"Keep it queer!" one neighbor wrote on a Post-It note. "Historic preservation is paramount!" another exclaimed.

After asking neighbors for input in the first of several meetings last week, the CTA will create a preliminary report from the survey data. The process will repeat from 6 to 8 p.m. Thursday for ideas on redevelopment near the Red and Purple "L" line stations at Lawrence, Argyle, Berwyn and Bryn Mawr at Broadway Armory Park, 5917 N. Broadway.

Based on an informal review of responses from the Lakeview meeting, neighbors gravitated toward a few specific concepts: adding affordable and diverse housing, retaining historical buildings and creating pedestrian friendly streetscapes with traditional architecture and small businesses.

Here's what else the forum revealed about the Lakeview redevelopment mindset:

Southport's got the Low-Line Plaza and Wrigley Field's triangle-shaped plaza already is making a name for itself weeks after opening.

Neighbors wrote that a plaza on Belmont Avenue would "serve as [the] heart of Belmont strip" and become a gathering place for events like farmers markets or the Belmont-Sheffield Music Festival.

One possible area for such development is the patch of gravel to the east of the Belmont "L" station, left abandoned and poorly maintained, neighbors have said over the years.

Residents of the 3200 block of North Wilton Avenue have been staring down that vacant lot for almost a decade.

No one wants to repeat that experience, so neighbors are asking that vacant lots become sites for temporary art installations or murals in the interim.

Even under the train lines, neighbors envision having public art or open space like a park to beautify what could otherwise be an eyesore.

When the Low-Line plaza was unveiled in July 2016, part of the ribbon-cutting festivities included temporary murals from local artists.

And, after all, the CTA is no stranger to beautifying its property with some public art. 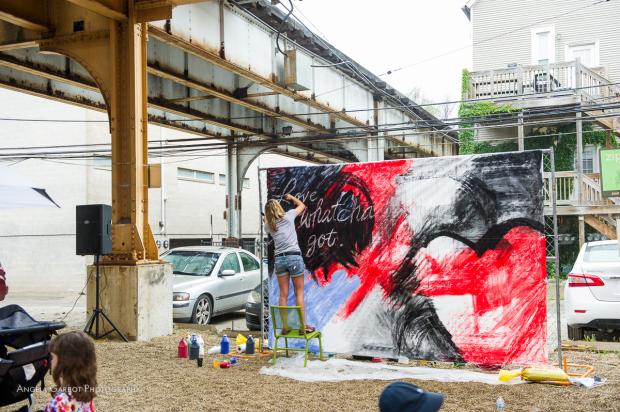 This will come as no surprise to those who attend neighborhood group meetings, where residents have long preferred traditional buildings over newfangled designs.

Back in 2013, what is now the Lakeview 3200 building at Clark and Belmont was initially proposed as a 10-story glass tower until neighbors voiced their opposition.

In February, developers similarly promised to scale back contemporary designs for the Herdegen Funeral Home at Southport, Lincoln and Wellington.

At the CTA forum, people criticized examples of modern architecture as "too modern" and clashing with existing aesthetics.

Instead, brick facades with more traditional elements found around Chicago were held up as "great" examples.

4. Historic preservation is a must

Quite a few historic buildings in Lakeview are undergoing massive changes.

The former site of the Alley is set to become a seven-story mixed-use building that will preserve the historic terra cotta facade of what was once the Clearmont Theater. At Broadway and Sheridan, the "eagles building" has been demolished, but developers promised to save the white terra cotta eagles for reuse.

So it stands to reason that neighbors want to preserve other notable buildings in a community with a century of history.

There are 16 buildings and a handful of vacant lots that the CTA needed to acquire for the Belmont flyover. On average, the buildings are 116 years old, with the oldest at 3328 N. Clark St. — an abandoned structure behind Jimmy John's — built around 1874, three years after the Great Chicago Fire. 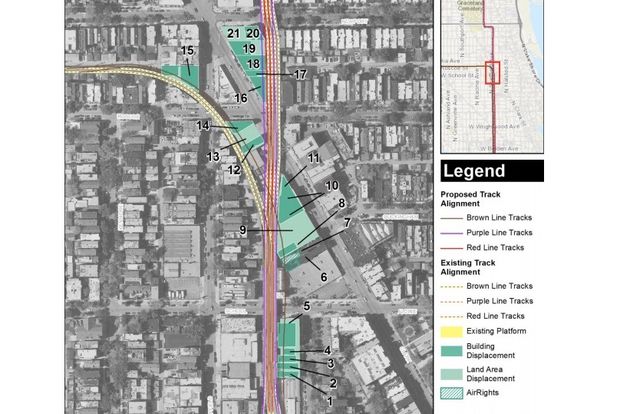 The CTA shared a list of properties it planned to acquire in 2015 to make way for the Belmont flyover. The 16 dark green properties include buildings that will be displaced. [Provided/CTA]

But not all those buildings are considered historically significant. The mixed-use masonry structure at 3406 N. Clark St. underwent renovations in the last few years before it became home of Toppers Pizza and Chicago Primal Gym.

Only two of the 16 structures have potentially significant historic features: the Vautravers apartment building at 947-49 W. Newport Ave. and the Wilcox Co. building at 3415-19 N. Clark St., home of Beer on Clark and Clark Street Beach, which was recently renamed Booze Next Door.

5. Affordable housing is a major priority

Chicago's Office of the Inspector General said in March that more should be done to promote affordable housing in "high opportunity" areas of the city.

And to some Lakeview residents, that starts at home.

Neighbors want affordable and accessible housing with a diverse stock of apartments in different sizes and prices. Respondents at last week's meeting emphasized a need for housing for seniors, people with disabilities and low-income families.

As of 2015, developers in higher income neighborhoods like Lakeview must build affordable units on site or pay into a fund for low-income tenants.