JACKSON PARK — A key element of the Obama Presidential Library proposal calls for the creation of a kid-friendly campus free of cars zooming by sledding hills and areas where people can take quiet walks to the lagoon.

But to do that, a big chunk of Cornell Drive running along the west side of Jackson Park needs to go — raising large logistical issues about where that displaced traffic will go.

In addition to being a key shortcut for park neighbors, it's also the direct path from Lake Shore Drive to the Chicago Skyway, by way of Stony Island Avenue. Commuters aren't going to stop using Lake Shore Drive to reach the Skyway — so they are going to need a new path if Barack Obama gets his wish.

RELATED: Barack Obama Has Big, Bold, Optimistic Plans For The South Side

The most likely alternative would be to route the majority of traffic coming off Lake Shore Drive to Hayes Drive, a road cutting through the center of the park. That would connect to the part of Cornell not being closed, allowing drivers to then reach Stony Island. 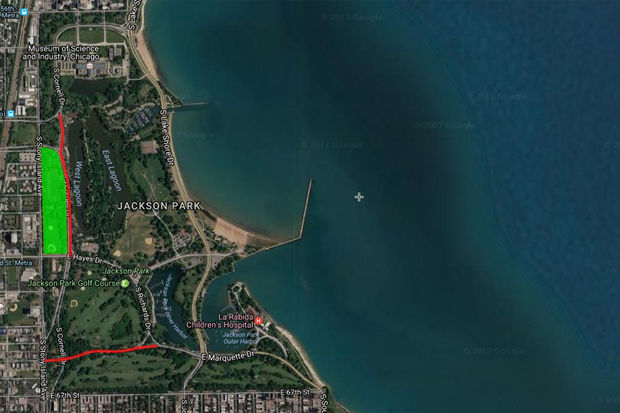 The red lines show roads that are proposed to be eliminated. Obama on Wednesday made his pitch for eliminating a portion of Cornell Drive next to the site of his library's campus, shown in green. City officials have said there are proposals to close sections of Marquette Drive as well as part of the plans to remake the golf course.

Another option is diverting drivers off Cornell Drive to 59th Street just as they curl around the Museum of Science and Industry. That would require a major overhaul of the 59th Street/Stony Island intersection to handle the new onslaught of drivers.

The concerns over closing Cornell were clearly on the former president's mind Wednesday when he presented his vision for Jackson Park. He made an impassioned argument for why it's needed, essentially launching his own public lobbying effort to shut down Cornell.

But the proposal presented didn't dwell on how designers would solve the problems created by a shutdown.

A Chicago Transportation Department spokesman said the foundation's traffic engineers are consulting with the department, but it has not started its own traffic study.

"Going forward, we are going to work with IDOT [the Illinois Department of Transportation] and our local partners as we study and evaluate how best to handle the traffic impacts, and we plan to have a thorough community engagement process to seek input from residents," said Michael Claffey, a spokesman for CDOT.

Obama's proposal calls for Cornell Drive to be shut down from 59th Street to Hayes Drive/63rd Street.

The former president said initial traffic studies showed rerouting traffic from Stony Island and Lake Shore Drive would add one minute to people’s commutes at worst, and he’s instructed the traffic engineers to find a way to get it down to zero.

A 59th Street/Stony Island intersection overhaul could be the solution, as alternative intersections to the north would put commuters in conflict with parents trying to pick up kids at the University of Chicago's Laboratory School and Bret Harte Elementary.

The option to the south is the intersection of Jeffery Boulevard and 67th Street where Lake Shore Drive leaves the park, but that puts commuters eight blocks farther away from Stony Island Avenue in the posh residential area of the Jackson Park Highlands.

The traffic study has not been released publicly and may include other major changes, like changing some streets that are currently one-way.

City officials have said there are still proposals to close Marquette Drive between Stony Island Avenue and Richards Drive to make room for the consolidation of the Jackson Park and South Shore golf courses.

"This is a once in a lifetime opportunity for the entire city," Emanuel said, pledging to oversee a "collaborative" process that ensures that everyone's voices are heard.

Obama said Wednesday that he thinks its necessary to close a portion of Cornell Drive to improve the park and make the library's campus work.

“If you have that road, there’s only so much you can do — you can’t have sledding into the road, you can’t walk to the lagoon,” Obama said. “What we have said is, let’s restore Jackson Park to the original vision.”

Community groups have been split on whether to maintain Cornell Drive, reduce its size or eliminate it, with 5th Ward Ald. Leslie Hairston advocating that the road remain.

Hairston called closing Cornell Drive a "bad idea" when it was initially floated in February, questioning where traffic would be displaced to if it's closed. The road is a shortcut for commuters coming off Lake Shore Drive trying to get to Stony Island Avenue and onto the Skyway.

Hairston said after she heard Obama Wednesday, she’s open to his idea.

“I liked what I saw,” Hairston said after reviewing the plans Wednesday.

Parks advocates have asked for a long time to do something about Cornell Drive.

Louise McCurry, president of the Jackson Park Advisory Council, said she’s wanted to close the road to make it easier to get around the park.

“We’ve been asking for it to be closed for six years because it's dangerous,” McCurry said.

She said the six lanes of traffic have been a problem for pedestrians, and two children have been injured crossing the road in the last five years.

She said agreed with Obama, the road moves the park away from Olmsted's original vision.

Frederick Law Olmsted designed and redesigned the park several times, first as a large park full of meadows, islands and oak savannahs. He later redesigned the park to accommodate the 1893 World’s Columbian Exposition, a plan that cut up a park that has only been cut up more since the fair.

Cornell Drive was added to the park in the '60s over vocal protests of Hyde Park resident and parks advocates, and a bridge in the park is named for one of the Hyde Park residents who chained herself to a tree in an unsuccessful attempt to stop the road from being built.

The plan Obama presented would bring the park back to a certain degree to Olmsted’s original plan, though that plan did not include large structures like the Museum of Science and Industry or a presidential library.

Obama said he liked the idea of the Museum of Science and Industry opening its back doors again so people could wander out into the park to find something to eat from a food truck or explore the park.

“You could visit the Museum of Science and Industry and go right out the back, walk around the lagoon, visit our campus and get a taco,” Obama said. 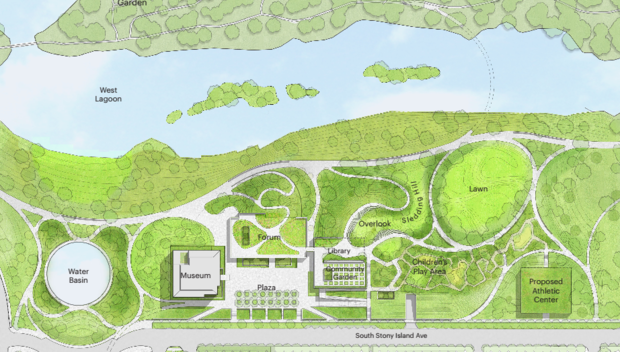 The plan for the Obama Library and Center includes turning Cornell Drive into a walking and biking path. [Obama Foundation] 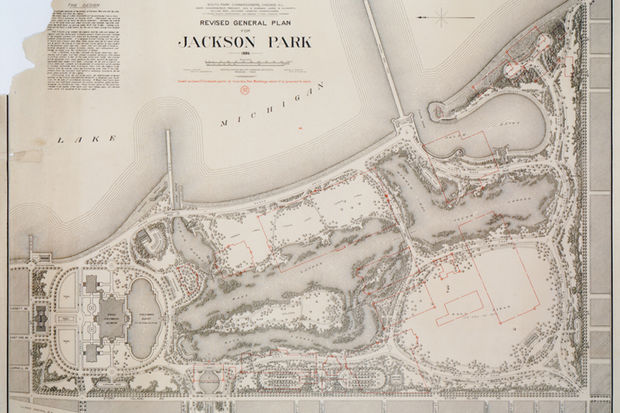 Designer Frederick Law Olmsted had to change his plans for Jackson Park several times to accommodate the 1893 World's Columbian Exposition and its conversion back into a park. [Courtesy of the Chicago Park District]