SOUTH SHORE — The Barack Obama Presidential Library will be "transformational" for the community, the former president said Wednesday as the Obamas finally revealed what the center could look like.

Obama, in his first public appearance regarding the plans, made wide-ranging remarks that showed he was intimately involved with nearly every aspect of the project. Michelle Obama was also in attendance at the South Shore Cultural Center but did not speak.

The images show a large stone structure half-sunken into Jackson Park where Midway Plaisance meets the park. Obama said the library will take four years to build and will bring thousands of jobs across the South Side. He estimated it would draw 600,000 to 700,000 visitors a year.

RELATED: Obama Has Big, Bold, Optimistic Plans For The South Side

Obama started the conversation by revisiting his many ties to the South Side, pointing out that his mother-in-law was in attendance, along with his closest friends and the doctor who delivered his daughters.

“Though we had a formal bidding process to determine where the presidential library would be, the fact of the matter was it had to be right here on the South Side,” Obama said.

He praised the city and said he really wants to make sure that violence isn't the only thing that makes headlines on the South Side.

The design released includes three buildings: a museum, a forum and the library itself, along with a sprawling public plaza.

“There will be a museum embedded in the library. And let’s be honest: We all want to see Michelle’s dresses and campaign posters,” Obama said, adding that the library would have all the things one would expect in a presidential library.

But this will be so much more, he added.

"It's going to be a transformational opportunity for this community," he said. "It's not just a building. It's not just a park, but hopefully this ends up being a hub that all of us can see a brighter future for the South Side."

The foundation is considering adding a Chicago Public Library branch to the campus, but will first get feedback from residents on that, the foundation said. There will be a restaurant, public garden and auditorium — with rooftop gardens atop the forum and library.

Obama said he wants the top to be open to the public and not a private suite for him. 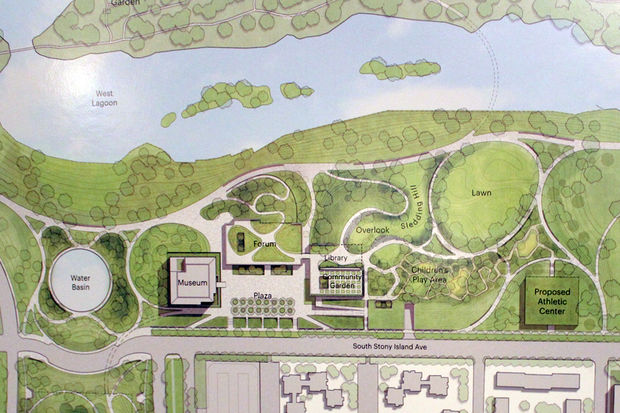 The plan for the grounds would reroute traffic coming off Lake Shore Drive to Stony Island Avenue at 59th Street. [Courtesy of the Obama Foundation]

Obama said he wanted to use the creation of the presidential center to upgrade Jackson Park with some of the amenities that Lincoln Park or Millennium Park have. He even suggested bringing paddle boats to the lagoons, grills, basketball courts (of course) and winter activities to the campus.

“You'll see what involves children’s play centers and a sledding hill. Michelle always told me she was mad that during the winter there was no hill down here,” Obama said.

Maps show Cornell Drive would be eliminated south of 59th Street to Hayes Drive. A forum and athletics building would round out the grounds that would include a garden, sledding hill and walking paths around the park's lagoons.

The athletic fields now on the site would be moved south, according to the plan.

A formal garden at the end of the Midway Plaisance would be converted to a water basin.

Obama said the design was contingent on closing Cornell Drive, but he knew that could cause traffic headaches.

“If you have that road there’s only so much you can do — you can’t have sledding into the road, you can’t walk to the lagoon,” Obama said. “What we have said is let’s restore Jackson Park to the original vision.”

Cornell Drive was added to the park in the 1960s over vocal protests of Hyde Park resididents and parks advocates. Community group members have recently been split on whether to maintain the road, reduce its size or eliminate it, with 5th Ward Ald. Leslie Hairston advocating that the road remain.

“We are now confident that we will not be adding commute times as a consequence of closing Cornell,” Obama said.

There will be mitigation efforts, and at the worst traffic studies show closing Cornell will add one minute to commutes, according to Obama

And he knows parking will be an issue.

“When people come to visit, they’re going to be looking for a place to park,” Obama said.

Obama said the foundation is talking to the University of Chicago and the city about the possibility of turning the eastern edge of the Midway Plaisance into parking with a walkway over Stony Island Avenue connecting to the library campus.

“You could build an underground parking garage here that is landscaped on top and has a little recreation area on top of it and put a few barbecue grills while you’re at it,” Obama said. 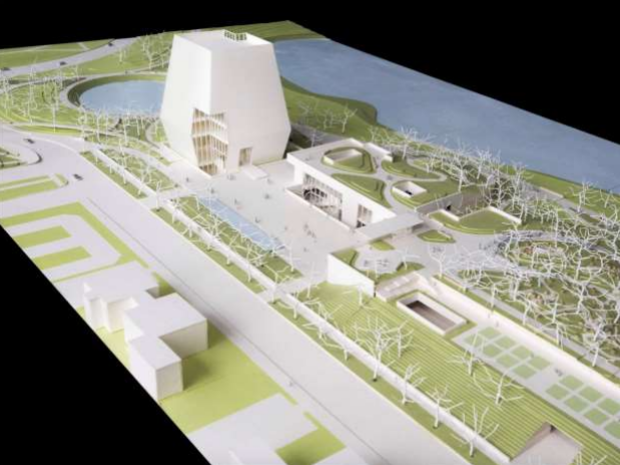 The plan for the grounds would reroute traffic coming off of Lake Shore Drive to Stoney Island Avenue at 59th Street. [Courtesy of the Obama Foundation]

But despite the potential traffic and parking issues, he said people want to go where there are other people.

"It's a good thing to have more people down here," he said.

Overall, Obama said he was very conscious of making the center and park a destination for years or decades to come.

And he promised to keep the community involved in the development process.

“This is just the beginning of the process, not the end,” Obama said. “We’re going to be in continual conversations with the community about how we make this work for you.”

Before Obama spoke, Hairston welcomed the Obamas back to the neighborhood.

"We are so happy to have you home," she said. "You know these communities, the lakefront, its parks. You know them well."

The Wednesday event is the first time the Obamas have appeared publicly to discuss plans for the presidential library. They have always made announcements through pre-taped videos in the past, in part because Barack Obama was still serving as president.

The former president has returned to Chicago since leaving office and in February told community leaders in a private meeting that he would be personally engaging with the community on plans for the library.

Architects Tod Williams and Billie Tsien said they had been sent back to the drawing board at least once by Obama, who they said wanted a more ambitious design than what they initially presented.

Obama also was expected to appear at an invite-only event at the Chicago Club on Wednesday.