Judge in CPS Case: 'Can Chicago Ever Be A City That Works For Its People?'

THE LOOP — Former Chicago Public Schools CEO Barbara Byrd-Bennett was hit Friday with a 4 ½-year federal prison sentence for defrauding the school system she was hired to lead.

U.S. District Judge Edmond Chang called her crime "egregious" and another example of public officials thinking they can get away with cheating the public. Byrd-Bennett has to turn herself in Aug. 28 and serve her time in a federal prison in West Virginia.

After the judge wished her well, Byrd-Bennett, 67, broke down crying.

Earlier in the afternoon, before being sentenced, a sobbing Byrd-Bennett addressed the judge and said she was ashamed. Prosecutors said she steered $23 million worth of contracts for principal training to her former firm in return for kickbacks of cash, meals, tickets to sporting events and a job after she left CPS.

"I stand here at the most difficult moment of my life," she told Chang. "What I did was wrong. I am ashamed. ... I have no one to blame but myself. I am responsible."

Byrd-Bennett cried throughout most of her 10-minute speech to Chang, and became nearly inaudible at times.

Byrd-Bennett, whom her former boss Mayor Rahm Emanuel used to call "Triple-B," told Chang she struggled to cope with "relentless budget deficits," having to close more than 50 schools and seeing the impact of Chicago violence on students and their families.

The job, she told the judge, was much harder than she thought it would be.

Byrd-Bennett said she had been blinded by "her ego and a sense of entitlement."

The former schools leader said she would have to live with her "tarnished reputation" for the rest of her life.

"I hope and pray I can redeem myself," Byrd-Bennett told the judge.

Earlier in the hearing, U.S. Attorney Megan Church said Byrd-Bennett "sold out" her integrity for the promise of cash. She asked Chang to hold Byrd-Bennett accountable — and send a message to other city officials.

Byrd-Bennett's conduct "cost CPS million of dollars that it does not have," Church told the judge.

Church said Byrd-Bennett's case was "heartbreaking" because she "should have been looking out for students, parents and teachers."

"Instead, she chose to rip off the school system," Church said.

Not only did Byrd-Bennett defraud the school system, but she discussed the scheme over emails "openly, brazenly," Church said.

"She did not think she was going to get caught," Church said.

Her indictment included an email she sent to her former firm, saying, "I have tuition to pay and casinos to visit."

She reportedly planned to pay tuition for her twin grandsons.

Michael Scudder, one of Byrd-Bennett's attorneys, agreed she committed a "terrible breach of the public trust," but asked Chang to consider her entire career, which he said Byrd-Bennett had dedicated to children.

Chang said he had done just that in deciding on the 4½ year sentence.

Byrd-Bennett's conduct "infected" the public education system and exacerbated the budget crisis engulfing it, he said.

Chang said he believed Byrd-Bennett was truly remorseful, but the evidence proved that her crime was "not a spur-of-the-moment lapse but a scheme designed to span months and years."

The sentence was designed to send a message to other Chicago officials considering committing illegal acts to line their pockets.

"It is distressing that Chicago seems unable to shed its tradition of public corruption," Chang said. "Can Chicago ever be a city that works for its people?"

The judge also ordered Byrd-Bennett to pay $102,000 in fines and restitution.

In October 2015, Byrd-Bennett pleaded guilty to a single count of wire fraud as part of a plea deal with federal prosecutors, admitting she steered the contracts.

Lawyers for Byrd-Bennett — who earned $313,000 in salary and benefits as CPS chief — had asked federal officials to sentence her to no more than 3½ years in prison.

Adam Collins, a spokesman for Emanuel, said Byrd-Bennett "turned her back" on Chicago students.

"Barbara betrayed the public trust. She broke the law. She turned her back on the very children she was entrusted to serve, and the children of Chicago are owed much better than that. Today's decision is a reminder that no one is above the law, and with justice now served, the entire CPS community can continue to focus on building on the record of academic success of Chicago students," Collins said.

A statement from the Chicago Teachers Union said Byrd-Bennett's sentence made it clear that it was long past time for Chicago's school board members to be elected — rather than appointed by Emanuel, who hand-picked Byrd-Bennett.

The scandal is just one "scandal on a list of embarrassments and transgressions Chicagoans have endured under the Rahm Emanuel administration," the union said in its news release. 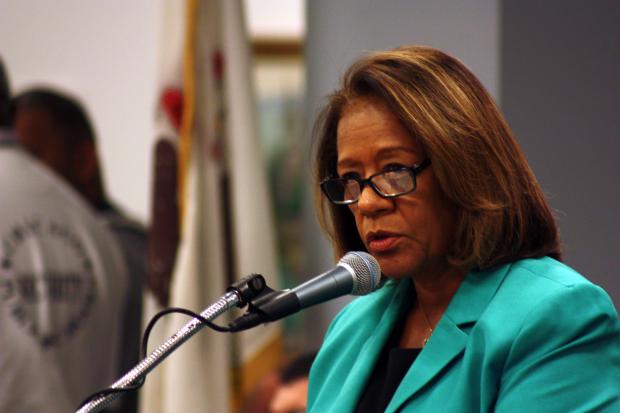 Byrd-Bennett's lawyers said she would use a shortened prison sentenced to convince superintendents and school districts of the need to "redouble their efforts to avoid conflicts of interest with consultants and providers.”

Although she initially lied to investigators and deleted incriminating emails after the investigation had started, Byrd-Bennett later pleaded guilty and agreed to testify against Gary Solomon and Thomas Vranas, co-owners of the SUPES Academy and Synesi Associates.

Byrd-Bennett never saw a dime from the scheme, agreeing to be paid 10 percent of the contracts' value in "bribes and kickbacks" as a so-called "signing bonus" on the day she returned to work for Solomon and Vranas.

Had she not pleaded guilty and agreed to testify against Solomon and Vranas, Byrd-Bennett could have been sentenced to more than 20 years in prison.

In March, Chang sentenced Solomon — whom prosecutors called the mastermind of the scheme — to seven years in prison. Solomon has appealed that sentence.

Byrd-Bennett has been sued by CPS for $65 million.