"You will be in school," he told students at a hastily called news conference at City Hall. "Kids belong in the classroom."

The announcement comes after CPS threatened to shut down schools June 1 without more state funding. The last day of school will be June 20, as originally scheduled, Emanuel said.

CPS Chief Executive Forrest Claypool said that Emanuel would "use the powers of his office" and "look at all options" to come up with the more than $100 million necessary to keep Chicago schools open past June 1.

They mayor sidestepped a reporter's question asking if he would borrow from the city's tax increment financing districts to fund a full school year.

"What's not going to be an option is missing a day of school," Emanuel said.

RELATED: JUDGE SAYS STATE 'OUT OF TOUCH,' BUT HE RULES AGAINST CPS LAWSUIT

The mayor said he wanted to give parents and students "peace of mind" that they will be able to finish out the school year.

"We are not asking for special treatment for Chicago students," Emanuel said. "We are asking for equitable treatment," he said of the city's lawsuit. 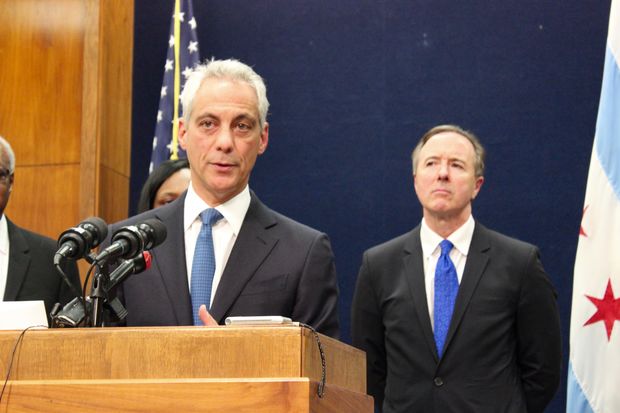 School Board President Frank Clark said he did not know precisely how CPS would be funded.

"We are going to make this work," Clark said.

Emanuel said only that "all options are on the table" to fund CPS, including taking money from the city's TIF districts — a move that he has resisted for six months.

"We will meet our obligations," Emanuel said.

TIF districts capture all growth in the property tax base in a designated area for a set period of time, usually 20 years or more, and divert it to a special fund for projects designed to spur redevelopment and eradicate blight.

Parents who showed up at Friday's court hearing were emotional about the prospect of a shortened school year.

An early end to school could mean "more parents on the news crying about their children getting shot or killed," said CPS parent Lynette Boyd-Peoples, her voice choked with emotion, after the ruling.

Boyd-Peoples — who has a 13-year-old in CPS — said she also worries more kids could end up incarcerated if they're not able to go to school. She was joined by other parents who cheered as she spoke.

Gun violence typically spikes during the summer in the city, and more than 30 school-age children were shot or wounded in Chicago during CPS' summer break from  June 22 to Sept. 5 last year, according to DNAinfo data.

Keeping kids in school and after-school activities often is used as way to keep them from being victimized or involved in crime. It may even prevent violence down the road.

"I have a 13-year-old son. My son is worrying about is he going to graduate" Boyd-Peoples said. "He's been doing good in school and everything he's supposed to do."

The rest of the funding goes to schools outside Chicago, where districts are predominantly white, attorneys said.

"Cuts have already impacted the classroom," one attorney said at an April 19 hearing, predicting that CPS eventually will have to "shutter its doors."

The state's approach to funding amounts to a $500 million gap for Chicago, said Claypool.

But Gov. Bruce Rauner's office lauded the judicial decision in an emailed statement, saying the lawsuit had been a "distraction" that was now "behind us."

“Gov. Rauner’s bipartisan commission has recommended changes that will create an equitable school funding formula to better meet the needs of each student within every school district in our state," the Governor's Office said. "Instead of pointing fingers and blaming decades of fiscal mismanagement on a governor who has been in office for two years, CPS should be urging lawmakers to pass a balanced budget that includes changes to our education system that will better meet the needs of every student.”

RELATED: What Will Happen If Schools Close June 1? Here's What We Know — And Don't

Though Valderrama dismissed the suit, he harshly criticized the state, saying portions of its argument showed it was "starkly out of touch" and saying it hadn't denied that its funding practices disparately impacts children of color.

"To say the current [process] of funding is broken is to state the obvious," Valderrama said.

Cash-strapped CPS, which has been trying to balance its budget by making cuts, could have saved $91 million by ending school early, according to the CPS court filing. But CPS would have lost $58.5 million in state funding next year if it had ended school early.

Moody's Investors Services dubbed CPS one of the "most vulnerable districts" in the state financially on Thursday, according to Reuters. The rating agency said CPS is one of several Illinois school districts that "face increasing cash flow pressures or the potential for a material decline in reserves amid the continued [state budget] delays," Reuters reported.