JEFFERSON PARK — As of Thursday, anyone who gets arrested in the city's sprawling Jefferson Park police district will be taken past a new presence guarding the cells: a 4-foot fiberglass statue of a German shepherd, fittingly named "Jefferson."

The first permanent installation of the Chicago Police Memorial Foundation and PAWS Chicago's "K9s for Cops" program, Jefferson is covered from scruff to haunches with painted scenes of the Far Northwest Side and portraits of officers killed in the line of duty.

Through the program, which was launched this year, any business in Chicago can pay $2,000 to sponsor a blank, 4½-foot dog statue and commission a Chicago artist to paint it. For another $500, they can keep the statue for themselves.

All the money raised by K9s for Cops will be split between the foundation — which provides for the families of officers wounded or killed in the line of duty — and PAWS Chicago, an animal shelter with three locations in the city.

Most of the fiberglass dogs will stand watch along Michigan Avenue between July 23 and Labor Day before being auctioned off, but Lt. John Garrido wanted the first statue to have a home in his district's headquarters.

Garrido took up a collection among rank-and-file officers in the district to pay for Jefferson, throwing in $300 from his own foundation, which picks up stray dogs and arranges for them to be adopted.

"This was really the perfect way to marry my two passions," said Garrido, who's also helped organize multiple neighborhood fundraisers for the memorial foundation.

All along Jefferson's upper body, Bucks painted portraits of seven police officers killed on the Northwest Side in the last century, including some who served before the present day district was established. Below them are pastoral images of landmarks in Jefferson Park, Portage Park, Norwood Park and Edison Park — all neighborhoods served by the district.

It brings a unique flash of color to the headquarters, which otherwise looks just like the other 21 stations around the city, according to district Cmdr. Bill Looney.

"It's something to get people talking. They'll come in and ask what it is, and we'll tell them that he's our mascot," Looney said. "I think it's only a matter of time before it catches on in other districts too." 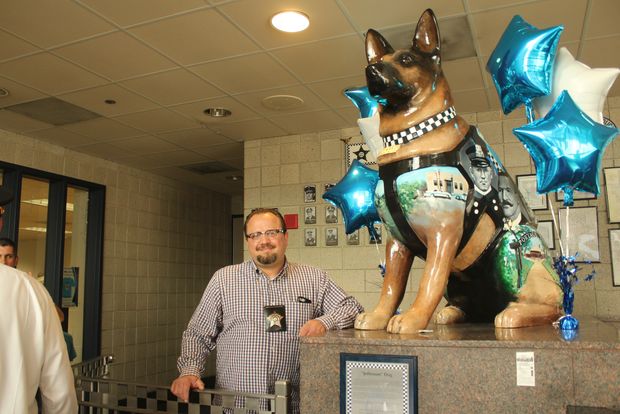 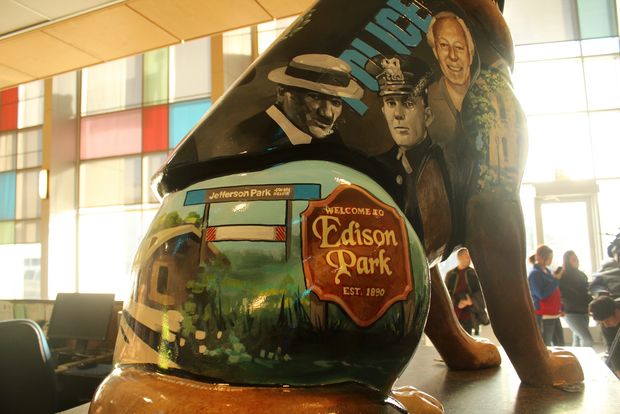 The statue was painted to show the faces of officers killed in the line of duty, as well as landmarks from multiple Northwest Side neighborhoods. [DNAinfo/Alex Nitkin]